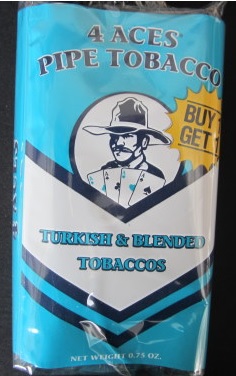 4 Aces Turkish offers a blend of Virginias, Burleys and Turkish for a little extra spice in your smoke.

Ha-ha. Went into an Indian shop looking for a pouch. This is all they had. It was a buy one get one free. I bought one pack and he gave me 4 for free. They don't sell. I lit it up. It was the fastest 10 min. Smoke in history. Taste was ok. Burned fast. Mixes well.

Bought a couple pouches at a little country store--only thing they had. Kind of dry, so I packed some and breathed into the pipe bowl about 4 times. Actually, it was not bad at all. The Oriental has really a dry, slightly sour taste that I liked but not offensive or strong, almost as light as a well-done dressing. I smoked it in a MM cob that I bought at the same store, two to a pack.

Old German Puffer is right about this stuff: it burns like gunpowder.

4A Turkish is not garbage tobacco and I was surprised that it is actually smokable. This is for someone wanting a cheap (or quick) smoke or who can't find anything else, IMO. But if you have some, mix it with VA or any Balkan or English blend; it mixes surprisingly well. I hate to admit this but I mixed some with some dried-out Borkum Riff Whiskey (cost $1.00 on a manufacturer coupon deal and BRW was the ONLY pouch tobacco in the only store, a foul little Winn Dixie, in the area carrying pipe tobacco) that I had rehydrated. I gave it about three weeks and the mixture was actually smokable.

Not great tobacco, but I'd smoke it again if circumstances arose. Two stars.

I was looking for a burey, turkish mix that I could add to a hybrid VaPer mixture that I'm working on. It just happend to be the cheapest thing in the local tobacco store. I tried several bowls by it self and it wasn't half bad. kinda reminded me of half and half pipe tobacco without the herbal note. Smokes really quick, but it's best when used as a support mix. My VaPer mutation that I created smoked remarkably well with this stuff. At least it leaves light ash...

Age When Smoked: right out the pouch

Similar Blends: Half and Half..