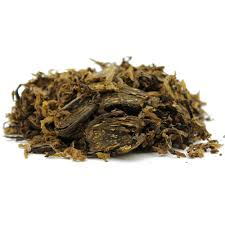 Manufactured by spinning tobacco leaves into a thicker rope than the standard Curly Cut which is sliced to produce tobacco circles. The tobacco is spun using bright Virginia wrapper leaves for a milder taste.

The grass and hay, mildly citrusy bright Virginia is lightly more obvious than the darker Virginia, which offers a little dark fruit, and some earth. The touch of Lakeland contrasts and compliments the floral quality of the tobaccos, which aren’t very sweet. The nic-hit is mild to medium. Won't bite or get harsh, but has a light rough edge. Burns clean and cool at a reasonable pace with a little inconsistency in flavor. Leaves little moisture in the bowl, and needs an average number of relights. Has a decent after taste. Not really an all day smoke.

This blend is the second of three 2 oz bulks in pint canning jars that I bought last April from a familiar and trusted Ebay seller. The first was Gawith, Hoggarth &Co.'s Kendal Kentucky and this blend is their Curly Cut Deluxe Sliced. I wasn't particularly happy with the Kendal Kentucky and I feel just the opposite about this blend. First of all, it makes a wonderful display in the jar made up of about one third spun circles and the rest in circle remains. It shows a fine varigation in light browns to almost black in the spun disks and looks like it was darkened by some process on the surface when it was in the spun log stage. The jar note was unique and reminded me of a combination of bran muffins and apple sauce all at the same time. A long time pipe smoking bud of mine and I loaded up and lit up at the same time. He was the first to exclaim that this is a good tobacco but I wasn't far behind him. Soft and round yet full of flavor, this blend's quality was very apparent and I feel it is the best matured Virginia blend I have ever had the pleasure to smoke. Oh, as to the Lakeland essence, it was there in the early stages but had noticeably declined by about the one fourth stage of the bowl. The decline was rapid and, by the one third point of the bowl, it was gone. The best matured Virginia I've ever smoked, one of the best Virginias I've ever smoked and one of the best pipe blends I've ever smoked all adds up to an enthusiastic four stars.

Similar Blends: I'm not a matured Virginia smoker, so I don't have a lot of blends to repair to in my memory. It looks like Mac Baren Plumcake, but they are worlds apart in the way they smoke..

Another one oz sample, this one is mostly a ready rubbed cut with some coins mixed in. Brown with an orange hue. Bag aroma is straight tobacco with the barest whiff of Lakeland scenting.

The scenting is even more faint in the taste but it is there - barely. This is mostly a straight lemon Virginia with some processing to lightly stove it. Sort of a cross between Bright CR Flake and BBF, with the emphasis on the former. A moderately rich tang and good but not overwhelming sweetness. Will bite if pushed, so a nice slow sip works best. Complexity is nearly absent but like most G&H blends, this one starts out very nice and improves down the bowl. The final third produces a richness and a darker sweetness (like going from a sugar cookie to a graham cracker) that I prefer. I may try parfait-ing this on the bottom. Overall this is a very good if not great blend that is ordinary enough not to make my rotation but good enough to enjoy on occasion. Try it if you want to test the waters of straight Virginia and want something that won't make you miss your more aromatic blends.

The appearance of the blend isn't at all as I expected it to be. The pouch does contain a few coins but the majority is more like ribbons. The smell is one that suggests a very delicate addition of flavour. It's not a heavily cased smell but there is a slight liveliness as well as a massive grassy aroma. Filling my pipe is simple with this, like I said, the majority of the blend is in ribbons.

The smoke doesn't have any extra flavours to it. The only taste that comes through is a massive grass/hay type Virginia one; it proves how good a straight Va can be. Although it's simple, it's not boring! I don't get a great deal of nicotine from this, it only creeps towards medium if I puff like crazy! This burns good; it only really needs a good smoking technique to keep it in line rather than regular tamping/re-lighting method.

This is a good, natural tasting blend; well worthy of full marks.

Was conned into buying this by a very persuasive tobacconist in Stratford-Upon-Avon. I'd spent a fortune on cigars in there and wanted to buy some pipe tobacco to round off my order. And pipe tobacco was my excuse for going into this shop in the first place, which somewhat appeased Mrs RH while she had her hair done. I quickly realised that the pipe tobacco offerings in this shop were not that more uncommon than a visit to Morrison's tobacco kiosk. There were only about 9 jars of loose tobacco - mainly Lakeland blends, which I abhor - and precious little in the tins and pouches that I hadn't already tried.

So buying 25g of this actually seemed like a good idea at the time , as I am always getting stuck with 50g quantities of tobacco blends I don't care for, with no-one to inflict them on.

This one seemed the best of a bad bunch (which even the shop assistant admitted) and, after prising my way out of the smallest humidor I've ever seen this was thrust under my hooter for inspection.

I liked the look of it, with the little 'wheels' as I call them and the aroma was classic virginia sweetness. High score on the nosegay then.

It was a bit wet so I decanted it into a small jar and let it dry out a bit. It's a very coarse cut, and in retrospect I should have ground it out fully, but I didn't, I did a light load with minimal rubbing out.

It was an absolute swine to keep alight. I must have used half a lighter on it before I finally got it going. Still too wet I thought, so I persisted. And persisted and persisted.

Taste was zero, aroma, zero. Different pipes were tried, including, my super-smoke-anything-in-it olive wood pipe and still zilch on both counts.

I'll batter my way through this blend, happy in the knowledge that I didn't buy 50g of this stuff. The opening aroma just barely stops this one from getting a worse rating.

Oh yes, and to that excellent salesman in Straford who cleaned out my wallet - your camacho cigars were appaulingly awful.

Pipe Used: All of them

Have always liked curly cut tobaccos and am sorry that there are so few about. This one arrived with most of the discs broken into ribbons which were surprisingly long. Must have been a rope of some diameter consisting of dark, red and lighter strands. The aroma is pleasant, of hay, grass, bread rolls, and seems to have a very light topping of something vaguely reminiscent of applesauce. It packs very easily and takes well to the match. The first puffs are sweet, bread-like and mildly creamy. Tannins kick in with the second light, smooth tannins, which supply some backbone and spice but no real bass notes. It does develop a certain earthiness in the second third of the bowl when it hits its stride which it maintains with little change until the end of the bowl. CCD is a serviceable and easy smoke. It burns very well and requires little attention. Its primary elements are sweetness and tang. The graham cracker sweetness reminds me of the Ecuadoran Habano wrapper Dunhill uses in its Heritage cigar series. The tang includes spices that hint at cocoa, coffee and, maybe, cedar. It leaves a pleasant after taste and always leaves me wanting another bowl of tobacco (albeit, perhaps, of stronger fare).

The charm of Curly Cut Deluxe lies in its tasty lightness and the fact that it is so incredibly easy to smoke. I could not get it to bite.

This might be a great smoke for anyone who is 1) just beginning to smoke a pipe or 2) looking for an easy introduction to virginias or 3) trying to find an honest and easy going all day smoke.

It’s not a world shaker, and I don't know if, or how often, I will get back to it, but it is certainly worth a try.

Age When Smoked: About 18 months