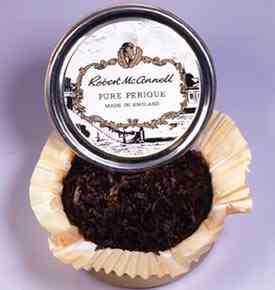 A touch of this will add spice to any blend.

Although this is an enjoyable, fairly rich and flavorful version of Perique substitute, you can tell upon opening the tin that it isn't authentic (or entirely authentic) perique. It comes in thick, crinkly ribbons of not entirely uniform shades ranging from tawny amber to dark brown. Still, it has a wonderful aroma and is nicely packaged, but if you want authentic perique the obvious choice is "McClelland Blending Perique" (from their excellent and reliable "Tinned Blenders" line).

Conversely, is nice to blend with if you know what to expect. It has a rich, almost creamy/velvety feel and adds a taste that might be more easily enjoyable for those not ready to use St.James Perique for their own blends. Also, I find its nicotine potency a little less likely to overwhelm. It makes a nice sort of VaPer component, especially in taming some stronger Virginian bright tobaccos that might create a bit of a 'sharp' or overwhelming blend, especially in conjunction with an authentic Perique. Note that it's hard to assign this tobacco a really accurate room note because its aroma it is, by definition, blended with other components.

I haven't included a review of the McClelland perique for the simple reason that theirs "is what it is", nor have I listed the McClelland's under "similar to" because it is similar only in taste and not in actual species.

The tobacco doesn't smell nor taste like Perique to me, but is quite good as it is! The tin note is rather cigar-ish, woodsy and somewhat smoky... with a bare hint of the signature "dark fruit" real Perique offers.

As it's marketed as "Perique", I'll only give it 2-stars! But by itself it's a solid 3-star blending tobacco, that spices up a blend quite nicely! ;-)

Edit: Ah, people mentioning it to be "Green River Burley"? Isn't GRB supposed to be somewhat Cavendish-ish? This tobacco definetly isn't! It's a rather stout tobacco with some cigar-ish (mind the "-ish", no real cigar flavors in here) notes to it for me.

I bought two tins of this a week ago and tried one this evening. Upon opening the tin, I noticed an extremely moist doilie and this had the strongest worm dirt smell I have ever encountered. Before I begin my brief review, I have read quite a number of reviews that call this fake. This is my opinion and you can take it with a grain of salt if you wish. If it looks like perique, smells like perique and tastes like perique then it is perique. Is this Saint James Parish perique? Probably not as most perique is Acadian perique anyway. There is an excellent article from pipesmagazine.com dated Jan 2010 about perique and I am paraphrasing but to maintain supply and consistency many years ago Kentucky Green River Burley was mixed in with Saint James perique and processed. This was referred to as Acadian perique and was and is used in most pipe blends. Also, Saint James perique is a lot more expensive. I added some of the McConnell to Match Elizabethan and it really amped it up quite a bit. I also smoked a third of a bowl as is and did get somewhat of a head rush. This is good as a condiment to tobaccos and I am no expert but have bought pure perique in the past and to me this is perique. So you can put that in your pipe and smoke it. 😊

Fake,nothing to do with most noble Perique.Hell into a tobacco tin.To save the stupid waste of money I tried mixing with some virginias,orientals only to finish them like manure for the plants.I can´t understand why this brand sell the most glorious syrian Latakia and in a similar tin this devilish stuff.If somebody can survive to this smoke will be among survivors of the next atomic war.

Purchased From: the devil

THIS IS NOT PERIQUE. As far as I know Perique this is not one of them....... But is a strong perique like tobacco and almost interesting one. Take care, is very moist and you should left a little for a better taste. Anyway is not a regular pipe tobacco and you should act accordingly.

I ordered three tins of this. If it isn't real Perique as others have noted then it is a very close clone. I have "real perique" from some years ago in my collection, a very small amount but I compared this to the McConnell's Perique and found it very similar in taste. The nicotine kick was slightly less. It blends well with a variety of other pure tobaccos. Burns clean and dry, do tongue bite(even straight). Cavendish with a pinch of this is a fine smoke in itself. I do recommend this to all Perique fans nevertheless.

I cannot recommend this as it's description says Perique. It is by all means a good processed green river Burley, but Perique it most certainly is not.

Blends well with golden VA's though, but then I'd really go for some pure Burley instead.

How do they get away with this stuff?

From my research, this is NOT the real stuff from St. James Parish but is a knockoff. I'm checking on this now to confirm it.

As a fake perique this gets one star and I can't recommend it. As a strong tobacco to blend with lesser blends (lesser in strength), this works well...so three stars for that. But again, This is not perique and I'm upset that I didn't follow my gut and get McClelland perique.

This is indeed fake perique and does not produce the same effect as the real stuff. McClellend's perique is supposedly the real stuff that they have had in stock for some time now. This shares some characteristics of perique, but its not to my liking and it is not nearly as full flavored or as aromatic. Nicotine content is less as well.

I blended a small batch of Virgina, Perique, and Lataka, just for couple bowls, man, that peppery feeling you get in your nose, throat, and maybe other parts, is unreal, go easy, the tin says it could be smoke alone, I found a pinch is alot, But I like it.

The is my favorite brand of blending Perique. It is packed in a tin, and when opened the paper packing is damp and stained with the exuded moisture of the tobacco. The cut is not a gind or a chop, but thin ribbons, like Dunhill London.

It has the smell of pickled fruitcake (which, in this case is good) but despite the moist packaging, the tobacco is not goopy.

This has been a regular addition to many a tobacco that has started to become a little boring or one dimensional. If I went into details, I might be branded as a heretic, so I will practice a little rare forbearance. Because Perique has been regularly described as a background condiment however, I do not find it too terribly wrong to mix a little in with some of the great English and Virgina brands of the world (if you get my drift). Perique, at least in my book, is a fantastic background note and is like salt and pepper, as opposed to ketchup and mustard.

This is a fine brand of an important blending leaf, and IMHO, should be around to "season" other tobacco as the smoker sees fit.

Some reviews say this is not real perique, but whether or not this is real perique or a variation on it, it does what it's supposed to do. Provide a peppery, musty and fruity taste to your blends, change the PH to reduce tongue bite and add strength by making nicotine more easily absorbed.

It's a great thing to have on hand and the price is the same as any other tin. I think it's definitely worth it if you like perique. I didn't really notice a difference between this and the "real thing" when I added to blends vs other va/per blends I smoke.

I smoked this straight from a freshly opened tin. It was very moist, and the paper "lid" soaked. The smell of the content is rather foul and sour. It is easy to pack. The smoke is warm, eventhough it is necessary to re-light the tobacco often. It burns quickly to fine ash. The taste in my opinion is very similar to a cigar, strong and spicy-peppery. It leaves and ashy taste in the mouth. The tobacco is not too strong nicotine wise, and it was okay to smoke it indoors on an empty stomach and three cups of coffee, although not to pleasant. As this is the only Perique I have smoked straight I cannot verify it's authenticity, regarding the other comments, nor can I recommend it for blending - yet. As for smoking it straight, I might do it again in a couple of months.

As good as fake Perique (which is pretty much all you can get these days) can get. It does what you expect it to do.