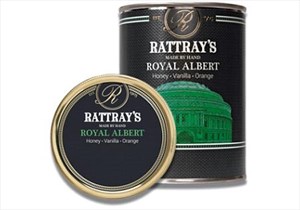 Royal Albert is an evenly balanced pipe tobacco with a smooth exquisite blend of three different Virginias, sweet black cavendish and fragrant burley. It has been perfectly crafted with a lovely aroma of orange, honey and vanilla.

Oh my, the tin smells aromatic! On the plus side though, it's an aromatic where the majority of the blend isn't jet black: actually, it looks like there's less Black Cavendish than Burley and Virginia. Another difference for an aromatic is the water content: yes, it's a bit too damp, but I literally mean A BIT. The ribbons are fairly course, not like a few blends where it could qualify as a being shag cut! And igniting's easy, so that leaves the actual smoke:

My inaugurate thoughts were good, it seemed to have just the right quantity of aromatic ingredients to gain applause without masking the tobacco's entirely. That lasted roughly ten puffs, and then I noticed the heat of it. It's not that the flavour's bad, it's actually quite good: mainly citrus zest, but with a touch of sweetness, and a bit of vanilla cream. The burn however, takes heat to a new level, and it can bite a little too! Regarding the Citrus Zest, at first light it is indeed a kind of nebulous fruity taste, but after about ten minutes it's easily defined as being an orange flavour. The honey and vanilla aren't anywhere near as heavy, but add the finishing touch to the smoke.

The nicotine's about medium and the room-note isn't too full: it has a fruitiness, but it doesn't plume the room with smoke.

If it weren't for the heat of it and slight bite I'd maybe consider highly recommending it to aromatic lovers, but it's too damn hot:

Three stars for taste, yet one star for mechanics: that would make two stars about fair.

I'm just gonna cut straight to the chase here: It burns like a volcano, it bites, and it tastes like pure acid in some kind of citrusy form. It heats my pipes too much, it bites too hard, and it's too strong on the citrus side. I can't enjoy this. Absolutely horrible, which is a shame, cause Rattray's got plenty of amazing baccys...this simply fell short. I cannot recommend this to anyone, unless you love having your mouth filled with acid and heat. It smells delicious out of the tin, honey, fruits...sweetness, but it just...no, it burns too damn hot, despite attempting to dry it! I couldn't even finish the bowls I loaded up, just emptied the pipes, cleaned them, and picked up a soothing tin of Old Gowrie instead.

Did not like the orange taste of this one. Could not detect the vanilla or honey at all. Can be due to my not so big love of the orange taste. But it was easy to smoke. Would recommend it if you like oranges and a quite mild flavored aromatic.

Age When Smoked: Direct from opening.

Described as an aromatic, i think it nearly goes english with its virginia tastes, gives some pleasant sweetness on the exhale, a teeny bit of vanilla, retrohale gave a hint of orange notes, a rather stable blend, a sort of lunch break smoke

Smells great, a honey led scent with hues of toasted vanilla, almost missing citrus & a fine natural tobacco. Looks quality, almost like an English blend but the black tobacco is Cavendish not Latakia. Ribbons of different Virginia tobaccos. Larger rough cut pieces of Burley. Small ribbons of black Cavendish. Slightly sticky but doesn’t want to clump if pressed between the fingers. The taste is predominantly fine tobacco with subtle sublime overtones of nutty honey. Not like other aromatics I’ve tried, it satisfied the natural tobacco craving also. No orange flavour I can detect.