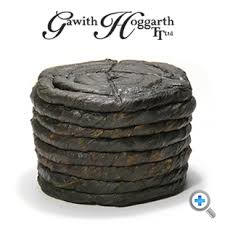 Very strong and overwhelming for my level of pipe smoking. It can be a little difficult to prepare as the coil when rubbed out create big bits of essential leaf. The flavour was kind of nice but I struggled to keep it lit and I didn’t let it dry properly before hand.

I will leave this in the cellar for a little while before trying it again, I will let my experience develop. Not as horrendous as some opinions but experience is needed so you can fully appreciate the smoke.

The ghosting is odd and doesn’t smell great. I used a budget basket briar pipe to start, no brand and I was lucky as that pipe couldn’t be used again. Try this in a cob first and then go to briar.... in my opinion of course

Just under 12 months in the cellar complete and frankly this is a different tobacco. Much nicer, it is very floral, earthy and a hint of dark fruit.. raisins and plums but to each of those flavours add a heavy smokey edge to them. All in all much better aged than new. I will be buying some in bulk and putting it in the cellar for sometime

18 months in the cellar and this tobacco is quite nice. It has developed considerably. I have been to taste the peppery spice on the retrohail, the more distinct sweet grassy smoked tones. In addition to the above flavours. It burns cool and smooth with absolutely no tongue bite at all. It is a lot of invested time but it is more definitely worth the wait.

Purchased From: My smoking shop

Strong!! When I opened the pouch I noticed that very pungent, almost acrid Virginia smell that is usually present in the stronger GH' ropes. It needs a fair amount of drying, when I sliced my first coins they felt a bit tacky so I had to put them aside to allow his to decrease.

It burns well leaving a pure white ash and the smoke is fairly cool with no tongue bite. Sadly I can't be so positive about the taste. There is the flavour of Virginia but this is somewhat concealed by a harsh, bitterness. I think the area that this is best suited to is nicotine satisfaction. To me (who doesn't smoke for N) that seems the only feasible reason for wanting to smoke this. There isn't much of an interesting character to the taste, that is, of course, unless you are intrigued to try something harsh and bitter!

This would, without a doubt, be very good for a nicotine smoker but it doesn't do much for me. One star.

Just when I thought I'd got a handle on what GH twists were about, Kendal Black Bogie throws me a curve ball.

I have said in previous reviews that the GH and SG black twists were pretty much the same beast in different thicknesses. Well, this tobacco tells me I am wrong.

All the other black twists I have smoked have had an overwhelming coal tar or diesel oil aroma, that to me is quite unpleasant. This Black Bogie still has it, but in a much reduced way. This allows for a much more 'normal' tobacco experience. It has a sweet Va taste and aroma, with a fair amount of citrus and dried fruit aromas.

This also burns better than any of the other twists. This might be simply a matter of how old it was before it arrived with me, but since I also found the GH Brown Bogie (and the Black Bogie is just a more cooked version of the Brown) to be well behaved in the pipe, I am ready to believe they are in some ways different to the rest of the twist family either in constituent tobaccos or manufacture. The Black Bogie differs from the Brown in having virtually none of the cigar like aromas of the latter. It is much closer to a true stoved Va.

Another point worth mentioning is that people seem to think the black tobaccos (and I have noticed this in reviews of Latakia blends as well as stoved tobaccos) are stronger in nicotine. Latakia, being an Oriental tobacco isn't usually high in nicotine, and stoving tobaccos (as is the case with Black Bogie) reduces their nicotine. Perhaps people are influenced by their visual perception on this score. Doubtless, the 'smokey' character of the black ropes will also give a psychological perception of nicotine strength. To be clear, this tobacco is no lightweight. It has heft in flavour and nicotine. But it is not as strong as the brown version it is derived from.

I really enjoyed this tobacco. Difficult to give a rating for, because I realise this is an outlier tobacco. For me personally, better than a 3. Unless you have a fondness for this sort of tobacco, probably think of it as a 2.