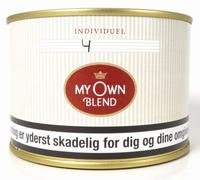 A traditional blend of choice Virginias. The tobacco is pressed into cakes, matured and then cut into flakes. This one has a delicate natural sweetness and is medium in strength.

Once again, I failed to read the description properly prior to opening it up to do a review. I was in the mood for a flake, but opened this: a ribbon!

The blend is presented as quite long ribbons, that are a medium brown in colour. As ever with Paul Olsen, the water content is unquestionably perfect; Paul Olsen's roomy tins nearly always make the blend 'just right' in that area.

Onto the smoke now: the flavour's worth four stars on its own. It's a voluptuous and full Virginia one: full, as in it's a smoke where the taste is 100% Virginia, I don't mean it has a full taste in general. This flavour's undoubtedly from an extremely high quality leaf: it's a very deep Virginia taste, with lots of the mature attributes. It's not as citrus-sharp as is often the case, this has a lot of class and body to it. The burn is consistent from the beginning to the end; it only needs a little tamping, hardly any re-lights, and burns to a pure grey ash.

The nicotine's quite low from No.4: to me, it's no more than mild. And finally the room-note's nice: a basic Virginia one, but pleasant nonetheless.

This is a dazzlingly good Virginia: it's not flashy and not a show off, dare I say it's maybe a touch basic; but that's basic in a GOOD WAY!

Even though I normally prefer some spice in my smoke, it still gets highly recommended as it's such a good quality.

Thanks to StevieB for sending me this very nice smoke in a trade. Good stuff, Steve.

An unadulterated Virginia. Seems to be either all or mostly red Virginia. Main notes are of raisins and earth. Has just a touch of sharpness on the retrohale. Not enough to bother, just enough to give a little edge to the smoke. Fairly rich in flavor. Gets a little bready in the second half. As a stand alone smoke I'd rate it with 3 stars. Not enough complexity for 4. As a blender this will rate 4 stars easy. I'll rate as a blender as that's how I'm going to use it.

Mild to medium in body and taste. No added flavoring. Burns very well.

Age When Smoked: a few months

Purchased From: acquired in trade