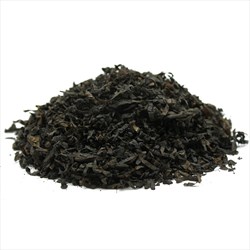 Cavendish isn't a tobacco like Virginia or Burley, it's a method of processing and everyone has their own ways. Gawith Hoggarths is rich and smoky therefore suited to Scottish and English blends. Fire cured Virginia's are chosen and then cooked with a little sugars until jet black.

If anything, I'd say this particular type of Cavendish tobacco has been cased. I personally use it to mix with other tobaccos (Virginias and Orientals), and it seems like it wants to make itself noticeable even if you don't put too much in it. The tin note is rather mellow and sweet and it has a jet black appearance, which in turn suggest this might as well be "American Cavendish" and not "English." For one thing, it is very moist, and it sticks in your fingers too. If only to compare it against other Cavendishes present in other tobaccos, it seems to be very similar to Robert McConnell's The Original Oriental. As for the room note, it is quite nice, actually, and I bet on it your wife will love it, or anyone around you for that particular matter. A tip of advise is you go an use it sparingly (don't abuse it) as it is quite strong. The taste, on the other hand, is sort of mellow, sweet and sour at the same time. Just give it a go and see how you get on with it.

This smells sweet. From the pouch it smells as if it's been given a fairly heavy casing of sugar! The pieces of tobacco are generous in their sizes, being quite quite long and fairly thick. Another area where generosity prevails is water content. Sadly it needs a decent amount of drying time.

Once lit the flavour isn't what I was expecting. It tastes as though it has a semblance of Latakia in it. I get a subtle smokiness all the way through. Not 'strong' but still an addition of smoke. The sweet side is wonderful, exactly as the smell had me anticipating! The temperature of the smoke is brilliantly cool, I could see this being perfect to calm down a harsh blend. Another calm quality is tongue bite. I can be as reckless as I wish and I don't even get a nip! If you smoke for nicotine then smoking this neat would be totally pointless as it contains nearly none of the good stuff!

Although this is targeted at blending I could see it being a good smoke unaccompanied due to the depth of character. Very sweet, quite smoky, and brilliantly cool. Three stars.