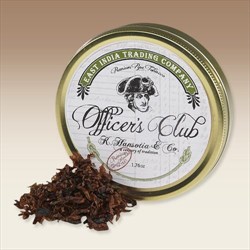 Officer's Club combines Virginias, burleys and black cavendish with rum, gentle spices and creamy vanilla that will make you think of a decadent dessert.

This stuff smells amazing! It was obviously topped with melted Werther's candy, so sweet you can taste the butterscotch (or vanilla rum as per the description).

The trouble is, it is sooo drenched you HAVE to let it dry out for a day or two, since that which has thoroughly stained the paper doily, has a hard time burning straight from the tin. This can be to your advantage however, as it makes an unbelievable air freshener, causing any passersby to immediately crave dessert. Once dried, it remains quite soft and very packable.

Once lit, the flavor lost much of the initial wow factor and there was an almost evaporating alcohol taste (perhaps from the topping burning off) that had a slight chemical bite. It was smokeable, on the milder side of things, but tasted cheap.

I felt bad giving such a pleasant air freshner 2 stars, but in the end, it has to be smokable, and in there was a mutiny brewing in this Officer's Club.

Excellent aromatic if you like black Cavendish with a healthy dose of vanilla. Upon opening, the paper liner was saturated with moisture but the tobacco itself was relatively dry. It took light easily and remained lit all the way through with just a slight tamp about a third of the way down. Thick rich smoke with a strong flavor of the casings coming through. The burley is just enough to keep things rounded while the Virginia and Cavendish are the real stars of the show! Excellent blend!

I like good aromatics, and I figured I'd give this one a shot. The description sounded as if it would be pretty tasty. After receiving the tin, I popped it open and was immediately hit with a coffee/chocolate/vanilla aroma. It showed signs of being saturated with moisture, as the white paper in the tin was stained brown. The tobacco was not overly moist though, and was a bit sticky to the touch. They really turned the casing up on this aromatic! It packed fine and actually took a flame immediately. I didn't have trouble keeping it lit either, which was rather surprising. It produces a pretty thick and rich smoke. The room note is wonderful, and the taste isn't bad at all. It never bit me nor got too hot, but I will admit that I was using extra care to avoid it, as I'm sure the topping would cause it to get pretty hot. I get a "warm vanilla" flavor from this, and I could pick out the tastes of eggnog, cocoa, and marshmallows. I wouldn't smoke it every day, but it certainly wasn't a "bad" aromatic by any means. I'd recommend it to aromatic smokers.

I am smoking this 'guy' now as I write this piece. When the tin arrived it was so so soggy that a brownish coffee like stain lined the bottom of the tin as well as the lid. The whitish wrapper inside the tin containing the substance was sopping wet and brownish in colour. The whole thing reeked of coffee and cocoa and processed chocolate combined with a certain sweetness that made me taste the tobacco raw before drying it out. Needless to say it needed quite some drying to prepare it for smoking. Luckily, I live in a sunbelt region that made drying easier within a short period. The actual smoke itself was very pleasant and gave out a very pretty aroma. It has a mild taste without tongue bite. It burned well and did not need to be re-lit several times over to keep it going. The moisture level remained moderate throughout and it did not leave an unpleasant aftertaste. It could be the dream of aromatic lovers. I can't say for sure but it may well turn out to ghost a pipe because of its very strong flavoring.

Purchased From: Online from cigarsinternational.com

As a previous reviewer accurately described, this blend arrives quite moist in the tin and must be allowed time to dry. There is definitely a window where everything works out perfectly. I think I caught it a couple of times. But it’s a narrow window once the tobacco has dried a bit. If you miss the window the tobacco will lose all flavoring and the scent that was in the tin will remain there, or in your pouch. What’s left will certainly pack well and burn evenly to a fine ash, but the taste will be chemical in nature and nasty. I’m just not interested in pursuing this finicky blend. Can’t recommend.

EDIT: 2/5/20. I had to bump it up one star because I was reluctant to toss this blend as it was a gift. So I trained myself to find "the window". It's a bit broader than I originally thought, so I am enjoying the tobacco when I catch it on a good day. Simply don't leave too much of it in the pouch for too long. There is also something to be said about a tobacco that does have good burn characteristics. Somewhat recommended.

It's yummy! That is my first thought in smoking this aromatic. Such a really nice flavor. Very complex flavors go through my mouth as I smoke this blend. Really nice sweet taste that varies as you go through the bowl. I would strongly suggest you leave this open to air for several days to help dry out the blend a bit. You will get much more flavor this is the best of the three East India Trading Company aromatics by far. Burns pretty cool if you don't puff it up and smoke and room note are pleasant. Just an all round top notch aromatic.

I just opened my second tin of this tobacco. The first I purchased was very wet, the second not so much. I call this my dessert smoke. The flavor is very good and it has no bite. It's not my everyday smoke but nice in evening listening to some good music out on the patio. The flavors last from top to bottom. It lights easily and stays lit. It's a nice mild sweet smoke.

One word: Kahlua!!!! A lovely vanilla cavendish with rum kahlua poured over as a top note. Vanilla, coffee and rum, what's not to love. A brilliant dessert tobacco, moderately cased with a heavy top note that stays with the blend even after opening. The aroma of this Nancy is just as delicious as the flavor, if that is even possible. A true aromatic for those with a sweet tooth. Cheers.

I am going to get a big sign and a T-shirt that says "IF YOU DON'T LIKE AROMATICS DONT REVIEW THEM" (at the next womens march on DC). This stuff is THE BOMB (if you like a super sweet vanilla-realm aromatic...which I do). This is actually one of my favorites. I still don't know why internet pipe smokers think it's cool to not like aromatics.. but it's all good... IF you like aromatics.. and want a sweet vanilla creamy-ish taste. This will not do you wrong at all.

Similar Blends: Bat with a Hat.

Well I guess I'm the lone dissenter on this tobacco. Yes it is moist but I have no problems lighting it. I find it smooth and delicious and detect no chemical taste whatsoever. In fact this is one of the best tobaccos I've smoked in 40 years. I just ordered another tin. Y'all are welcome to send me yours.

Deliciously vile gloppy stuff... Captain black meets boozy eggnog. The kind of thing you hate to love, like bananas fosters or pancakes. I smoke it when I want to feel vesalgic and decadent.

Age When Smoked: Soppingly so

I already had smoked EITC Cellar Reserve and found it to be both good and good in micro blending. The two blends are somewhat similar but have their differences. Both were very wet upon opening, though, OC was slightly less than CR and dried out a little quicker. Both have a reddish brown and black appearance but, then, begin to diverge. OC has less black leaf and increased reddish brown leaf; that is to say, less black Cavendish and more red Virginia. As a result, OC smoked less soft than CR and is a stouter blend - quite stout for an aromatic. OC smokes with a higher register than CR and is somewhat spicier. When freshly opened you get the spice aroma strongly, but it was the first thing to fade in the air out. One could also detect a citrus-like aroma and this did not fade significantly in airing out. So, you are left with the rum/vanilla aroma plus the citrus. I found this combo of aromas to be just OK in smoking straight out of the tin and the citrus does not work as well for me in micro blending. Still, all in all, not a bad smoke and I recommend it to you for a somewhat unusual smoking experience - three stars.

great smoke, a little wet opening tin, let it dry a little. the aroma , taste are both great,. will buy this one again for sure. aromatic smokers rejoice