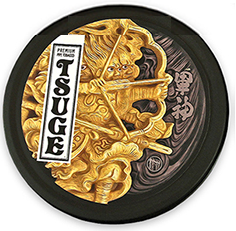 Gunjin (the Samurai god) combines superlative quality, bright Virginias with the exotic flavor of select Orientals and a dash of smooth black cavendish. A mild-to-medium smoke, this blend is mellow and lightly sweet.

Picked this up in a trade. Light, sand colored tobacco with a few small flecks of black. A sort of light hay aroma in the tin - my nose couldn't pick out any orientals or perique. Ribbon cut.

In the pipe the lemon Virginias were sweet hay - too sweet. Quite the turnoff. But it didn't seem as though the Virginias were to blame, so I'm guessing it was the Cavendish. I couldn't place the Cavendish flavoring but it caused the whole blend to go "Mac Baren roll cake" on me, with an artificial pastry-like sweetness or the "sugar with no backbone" as I've come to call it. The perique was very light and mildly peppery and the orientals were sour and on the nutty side, which was excellent. In fact, the whole thing would have worked if not for that nagging fake sweetness, as I really enjoyed the interplay between the Virginias and the orientals. In subsequent bowls I attempted to remove the Cavendish and that helped a bit but not enough. The last 1/3 or so of the bowl and the sweetness burned off, showing the strengths of this blend. Easily 3 stars without the cav and about 1.5 with it, so two stars for this one. For my tastes, this blend didn't work and I would love to try it before the Cavendish is added.

Gunjin in the tin is a mixture of mainly bright leaf with a few specs of Cavendish and Perique. The tin note and the appearance of the leaf look and smell inviting. I think many will find the moisture content “smoke ready” although I prefer a little dry time. The tobacco appears to be of high quality and in the pipe it shows. The Virginia’s offer some sweetness, and a little bit of hay, but most of the sweetness for me comes from the small amount of Cavendish. The Perique is a player and noticeable but not heavily added. It offers more in the way of pepper. It burns cool, but can get a little warm if pushed. I believe that there is a very lightly added topping too. The issue that I have with this blend is that I quickly became bored with it. It just seems to be lacking something. As a Virginia smoke, it’s decent, but there are better choices. The rest of the tin is going in a jar to cellar as I expect it will do well there. This isn’t a three star blend for me, but it’s closer to three than two, so three it is.

This tobacco is a bright yellow mixture with a few light brown and black leaves mixed in. I was able to get a sample from a friend who was able to get his hands on this one and another of the Tsuge God blends. Again this tobacco seems 'Organic' to me like Raijin. I use this word because the tobacco leaves seem like they were just picked last week and put into a blend. No processing detected in anyway shape or form. I'm sure this is the case with many other blends, but this one, to my eyes and hands and nose, just seem completely fresh.

Loads and lights well, and remains lit with no issues. A wonderful VaPer blend. I get the hay tones with the sweet virginia and bit of spice from the perique. The spiciness is not overpowering and you can feel it, from time to time, on the back of your throat. I noticed some floral notes at the 1/2 half of the bowl, almost like just a hint of rose mixed with some leather and earth notes. There was another spice that I can't seem to name that appeared during the 2nd half of the bowl, but it was quite a nice surprise. A complex, yet well rounded VaPer. Not too sweet, not too spicy....just right!

The God of the Samurai indeed!!!

The grassy, hay-like, very citrusy, light acidic bright Virginias are the lead component, and also offer a touch of honey and toast. The floral, spicy, woody, earthy, dry, and moderately sour Orientals are a supporting player. The raisin, plum and spice aspects of the perique are fairly sublimated by the Orientals. The sugary back cavendish is less than a condiment. There’s a touch of a sweet topping that does little for the taste. The strength is almost medium, while the taste does reach the medium threshold. The nic-hit is a step or two past the center of mild to medium. Won’t bite, but super fast puffing may result in a minor harsh note. Has a rough edge at times. Burns clean, and a tad warm at a reasonable pace with a mostly consistent, mildly sweet and savory flavor from top to bottom. Leaves little dampness in the bowl, and requires an average number of relights. Has a lightly lingering after taste and room note. Not quite an all day smoke. Two and a half stars.

Pretty good looking stuff in the tin, a palette of colors spanning yellows, golds, tans and greens. Definitely orientals present, that is, and you can smell them. I don't often go for Turkish or orientals because they generally come off too cigarettish. But this is quality leaf, much of which is in bigger, less processed pieces, so I'm game.

The tastes are a little subdued in my opinion...maybe too fresh? We'll see over time. Could be personal taste receptor challenges as I'm fresh out of brain surgery a few days now. I get the spices and the floral notes, just what I want when I do choose an oriental blend. Overall, I wouldn't rate it the best of the god series at this point but I believe this one could evolve. It's interesting enough to see how much more interesting it may become. Good quality leaf, zero burn issues.

Another sample from the Chicagoland Pipe Show. Amazingly sweet and consistent blend. Not much development of individual favors. But a great consistent flavor all the way through.

I enjoyed this one as a nice change of pace smoke. I purchased one tin of each of this series which was released shortly after the seasonal themed series. Whereas the seasonal themed blends were more aromatic, the god series seemed to be more aimed at the English/Balkan side of things.

One thing both series have in common is some kick ass artwork. If there were any tins that you would have a hard time discarding, it would be these tins. While I have tried all but one of the seasonal themed blends with favorable results, this was the first of the gods series that I have had the opportunity to try and it did not disappoint either.

I believe these are all made by Drew Estate and I have been impressed by these as well as DE's branded aros. They seem to do good work with tobacco. This one is hard to classify into any particular genre and thus fit that oddball designation in my rotation. If pressed to pigeon hole it into any one it would be with the VaPers as, to me, this blend is mostly highlighted with a sweet hay Virginia that seems to be assisted by some form of topping or perhaps the Cavendish is topped.

Although Perique is listed among the ingredients, it is lightly applied and doesn't factor prominently in the taste. The oriental is a bit more pronounced and a nice touch of sour. This one does offer some complexity and is quite enjoyable. I had thought of giving this four stars, but I am not craving it even though I have smoked my last bowl of it. This tells me that it is more appropriately a three star blend.

The virginias and cavendish provide a sweet and mellow base. The orientals provide a slight tang while the perique is present without being overpowering and leaves space for the other elements of the blend. I found this blend a nice one to have early in the morning, especially in the warmer months.

(Ob. disclaimer - novice piper here) A blend this baka gaijin can get behind.

Bright in the tin, and not too moist. Not the top layer, anyway. Smells of leather and orange zest. Tastes like a good Virginia, with a spicy compliment. Burned to ash with minimal relights, a very tasty and consistent smoke.

Similar Blends: 965, minus the latakia.

This would be a far better smoke if I never found the same problem as I did with their Fujin about a week ago: no seal on the tin. So, I was disappointed when I got no hiss as I popped off the lid!

The blend's mostly a mixture of medium brown and yellow tobaccos, and just a few specks of black. There's some fairly coarse pieces, and it's too dry.

The flavour's quite nice, mostly Virginia and Orientals, and some Cavendish sweetness. I don't believe the tin description, I can't taste a speck of Perique in it! So, it doesn't sound that bad so far? Well, it burns hot, fast, and bites me.

Gunjin: like it's sibling, Fujin, the lack of seal ruins it. Not recommended: