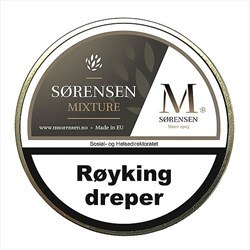 Black cavendish, light Virginias, and spiced burley is used in this mixture. The sight of this mixture contrast filled pipe tobacco sharpens the senses to the experienced smoker, and is only superseded by the flavor of vanilla and honey. A mild, but very aromatic mixture with guaranteed a balanced burn rate. The aroma is wonderful and quite pleasant.

When I was in Bergen, Norway, I picked up a tin of this at Sørensen. It was a little bit of a souvenir, but then I was not coming far. It seems like this can only be bought in Norway, unless they can ship internationally. At least that doesn't concern me much, since I live in Norway. I am ordering another tin soon.

So far in my pipe smoking career, which spans 7 months as of this writing, the aromatics that I would usually get would be similar in characteristic. I think that I need to perfect my technique with them, but they usually taste great at the start and then, halfway through the bowl, I feel like I am just smoking ash. This is sort of not the case with Sørensen Mixture. Every bowl I remembered and the one I had recently consistently delivered for me. At the very least, that says a lot.

The taste, which is described as a vanilla and honey, also has a slight chocolately taste. This is probably the power of suggestion, since that's what they said at the store in Bergen. It's not overpowering in both the tin note or the smoke. I think the moisture level was fine out of the tin, but I did leave it out (at the time, unaware of the finer aspects of moisture levels in tobacco, but I will update this when I crack open another tin.)

If you live in Norway or are visiting and enjoy a good aromatic try to get a tin of this. Just be aware that 50 grams of tobacco ranges roughly from 300-400 NOK, which is $30-$40 USD with the current exchange rates. I seen this priced on the lower end of the range.

New pipe, new tobacco. At first, I had some challenges to pack the pipe properly. Because if you pack too easily, it will bite.

Quiet and calm I fired this delicious tobacco. It has a lovely aroma of honey and vanilla with light Virginia. It's mild and nice.

I really recommend this one. The challenges with this tobacco is that it smells and tastes so good that you would like to smoke more. Remember to pack well and spend time.

M.Sørensen Mixture is Perhaps the most known of the tobbaccos they sell in Their store in Bergen. It can be found on their website as well. The flavour is not overpowering, But rather compliments the tobbacco. This has been my go to blend as I live relatively close to the store.

I smoked this as new, however I have cellared a few tins and will Get back with a review of the aged tobbacco

After my father was introduced to pipe smoking, he bought a tin for me to taste during his visit to Oslo. Not being particularly fond of aromatics, given my previous experiences, I was somewhat sceptical, but also eager to try a “Norwegian” blend.

It has a velvety smoke, with taste of cream and caramel atop mellow tobacco flavours, delivered on a medium body. The tin aroma is much the same, but slightly sweeter due to the vanilla casing.

It smokes like an aromatic, though, and will need a relight before settling, and the pipe might need a proper cleaning post-smoke. (Which means I will dedicate a pipe solely for aromatics from now on, in case I stumble upon another I deem smoke-worthy).

What strikes me with this particular blend, is the way the added flavour play with the natural tobacco flavours to accentuate the creamy nuttiness of the burley and sweetness of the Virginia, instead of undermining them in an unnatural casing (I’m looking at you, Solani Blue and Rattray Wallace).

All in all, it is what it is, but very pleasant (especially the room note), despite it being overly expensive due to Norwegian taxation.