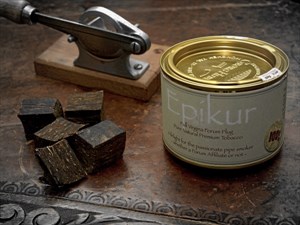 This is a private brand release of Samuel Gawith's Full Virginia Plug (the later not being sold in Germany), which again is the plug version of the Full Virginia Flake.

It's a solid block of mottled brown tobacco smelling sweetly of freshly cut grass or hay in the tin.

It takes a very sharp knife and some craftmanship to prepare this tobacco for smoking, but it's worth the efford. I usually cut a slice of 2-3 mm from the plug, which I then cross cut into cubes of the same edge length. After that filling and lighting your pipe is quite easy: just let the cubes trickle into your bowl and tamp gently. After the charring light I level out the ashes and get the tobacco burning evenly with usually a single true light.

Like any Virginia blend, this one needs to be smoked deliberately gently and coolly, too, in order to develop its full flavor, which is somehow more pronounced than in the flake. If it burns too hot, it'll loose its complex aroma and might even get sharp. The full bodied, tangy taste has a distinct natural sweetness that reminds me of dark chocolate. The tobacco burns down evenly and slowly leaving some powdery, dark grey ash.

The room note is unobtrusive, but has a slight sweetness as well.

This moderately dense plug has quite a bit of moisture and however you prepare it, I suggest a little dry time. This straight Virginia plug offers mildly fermented, rather tangy dark fruit along with some tart and tangy citrus, a lot of earth and wood, bread, some vegetative grass, light sugar and floralness, along with a bare hint of spice. Unlike FVF, there’s a small amount of fermented, stewed dark fruity, earthy, woody, sugary, bready stoved Virginia. The spice content of Full Virginia Flake is a tad more obvious, and is a little sweeter as well as being a tad less earthier. That's not uncommon of plugs. The strength falls just short of medium, while the taste level barely touches medium. The nic-hit is a step or two past the center of mild to medium. Won’t bite or get harsh, and has a few very light rough edges. Burns cool, clean and fairly slow with a very consistent flavor all the way to the finish line. Leaves little moisture in the bowl, and requires some relights. Has a pleasant, lightly lingering sweet after taste, and room note. An all day smoke that strikes me as a more refined FVF in plug form.

This plug smells of malt, bread and hay. I can smell dark chocolate and a sweetness as well. This sweetness is even visible on the plug because there are small sugar crystals on the surface. The plug is very moist, but I couldn’t wait to smoke it so I cut some cubes and lit the pipe directly without drying the tobacco. The cubes where so moist that it took a while to light them up and a lot of relights were needed. The taste wasn’t that sweet as expected from the smell and from the sugar crystals, but nevertheless it was a bit sweet. The main flavors for me are malt and earth. From time to time the taste reminds me of bread. There are tangy dark fruits and a slightly grassy note too. In a few puffs I can taste a bit dark chocolate.

The next few pipes I’ve smoked with this tobacco I experimented with cutting styles and drying time. It was easier to light the tobacco and keep it lit the more it dried, but in my opinion some of the flavors got lost. The best solution I’ve found yet is cutting very thin flakes which fall apart while cutting and stuff them directly in the pipe without drying time. I still need more relights than regular but I found the full flavor profile from the first time smoking this tobacco.