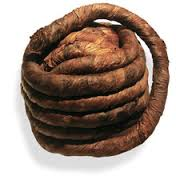 If this is the same stuff Mr. Robinson at the wonderful English Pipe Shop in Chicago gave me in 1957--and from the review I just read, it certainly sounds like it--it is a tobacco most people will only try once. "Wait until you get home to smoke this," Mr. Robinson said. It was good advice. In addition to liquorice and plum, I think my sample also contained LSD. I had asked for something strong. "This will knock you on your ass," Mr. Robinson said. I assumed it was a figure of speech. It wasn't.

Age When Smoked: I would guess prehistoric

When I took my twist from the pouch the first thing I noticed was the girth. It's towards the thicker end of the scale so a good knife is a requisite and also, alas, due to the thickness it's kept a good amount of water inside so it needs drying before being smoked. The aroma from the unlit twist is very strong and the collaboration of plum and liquorice makes for a smell that's identical to cough syrup! Once the coins have been sliced they are easy to rub to a good consistency and then it's time to fill and light!

The first puff is exactly what I expected from the aroma, I never realized that cough syrup was the latest tobacco casing! Jokes aside though it's without doubt one of the strongest/falsest tobaccos I have tried. Strong in both flavour and nicotine, flavour only people stay away! The room note is really false with a strange chemical quality to it, urgh! Some good points are the burn, temperature and bite. It burns steadily leaving a white ash, the smoke isn't anywhere near being warm and I don't get any tongue bite whatsoever.

Sadly though, these few good points are nowhere near enough to raise it from the depths of one lonely star. Not recommended!

Similar Blends: NOTHING is as nefarious!.

Available from my preferred baccy emporium only in small, pre-sealed packages of about 7 grams, these sweet flavoured twists are likely conceived as chewing tobaccos by GH&Co. That didn’t stop me from ordering up a selection to sample in my pipe and it shouldn’t stop you either, provided you have a stomach for strong tobaccos with strong top dressings.

I smoke a lot of Brown Irish, more than any other tobacco. I have to say that the ‘aromatic’ version that is sold in pipe sized quantities didn’t really agree with me (it’s rare I say that about a GH&Co blend) but this one is more to my tastes.

I think I can understand what my fellow reviewer perceives as an unnatural element to the top dressing but I don’t interpret it that way. To me, that element is the liquorice part of the dressing which is tasted mainly in the mouth, and is quite pleasant provided one sticks to the kind of gentle sipping that weed of this strength demands from many smokers. The plum element of the flavour is much more aromatic and comes through in the side stream. YMMV.

I like it. Probably a 3.5 star blend rather than the full four stars, but definitely worth investigating those for those seeking an aromatic take on the brown ropes.