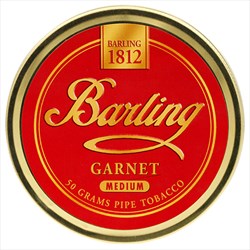 The smoky, musty, woody, earthy, wine-like Syrian latakia is an important player as is the mildly spicy and floral (almost clove-like), very woody, earthy, moderately creamy sweet Java leaf occasionally taking a light lead. The nutty, earthy molasses sweet burley is a secondary varietal. The grassy, citrusy, dark fruity, earthy Virginias form the base of the blend, and is constantly noticeable. The very spicy, raisiny, plummy, figgy perique plays just above the role of the Virginias. The strength is almost medium, while the taste level just touches that mark. The nic-hit is just past the center of mild to medium. Won’t bite, but the spice content may be tongue tingly to a fast puffer. Burns cool and clean at a reasonable pace with a mostly consistent, fairly well balanced flavor from top to bottom. Leaves little moisture the bowl, and requires an average number of relights. Has a pleasantly mildly lingering sweet campfire taste. Can be an all day smoke. Two and a half stars.

Typical mottled latakia blend in ribbon cut. Tin nose was of old dirt with a combo of fruity and cigar leaf. I'm not really familiar with "Java" leaf but I'm told it's either cigar leaf or "tambolaka-like" in nature.

This is a case where there were too many ingredients in the stew. Different flavors popped up at different times. If ever there was a tobacco that was too balanced, this is it. Nothing asserted itself much and instead it was just sort of mushy with no real overall flavor or character. Occasionally the Java leaf jumped to the fore but it would recede just as quickly in the base. The Syrian latakia was usually difficult to assess. Again, I think there were just too many components here. The perique and the java may very well have come close to cancelling each other out, but the burley and Virginias didn't pick up the slack. In looking for the word that best describes my smoking experience with this one, that word is "bored". Not enough going on here for me... or is it too much?

The first thing that I noticed after opening my tin of Garnet, was the topping. Fortunately, it really doesn't appear in the smoking experience. In the pipe Garnet, to my taste, the problem with Garnet is that it is unbalanced. I enjoy Java (cigar leaf) in many different blends, but here it adds a “dryness” (not to be confused with dry burning) to the smoke that tends to dominate the other component tobaccos. It burns cool and offers no bite. It could be the newness of the tin, but for me, Garnet falls pretty far down the list of cigar blends that I enjoy. I’ll finish the tin, but doubt I will add anymore to the cellar.

A medium, nicely hydrated, ribbon which appears to be quite fair with the inclusion of each variety of leaf. The tin-note is quite fruity, typical of Perique.

The VaPer side and smoky Lat could make for a tasty smoke. Could, if it weren't for the Java. It tastes bitter, dry, and harsh, and there's too much of it. This leaves no room for any Burley to get recognition, making it the archetypal 'bad' cigar leaf blend, for me. There are a few good points, namely the burn, temperature, and tongue bite: none. But they aren't enough to redeem it.

I don't like it, and wouldn't smoke it again. Not recommended:

I'm keeping this one short, after a promising tin-nose which has a topping similar to many JF Germain blends it's downhill from there. Packs well and combusts well, but the flavours are non-descript, over blended in my view.

Not recommended, the Blue labelled Tradition is more rewarding on all levels, at least for me.

I found this blend to be just alright. It has everything but the kitchen sink in it, so it can’t help avoid providing shifting flavors and moments of great flavor. The problem is these moments were mostly fleeting.

The description starts By mentioning the Syrian Latakia which led me to believe it would have a bigger role, but it was more of a whisper that was often clouded by the other elements. I am pretty sure there is a topping to this as well. It is fruity as many have alluded, but, IMO, it is not the fruity flavor that would come from tobacco. Some attribute it to the perique. While perique does taste a little fruity when smoked, it tends to smell like compost before it is smoked.

If the fruitiness, that is clearly identifiable from the tin note, is coming from any tobacco it would be the VIrginias which do provide ample sweetness. Those that do acknowledge the potential of a topping mostly say that it goes away once under flame. I did not get this myself. I tasted it pretty much through half the bowl and then it pretty much lifted.

This blend does not lack for body, thanks to the Java leaf, burley and perique. These elements also ensure a pretty good nic hit, but I would not really call it overly strong in terms of nic.

For me it falls between two and three stars and would easily be a solid three if the topping were lighter. In any case, I will up it to three because it is unique and overall, I enjoyed my time with it.

Ok, first smel from tin is definitely perique. Fruity smell with freshness. But no presence of latakia. It was kind of disappointment. If you take closer look you will see that this Syrian latakia - from famous "no enough smoked" stock. So do not expect too much. But when you smoke it - you can feel that taste of "black mistress". So I can not say it is bad blend, it is unique and has some character, but what to do - not the best. Still, I enjoyed it.