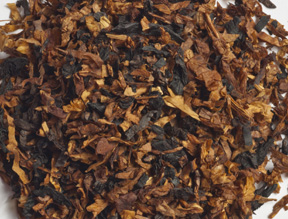 Blended of high grade Virginia and Burley tobaccos from Africa. To assure extra mildness a light Cavendish has been added to the loose cut. Vanilla and chocolate flavours are in front in this unique blend, with both adding to the taste and the smoking characteristics.

The Virginia is grassy with citrus, which are common traits for many of this company’s blends. The earthy, woody burley has some nuttiness, though both tobaccos are sublimated by the toppings. The chocolate and vanilla aren’t deep, but they are a little more obvious than the nougat, and even more so than the hint of caramel. Has a very mild nic-hit. The strength and taste levels are mild. Won’t bite or get harsh. Burns at a reasonable pace, clean, and moderately cool with a fairly consistent flavor. Requires few relights. Leaves a minor dampness in the bowl. A fairly innocuous all day smoke that reminds me very much of the Stokkebye version, right down to the number 24. Two and a half stars.

Some of the blend is quite coarse, and there's also one or two twigs in the pouch. I can't fault the moisture, and the smell's nice: sweet, but not too pungent.

I think this would make a good dessert aromatic: it's pleasantly flavoured but falls below being too sticky, easily. The tobacco flavours aren't much to shout about, not that they taste bad, they just seem mundane. The temperature from No. 24 is nice and low, and the actual smoke is thick in build.

I like the room-note, albeit the place becomes quite clouded with smoke, and the nicotine's mild.

Not bad, not great, but a bit higher than being a two star blend.

Ok, I can get down with some sweet candy filling. Since, I'm not entirely sure what nougat is, I will say this stuff certainly smells like a chocolate covered candy bar (Milky Way/3 Musketeers) with nougat inside. A very inviting presentation with nothing overly sprayed or artificially heavy handed.

The slightly sticky mix had long, tan, ribbon strands and a few waded dark brown balls, that packed densely and stayed lit. The smoke however, wasn't nearly as exciting, being rather bland and losing much of the candy flavor in translation. It was light, not offensive, smokable, but left me flat as I demand taste bud tingles with an Aromatic.

In deference to those Burley fans who want just a hint of chocolate omph, I won't rate this below a 2, but I have to reason to smoke another candy bar here.