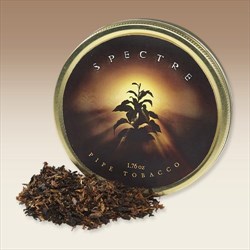 Spectre is a pipe tobacco adaptation of the successful Spectre cigars, which were the first widely available cigars containing latakia. It's a rich blend of Virginias, Orientals and latakia spiced with a mixture of cigar leaf from around the world.

Notes: Although created by Russ Ouellette, this is not a Hearth & Home blend but a standalone product connected to Spectre cigars and AJ Fernandez Cigars.

The Virginias are grassy sweet, with a hint of earth, and play second fiddle to the smoky, lightly earthy sweet cigar leaves. The minor players are very important in this blend, adding a sweet and savory complexity. One of them is the Orientals, which are woody and smoky with a few dry sour and spice notes. The Cyprian latakia is a moderate addition, but it’s smoky, woody sweetness elevates the campfire-like flavors, and like the Oriental/Turkish, is obvious in every puff. Even though this is based on Spectre cigars, and the cigar taste is almost the predominate star, it does very well as a richly tasting pipe tobacco. Burns reasonably cool and very clean at a moderate rate with hardly a relight, no weak spots and leaves little dampness in the bowl. It has a nice nic-hit, too - almost medium. You may experience a mild harshness if you puff too fast; this needs to be sipped for best effect. Has a decent after taste. Not an all day smoke.

As a former, avid cigar smoker, I am always interested in trying new cigar leaf blends. They tend to have a fairly wide spectrum of flavor in the pipe world and Spectre definitely falls into its own niche with a unique flavor. The tin note is very smokey. The ribbons are cut very thin and the moisture level is going to be perfect for most pipe smokers. Spectre is somewhat sweet and I do think that there is a small amount of manually added sweetener, likely added in processing, that goes beyond what would be offered from the cigar leaf and Virginias. Even though the tin note is quite smokey, when it’s smoked, the Latakia is only playing a supporting role. There is a musty flavor to this blend too that I find inviting. For me the musty flavor is more prominent when smoked in a Morta pipe rather than when smoked in one of my briars. The cut makes for great burning characteristics as I seldom needed to relight it. My wife, a pipe smoker too, hates the smell of cigars and she found the room note to be pleasant. It initially smokes on the mild side with a decent amount of complexity and a lot of flavor. Spectre builds in strength as each bowl progresses. As pointed out by another reviewer, the negative is that there is some harshness near the bottom half of the bowl and it’s wise not to push it. Some of this harshness might be mitigated with aging. Spectre won’t be my first choice in cigar blends, but it’s enjoyable enough to add a couple of tins to the cellar to see what difference a year or two may make. Recommended.

When the Spectre cigars were released last year, I was an instant fan. Upon hearing that a matching pipe tobacco had been made, there was no hesitation grabbing a few tins ... especially since Russ Ouellette was involved.

The cut is a somewhat shaggy ribbon that packs easily. Also, the moisture level was perfect to smoke it straight from the tin. I usually have to dry my tobacco to this state.

At first light, the Orientals are out in front with lemon-butter and spice but are quickly supported by a rich, bready Virginia. The Latakia is present in condiment form, just as in the cigar. The cigar leaf adds some chewy mouth feel and creaminess to the smoke.

Around half-way through the smoke, the components really have melded together. The musty / earthy side of the Orientals comes out a bit more as does the Virginia. This is a pretty complex blend.

Finishing up the bowl, things got a bit harsh but not too bad. I was probably pushing too hard at that point. This blend really likes to be "sipped" from start to finish.

Overall, this is a nice addition to the cigar leaf blends. It's complex and prefers a nice big bowl. I'm happy to have added it to the cellar.

Having enjoyed several boxes of Spectre cigars it was a given that I had to try this blend. There is only a passing resemblance to the cigar here which is to be expected. I find this to be just a bit disjointed, like the components just don't quite gel. I suspect it's the cigar leaf. Seems it doesn't want to play well with others. I think that's also the source of the harshness detected in the second half of the bowl. The first half, in spite of the disjointed feel, is not too bad. Altogether I can only half-heartedly recommend this one.

Medium in body. Medium to full in flavor. Ready to smoke out of the tin. Burns nicely.

I must admit to not having tried too many blends with cigar leaf in the mix. You have to not puff away too quickly or it will taste like your smoking the contents of an old ashtray. With that being said, this blend is really very tasty with the right cadence. The moisture level is spot on, even if you just pop open the lid. The nicotine level is a bit on the higher end of the scale. It lights easily and stays lit with little effort. It also produces a nice amount of smoke, perhaps due to the cigar leaf??? All in all, very recommended.

I know at the first puff what will attract me to it. I get the dry, almost sweet orientals and the latakia playing off each other in a way that almost reminds me of the incense used during the Mass (which is Frankincense). That's my first puff, then the mild cigar and VA (more grassy than sweet) seem to come into the mix rounding out the taste across several octaves. With slow puffing, down the bowl you'll be rewarded with a rich mix that is very consistent. No casing or added flavors. A blend I will smoke only when I have the time to pay attention to it.

Age When Smoked: Tin was one year old when smoked.

I was skeptical about this blend when I purchased it on a whim. I like cigar leaf blends, but this one blew me away; it's so relaxing to smoke, the room note is marvelous but not overpowering, and you can just puff contentedly to the bottom of the bowl.

I would recommend this to anyone and I will most certainly buy more of it.

Sorry to find this one has been discontinued as I have enjoyed many bowls of it with a friend who purchased a tin from P&C last year. This blend leans toward the enjoyment of a bold cigar flavor. The only drawback I have experienced is that it tends to build a decent amount of moisture in my briars while smoking it because it's a hard one to sip at for me. I burn it faster than I should, like a steam engine. If you're a cigar lover who is trying pipe tobaccos, I would recommend blends such as this one containing cigar leaf.

Nice aroma in the tin. good moisture content ready to go from the tin. Packed using the Frank method and stayed lit without relights. I found this tobacco quite strong and tending towards harsh - very unusual for a blend by Russ who generally hits a home run with his blends. This was also surprising as I tend to enjoy most of the A J Fernandez cigars I have smoked. None-the-less this blend caused me to experience coughing jags (and I do not inhale) to the point where I found the experience unpleasant and decided I had to make some further home blending if I was to smoke this any further. I tried adding some Sail Cavendish (from the yellow pouch) which only rescued this for me after I had mixed 1/2 Spectre and 1/2 Cavendish. At this ratio I no longer have coughing fits and although I can still taste the cigar component I can only give this blend a "slightly recommended" rating. An easier move to a blend with cigar leaf tobacco for your pipe would be Savenelli 1876 Special Tobaccos which does not have the tendency to harshness, does not induce coughing and still provides a nice cigar flavor in the background.

Dare I say "nightcappish"? Darn good stuff. Very much like Nightcap/Habana Daydream blend to me with a little less vitamin N. An oriental component peaks out just a shade more caressed by the virginias. Cigar leaf and latakia are absolutely perfectly entertwined to make this a legitimate pipe forward, long smoking, smoky smoke. Love it.

I don't have that much experience with Cigar Leaf blends so I don't quite know what to look out for - thus, I was unsure what taste to expect from it in Spectre pipe tobacco. I have not smoked Spectre cigars so I don't have much to go on by way of comparison either.

What comes to the fore during the smoke is Latakia, though not in an overpowering way. Does the Cigar Leaf (CL) contribute to mellow down the Latakia to balance it? Dunno! If so, it does not succeed completely. Or does it serve to enhance it? I guess that's a question only those experienced with CL can answer.

On the whole, the tobacco is full and flavourful, with a certain sweet earthiness; and a pleasure to hold in the mouth in a swirl.