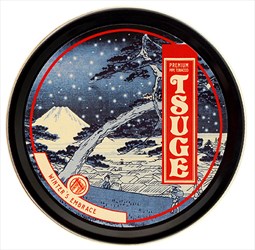 Notes: "The Four Seasons" is a line of aromatic blends that are meant to capture the essence of the four distinct seasons in Japan. They were announced at 2014 IPCPR, and released in late 2014.

The tin art alone on this tobacco is worth its weight in tobacco; however, what a wonderfully complex straight virginia this is. Bright tan and dark brown colored ribbon cut virginia tobacco announced itself with a fresh scent of deep raisin upon... initial whiff. The texture of this tobacco was that of a dry sponge, having a nice bounce with enough moisture content to smoke right away, at least in my humble opinion. Winter's Embrace was packed nicely into the black and gold 50g tin and I found myself almost unpacking it from the tin in scrapes along the top after removing a plastic covering from beneath the paper liason between the tobacco and the tin. The charring light was as it should be, short and productive and the continuing smoke I enjoyed through my Straight Billiard Vauen Sword released a variety of complex, deep natural flavors that never bit and stayed appealing until I was finished smoking. Although nothing mindblowing or deeply sensational, Winter's Embrace is truly a superb smoking and tasting tobacco that I would not only recommend but will surely purchase in the future.

This one just did nothing to thrill me from the very start, although at the start the topping was much more apparent than it was a little more than a year after I popped the tin. The topping definitely lessened over this time, but the tobacco never got crunchy, so it never made it into a jar.

What was left behind from the topping was a very light Virginia, and although the toppings list burley, it is not a dominant player. While it is not so light as to have a cardboard type taste, there is very little tobacco flavor at all. This one ends up suffering from that hot air curse that plagues so many aromatics after the topping starts to flash.

The blend is very much like a European aromatic in that it is Virginia dominant. I would say it is a little like Davidoff's Danish Mixture just not nearly as good. DDM has much more topping than WE, but the problem with a blend like WE is that a light topping does not really work when the underlying tobacco flavor is so weak.

To give it some props I will say that the tin art is beautiful and may be the reason I made the purpose. And sticking with the packaging, it has an odd plastic coaster atop the tobacco and folded under the coffee filter enclosure as opposed to the heavier paper stock that is typically used. At first I thought this was pretty cool, but it tends to draw a lot of tobacco to it everytime you pull it out to pack a bowl. It is novel, but I prefer the paper.

In the aggregate, If this is smoked quickly one will enjoy it much more than I did after it sat awhile in the tin, I do remember much more presence from the topping in the beginning. Kind of fruity and honey sweet and it wasn't bad. So I am leaving this at two stars, but will always opt for a tin of Danish mixture or even Peterson Gold blend before I would pick up another tin of this.

As far as the tobacco goes...it was less than stellar. Very light in color and just as light in flavor. The grassiness of the Virginias was prevalent, but the casing was under-utilized. Not what I was expecting. On the other hand, the tin art is amazing.

This is a very mild no frills pipe tobacco that burns quicker than most. It has been described as an aromatic, and if one looks at the blend closely it is a sentiment I concur with. However unlike most aromatics this blend does not burn hot at all. In fact while it burns pretty quick, my pipe was pretty cool to the touch despite smoking the whole bowl. The taste is not strong. Overall this tobacco blend isnt bad, but its not groundbreaking. Worth trying, but I wont be buying a second tin.

Not bad , a bit bland, but if you smoke it just right you get a nice hint of what it could be. If you like a mild tobacco that's just barely an aromatic you may like this one. I find its a good smoke for my morning commute. I wish the tobacco was as nice as the tin art.

I picked up some new to me tobaccos while back in the States. This is the first victim. I wasn't really impressed with this one at all. When I opened the tin for the first time, it was really dry and it didn't get any better afterwards. It reminds me of some of the C&D blends that are really on the dry side. I really didn't notice any flavoring or taste in this tin. Room note was pleasant enough, even got a compliment or 2 for it. Which is this blends only saving grace for me. YMMV. At best somewhat recommended.

A mixture of light and medium brown ribbons which despite the fact they're squeezed together in the tin are too dry. There's a mild citrus aroma from the tin.

At first the only topping I could identify was a mild vanilla addition, but after a short while I was able to pick out the citrus. This flavour, to me, is a contradistinction to the way a Winter aromatic should taste. Citrus is for the summer, vanilla, chocolate and rum are for the winter ;) The main tobacco flavour's the hay-like Virginia, there's a sweetness congruent with Cavendish, but I'm not to sure about the Burley mentioned in the description; if it's there it's being smothered by the Virginia, Cav', and toppings! It burns too quick and can be a bit warm.

Winter's Embrace? Not good. One star:

Well it is almost wintertime, so let the seasonal Tsuge review commence. I hadn't read up on the contents of this one, so I had zero expectations.

Opening the tin I was met with that Virginia "hay" oder, so I got my buds ready for some Orlik Golden Slice or Escudo Navy de Luxe, but what followed was old cigarette smoke. I was not a fan and was immediately dreading the chore of smoking the whole tin. Not only was the taste off, but the burn sucked to; everything was just dry and turned to ash too quickly.

Upon coming to make my review I discovered to my confusion this was an aromatic, so I went back for another bowl in search of a missing flavor. I really got nothing from it, whatever vanilla that was supposed to live here had clearly left town.

It was just an all over pass for me. I suppose in the coldest part of winter I would be happy for it's warmth, but that is about it.

I usually like lighter touches of casing/topping on aromatic blends. This one is too light. Way, way too light. In fact, you can barely detect anything at all in the tin note, even less in the taste while lit. I feel like it could have been a decent blend. The leaf quality seems high, and the packaging is superb. But it needs to go back to the kitchen...its undercooked. On the plus side, it burned well and didn't bite me. On the negative side, my wife did not approve of the room note...or lack thereof.

Smoked this for my first review, and I have to say the tin art was the best part of the purchase. It smokes fine for a day to day smoke, but not particularly tasty or impactful. I found it to be bland but sweet, but I haven't had the other tobaccos from this line before so I can't compare it beyond other virginia blends. If you want nice tin art, and an okay smoke, I would recommend you to try it. It won't wow you but its something to put in the pipe and puff away at while you relax. Not complex, not something to write home about. 2.5/5

I bought all of the Four Seasons tins when there was a buy-3-get-1-free sale. So far I've had summer and autumn and enjoyed them both. This one, however, is a different story. I may have just gotten a bad tin. Upon opening I usually await that first rush of the tin note, but here - nothing. Tobacco is very light in appearance and is very dry, which is why I think it might just be a defective tin. I had 5 bowls of it to give it a chance. It lights right up (since it's so dry) but all I get is a very light grassy taste. Only the faintest hint of a casing. I'm going to jar the rest with a rehydrating stone in it to see if that helps. If not, I'll move on to Spring and give this one a miss.