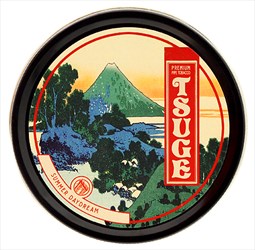 Summer Daydream combines sweet, flavorful Virginias with mellow, nutty burleys and is topped off with a mildly sweet vanilla flavoring to create a wonderful aroma and a very smooth smoke.

A thicket of summer grass is all that remains of the dreams of ancient warriors. Matsuo Basho (1644-1694).

Notes: "The Four Seasons" is a line of aromatic blends that are meant to capture the essence of the four distinct seasons in Japan. They were announced at 2014 IPCPR, and released in late 2014.

The Virginias are grassy, citrus and dried fruit sweet with a little earth and bread, and a bare hint of spice. The burleys are nutty sweet and has some earth, too, though it and the Virginias are sublimated a bit by the smooth and rich vanilla topping. I notice the burleys a little more than the Virginias. I get the essence of another minor sweet flavor, which could come from molasses in one of the burleys or perhaps a drop or two of something similar in the topping. Either way, the taste reminds me a little of something I’d buy in a bakery. Not much nicotine here. Burns at a cool, clean, even rate with few relights. Leaves little moisture in the bowl and will burn to ash. The taste is fairly consistent from beginning to end, though I notice the burleys a little more in the last quarter of the smoke. Has a very pleasant after taste and a sweet, baked goods room note. An all day smoke that doesn’t wear out its welcome.

I must admit to only purchasing this tobacco for its wonderful tin, but, much to my surprise the baccy inside was quite good, too. Generally I dislike aro's because of lack of taste, but this one delivered on that account—the vanilla comes through, but I could swear to a hint of maple syrup, especially on the snork. And, by the way, this was a fine snorker! Of course, being an aromatic (which this undoubtedly is) it has a tendency to burn a bit hot towards the end, and, as usual, along with this, a rather rank backwash developed, but, in this case, these rather nasty characteristics were short lived. The bowl burned relatively fast.

All in all, I really enjoyed this one. If I feel the need to fire up an aro, this will be one of them.

Aromatic? Hardly. On opening the tin I can only detect very light tofee aroma and probably a bit of freshly baked cookies. Cut as a medium wide broken ribbon the humidity is almost perfect, perhaps a bit on the heavy side, however it packs easily and lights on first try. The first puff is quite complex, but not overwhelming. It burns cool and stays lit without demands on technique. The flavor along the pipe is refreshing and sweet, producing a generous amount of smoke. As an aftertaste you can detect the rummy Cavendish but mainly tastes of extremely well cured Virginias and a measured Burley base that is reminiscent of classic American blends. I think I'm gonna buy this one again.

Similar Blends: An elegant mixture of Davidoff Danish Mixture with Half & Half..

I was gifted about four good sized bowls of this at our unofficial pipe club meeting the other day. With the name and the art work on the tin I at first thought it was a Japanese import but alas an American blend by Drew Estate. This has an unusual fruity smell to it; the web says vanilla but it must have some other secret ingredient besides that. The tin art is impressive and this is a rough-cut ribbon with lots of Black Cavendish in it. As another reviewer stated this is not your usual goopy aromatic. Nice clean burn with a nice ash at the bottom. Tastes good but even though I imagine wisps of vanilla I cannot make out the other flavors. Probably like how Dr. Pepper used to advertise it’s 23 unique flavors. You can’t pick out any one particular flavor or at least I can’t. The boss (missus) says the room note smells like a brownie. Worth trying, I suppose.

I did not like the topping on this blend. The Vanilla is obvious and is not the culprit as I enjoy Vanilla. There is much hinting at what some other flavors could be, but not many have pointed specifics out in their reviews. Jiminks does by guessing that molasses could also be an element. I think he is right that molasses is an element. I seems to notice that note on the snork. But I also enjoy molasses (quite a bit) so I still think there is something else.

While it is possible that the mixture of two flavors I enjoy (Vanilla and Molasses) could create a flavor I don't, I still think there may be something else. I am throwing in two possibilities, Chocolate and/or Black Licorice. I really can't stand chocolate toppings on tobacco. My earliest impressions of the topping reminded me of all the chocolate topped blends I despise, but if it is chocolate, it is lightly applied. Maybe Black licorice, which I really can't stand to eat, but have had a few tobaccos topped with it that I tend to enjoy. Black licorice can have a similar taste profile to molasses, so it may be this.

In any case, the reason I have spent so much time discussing the topping is that the tobacco can hardly be tasted at all. This is a true aromatic in that sense. While the topping may calm down as you work through a bowl, it never comes close to disappearing. If you don't like this topping, you will not like this blend. The opposite is also true. Overall, Drew Estates makes some high quality aromatics and this one is as well, but the topping for me, puts it at one star. The extra star is because the moments when I did taste the molasses and gave me the briefest pleasure.

I bought this when SmokingPipes.com had a Buy 3 get the 4th free special running so I bought all 4 seasons. I've only been back to pipes since the start of summer after a 35 year hiatus. Not really an aromatic fan. Not that I don't like the aroma, it's just that most smell great, but taste like burning tires. This tastes pretty much how it smells. I enjoyed the first bowl so much, after the pipe cooled off I packed up a second and enjoyed it just as much. Very mild all around - which is good, as my tastes lean towards the mild. I found the taste consistent from first puff to last. Easy to light with no relights required. In fact the second bowl was a one-light bowl. Other posts have covered the various flavors and I don't have much to add. If you're the type that likes a full-strength blend, you'll be disappointed. If you want something mellow to enjoy on the porch after a good meal - this one fills the bill. It's on my "buy again" list. Can't wait to try the other seasons.

I have to agree with all the other reviewers out there. Upon opening it had a great aroma of plums and chocolate. I was very hopeful. It wasn't overly cased at all and did not need any extra drying time. It packed really easy and the smoke was bountiful.

Opened a year old tin for the first time today. Smell on opening was awsome. Sweet vanilla, lite grass or hay even a wiff of like lemon grass. Packs perfect with 3 small pinches into a Stanwell. On first char tobacco expands and the flavor pushes out. Relight comes without a hitch. First few puffs and the smell is present. Vanilla is stronger than at first. The taste is very strong sugar. This follows all the way to the bottom of the bowl. Wonderful ash is lift with no dottle at all. Very good room note. This is a all day smoke. Tin was very well done and a year in the cellar improved it 100 %.

Tsuge: Summer Daydream 50g This Japanese "Made in USA" tobacco is a pleasant and fun smoke, not as tasty as the Rattay's Summer series, Tsuge's is a bit milder. I only bought one of the Tsuge tins and this one season, Summer, now I'd like to try the other season but they are out of stock.

I've until now shied from the Tsuge branded tobaccos due to the combination of the unknown and the higher premium price point. But, like others, I have been intrigued every time they feature in a catalog spread. The tin art is very attractive, so as a tin collector I obviously need all four seasons plus the god series. Anyway, I fortunately found them all on a clearance sale for less than 5 bucks a tin, and sprung like a leopard on a lame zebra.

The summer blend is my first experience, and it does not disappoint. I enjoy aromatics from time to time, but I much prefer the drier, less goopy aros. And that's what we have here. In drier aros you have a slight chance of getting some actual tobacco flavor in there. Still won't find a lot, but hey, that's what we have those thousands of non-aromatics for eh? This is a nicely done blend for what it is. Others have covered the tasting notes...i don't have anything to add. As always with an aromatic, either you'll be pleased by the sweet toppings or repulsed. So no guarantees. But know that the topping here is applied with a very light hand. Just how I like it. Smokes to dry ash with no bite or relights. I have to say I am much impressed and can't wait to see what the other seasons offer.

Two things attracted me to Tsuge, the stunning tin art and its connection to Drew Estate. This was the second of the seasonal blends I had a chance to try, and I must say I was far happier with this one, than I was with Spring.

The tin aroma is a mixture of vanilla and some musty almost cherry odor, it was a bit funky and topping heavy. It was cut nicely and packed well, albeit a bit damp from the topping, so you may want to dry it out a tad. It took a match nicely, stayed lit, and produced a lot of smoke. It was a breeze to smoke and very enjoyable to keep rolling.

It kept a nice warm slightly sweet flavor, though I'm not sure I could describe it as vanilla or otherwise. While it didn't pull me in a particular direction with distinction, it was the kind of aromatic that didn't let me down.

I keep seeing other Drew Estate blends disappearing, so you may one to give it a try before it fades into history.

This I found good and disappointing. It is a good aromatic tobacco, but I thought it would be an aromatic with a Japanese twist. In reality, it is just a good american style aromatic. It is really good, but I was expecting much more.

The thing is I really like this baccy. Not very aromatic to me. Just a touch. Absolutely no bite at all. Beautiful design on the tin. I am going to try the other season blends as well. It does cost a couple of dollars more but well worth it in my humble opinion. Give it a shot I say.

Similar Blends: Nothing else I can tell..