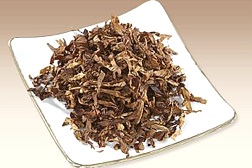 Notes: This is a match to House of Windsor's "Union Leader". A classic blend of burley and Virginia ribbon.

Now here we have a match I can sink my teeth into! I've smoked quite a bit of the original from the early 1990's version to the latest and I've enjoyed them all, although the earlier version was better. This looks and smells like the original HoW and it's nearly identical in taste as well. It's a rich tobacco taste with a mulled cider/honey character, not enough to be called an aromatic but more of a standard OTC codger burley. It's not quite as deep in flavor as the 1990's version but I still could probably only tell them apart in a blind test because of....

What made me laugh out loud in appreciation over this one was how close it was... right down to the light tongue sizzle. Sutliff did a fantastic job on this match. The tongue sizzle was there as it was with the original, but it was toned way down. HoW was known more for creating interesting OTC recipes and not so much for using the best base tobaccos, so I can't help but get the feeling Sutliff used more of a mid-grade burley in this one so as to match the flavor more closely. Just a guess. I loved the original and this one tastes like it. I didn't love the original's tongue sizzle and this has only about 20% of it. So I have to grade this one as better than the original. This one I'll smoke a lot of - highly recommended to lovers of the original. As with Sutliff's ERR'd match, smoke this one and forget time-consuming and costly Ebay searches for the originals. This stuff is dirt cheap! You can't go wrong.

The burley is lightly sweet, nutty, toasty and a little earthy, and is the main component. The Virginia is a little grassy with a touch of citrus. There’s a very mild spice note present, which I suppose comes from the burley. The topping seems to be honey, though it’s very lightly applied. Has a mild nic-hit. Burns clean at a moderate pace with a fairly consistent flavor. Needs few relights and leaves little dampness in the bowl. Has a pleasant after taste, and is an all day smoke. The House of Windsor version is the very same, though it would bite if pushed hard, and would get a little cigarettish at times once past the half way point. The Match can tingle just a little if puffed like a steam engine; then again, many burleys will. The HoW was less sweet than the Match, which isn’t overly so anyway. Produces a lot of smoke, and also sports a slight cigarette note in the same places the original does, but it’s much less noticeable in the Match.

Comparing the Match to the 1970s Lorillard version, there are a few differences. The 70s version is a little less sweeter, but a little spicier (which could be caused by age) and may be bitey if pushed beyond a reasonable smoking pace. The Virginia is a little duller, too, and it has the same cigarette notes as the HoW production. It tastes better than the HoW, but is less smooth, and has just a little less depth of flavor than the Match.

I gave three stars to the HoW version, and that was stretching it just a little. This is more of a three and a half star product.

I have smoked a pouch of the original US Tobacco Union Leader within the past year. I have never tried the HOW version. In terms of a match to what I smoked, this is a 4-star match. I am reasonably sure I would not be able to tell them apart.

This is a basic burley blend with a mild honey topping. The HOW description says that topping is maple, but that is not what my taste buds tell me. I can believe there is a little Virginia in there, but it does not contribute much to the taste as close as I can tell. Occasionally there is a little tart in the flavor profile.

This blend is slower burning than Carter Hall, and I never experienced any of the bitter at the end of the bowl that is often part of a burley blend. It is a pleasant smoke and I would pick up a pouch every now and then if it were available OTC.