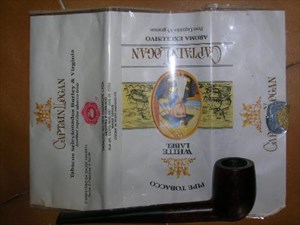 Pure Cavendish, made with Sun Cured Brazilian Virginia and Burley.

I never tried the original (Brown Pouch) from Induscondor, so this is a review for the Finamore version.

I remember puffing this during my first year in college. The pouch aroma is nice, with Vanilla and sugar notes. Easy to pack but not so easy to keep it lit, due to the moisture level.

This blend is harsh on the tongue and it burns hot I believe because of the Cavendish. The Burley here is present but in the back ground and is hard to even notice the VAs because the Cavendish takes the front seat all the road down to the bottom of the bowl.

This blend is no longer produced but don't think it will be missed by many.

This was originally from Induscondor, Petrópolis, RJ, Brazil. Further, their formula was bought by Finamore. It was a golden Cavendish mixture, produced from Brazilian Virginias and Burley. Traditional Cavendish. The original formula (brown pouch) was even better, Vanilla, sweat and sugar, caramel notes. i liked this blend a lot. At that time, the 80's, it was my second brazilian blend of choice, after the Brazilian's Clan. In the 70's and 80's it was easy to found in Brazil. Unfortunately, it is no more longer produced.

Pipe Used: many, brazilian ones

Purchased From: many tobacconists