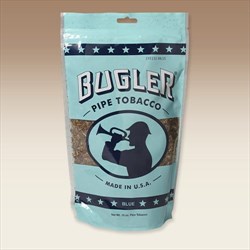 Look closely at the tobaccos in this blend and its quality is immediately apparent. Long strands of bright Virginias have been meticulously combined with bold, mahogany burleys. The result is a rich and satisfying smoke.

I opened a pouch of Bugler Blue pipe tobacco assuming it would be the same product as their RYO tobacco sold in gas stations all over America. In this regard I was mistaken, as the rough ribbon cut is very different than the shag-cut RYO. It's also lighter in color and a bit more dry than the RYO variety. The question, therefore, is not whether this is a pipe tobacco, but rather is this a good pipe tobacco. The answer, sadly, is no.

Bugler Blue burns hot and fast, much like its cigarette tobacco cousin. There are nutty burley flavors here, but only if smoked very slowly. There are also, however, some chemical flavors I associate with mass-market cigarette tobacco. Certainly not the worst of that sorry field, but a bit too much chemical taste to warrant mention as a recommended pipe tobacco. If I've got to baby the tobacco to coax out a bit of flavor, I would just as soon spend a few more dollars to buy a better, slower and cooler burning tobacco.

What Bugler has going for it is price and availability, and for those who enjoy a fast-burning, unflavored burley in their pipe, this may be a good choice at the price point. But even for OTC fare, I would opt for Sir Walter, Carter Hall, or a number of others above this if given the choice. This would probably be an excellent choice for those looking to the pipe in order to quit cigarettes. But please don't take this as an example of a quality burley pipe tobacco. As for the Virginia component, I don't taste it.

One of our local pipe club members brought his pouch to a meeting maybe a year ago and some of us tried it. One fellow, who loves RYO tobacco amused us by trying to put this in one of his cigarette wrapping papers. The cut is definitely made for pipes, not cigarettes and he needed two papers and the wad looked out of whack. He did manage to smoke it but not without care and effort.... and that's the same way I smoked my bowl. I took care not to smoke too fast because this cheap Burley/Virginia combination burned hot and it was an effort (and not a successful one), to finish the bowl.

I began my pipe smoking with bulk bags, it’s been some serious time since I have gone back. I’ve never known a serious pipe smoker smoking this consistently. This was always THE roll-yer-own tobacco I knew growing up. I must say though, I’m rather surprised with it. From time to time I enjoy RYO products in a pipe, but they are in a distinct category. You know what you are getting, and if that what you like, then that’s your business. This on the other hand has a little extra. It has some entry level pipe tobacco merits, and for this, it’s gets a small nod of both surprise approval from me.

I would characterize the aroma in the bag as sweet and nutty. Has an Old Timey Classic (OTC) feel right out the gate. Granger, PA, Sir Walter, ya know...the usual culprits.

The cut is ribbon, but it has some quality control issues. In this I mean there is a plethora of stems and course cuts, but it doesn’t seem as if it is an intentional cut. Shows a lil lack of care but it’s not unmanageable.

There is a mix of bright leaf, ruddy brown and some rich browns, but nothing overtly dark. Again harking back to the OTC look and feel.

As for moisture content, I find that it’s a crapshoot. Whether in the bags or in the tub, some are on the dry side and others are perfect. I usually buy this from one place and it doesn’t sit in the store for long periods of time as we have many roll-your-own folk in my town, and it’s a consistently moved product. So, that somewhat takes that factor out of play. I’ve found that almost all bulk bags of any tabac usually tend to be dry and tubs almost always good to go, but Bugler is well, like I said, a crapshoot. I think this goes back to some QC issues.

I air it out and mason jar it a few days before I smoke it. It packs very well and it takes to flame pretty easy. First half has what you’d expect. It’s thin, has a small walnut-type flavor, lil ashy flavor. Reminiscent of a full flavored cigarette, but the nutty hints make it somewhat OTC. It lacks the refinement of others that it emulates, but it could be put in the low end of this category. Its a slightly sweet tabac also. This is relatively consistent into mid bowl, but that fizzles and unless managed, some tongue fatigue sets in. This is a tabac to sip and go slow, bite would be a shining feature if smoked fast. This is readily apparent by the middle part of a bowl. At the end of the bowl, it turns flat and the nutty flavor goes mute. Leaving the smoker with a very classic cigarette taste. In the end, you are left understanding why it’s a popular choice for roll-your-own smokers, but you also get why the put “pipe tobacco” on the bag. The sweetening agent has me reminiscent of a classic bagged cavendish like Captain Black gold. Though, it definitely doesn’t have the vanilla/caramel/buttery notes that is present in a cavendish as that, but that general sweet scent and flavor that dances around for a while is roughly similar. Not an aro for sure, but the aforementioned hint of sweetness is pleasant enough and is a nice smoothing agent.

It burns down to a fine mid-grey ash, some dottle. This is definitely an all day blend, of smoked slowly. It doesn’t leave an acrid smell if left and picked up hours later. I did find that this does burn a little hotter than I would have liked, even with careful smoking.

The aroma is pleasant to me. I would say people around you are not going to love it, though they might not absolutely detest it either. It smells like an unfiltered Lucky Strike or Camel. So, I wouldn't say it isn’t really unique in any particular way. If the people around you hate the smell of cigarette smoke, this isn’t the pipe tobacco that will win them over.

This pairs well with cream ales, any classic American lager, German/Mexican style lagers. A Gin Rickey, Chairman’s Choice/Whiskey Sour all pair beautifully with this tabac. I did not particularly like any fruity drinks with this (Painkiller, Zombie, Blue Hawaiian, etc.)

In the end, it’s a cigarette tabac that has a few qualities that make it a cheap bit solid pipe tabac. Its main faults are the bite and the heat. The mild-semi flat flavor I would not consider a fault but rather a preference. This also makes a great transition tabac for cigarette smokers. It has just enough of both to fit that roll. It has half the qualities of an OTC with all of the merits of a full bodied cigarette. I think there is a place for this tabac. Yes it’s rather one dimensional and not very special, but it’s honestly a good filler/mixing tabac. It can smooth out a gooper, or add a little air to a heavy perique. It can bring a cigarette smoker into our fold. It also can be smoked in a cob while you cut the grass. It’s simplicity makes it versatile. While there are better options, and this could stand to see some improvements (mainly quality control) I don’t think it’s worthy of being called craptastic.

All in all, I recommend to the person who mixes their tabac. The newly converted ex-cigarette smoker. The, who cares if I leave it in the garage, kinda fella. Now, it has a bite, so newbies had better learn to smoke before jumping in. So, I’d say stray away until some fundamentals are grounded before picking this up.

It’s not going to wow you, but it is gonna fill that bowl with simplicity at its finest, and that’s something worth mentioning.

I got this is a gift with an awesome pipe rack.

It is pipe tobacco, I thought it was handrolling tobacco. It tastes similar to the cigarette version that is nationwide mainstay. If you've never smoked it, it's a manly old time kind of smoke. John Wayne probably rolled it in Rooster Cogburn. My guess is the other fellas here don't like this bc they don't like the cigs. I smoked of a ton of the rollies in my high school years.

Kind of a thick shag cut. Smells like burley and maybe some Turkish. Golden and brown, like they say. Packs well enough lights easily. Burns a bit quick, but it may need some hydrating. Tastes like bugler, it's a unique flavor. It's burley and spice and a bit of tang. The tang is a little bitter at times. Like the cig blend, but deeper and def not for inhaling. The nic is there, more so than a lot of other otc blends. Burns hot if you puff at it, but dry and clean.

I tried it a small cob to taste it, and didn't think it was bad at all. In a bigger cob, it was a bit better. I feel like that may be the idea behind this stuff. Kind of mindless cob smokin kinda blend. That being said, I'm gonna try and do some blending with it. I will probably stuff a mason jar with this to keep in the shed for yard work time. Not sure if I would recommend this to someone who is not a handrolled cig smoker.

Perique has written the definitive review and I agree on almost all points. To quickly recount my experience I first bought this- foolishly, but out of ignorance and availability, rather than outright stupidity- about 13 years ago. I last bought this about 13 years ago. This was a failed experiment in learning pipe smoking, from which I barely recovered. This orangey shag burley is a mess. Flavor is lacking, so high on the hot air factor despite some strength. In French, the aroma is called eau de cigarette. The springy shag cuts invites the uninitiated to overpack and it will burn wet. The central thesis of the last review was that this is in fact a pipe tobacco, although an extremely poor example. Here is my question: Is Bugler best as? A) a roll your own cigarette B) smoked in a pipe C) as an absorbent material in the trash can D) tinder in the wood stove. I shall not dishonor this fine hobby by ever igniting this product again.

Purchased From: In store

I found that in a cob packed on the loose side Bugler pipe cut is not bad. Something about the cob takes away that hotness and chemical flavor. In any of my briar pipes it is exactly as described in the review by Perique.

Age When Smoked: right after purchase