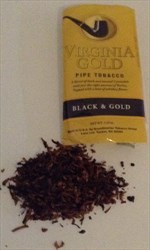 A blend of dark and toasted cavendish with just the right amount of burley. Topped with a hint of whiskey flavor.

Notes: Still available OTC, but Pipesandcigars.com has the exclusive right for online marketing.

I'd never tried this blend but I picked up a couple pounds of it because it was a great deal, on sale for $12/# in pouches, which is less than I normally pay for bulk leaves. I figured if it's good, then I got a great deal. If not, then I can rehabilitate it by blending or pressing flake tobacco with it.

Upon opening a pouch, I was met with a mix of basic tobacco smell and artificial sweetness. Neither was overpowering. But hope springs eternal, and when I lit up a bowl, I found that it actually tasted much better than it smelled. Still not great, which I why I give it a 2 overall, but not too bad, especially considering the price.

Room note - Mrs. Bruck says it smells okay, but she's not inviting me to smoke it indoors either! It burns well right out of the package, allowing it to be smoked slowly enough to avoid tongue bite.

So even though I now have a whole pile of it, I won't be making this my go-to smoke; on to plan B. Trying it right now mixed with straight Latakia, about 50/50, which is quite good - the mild sweetness and pungency go quite nicely together (full disclosure - I'm more of an English fan).

Upon opening the bag I was greeted with a very strong whiskey aroma. The whiskey flavor overpowered the 1st third of the bowl and then faded away. The tobaccos dominated from then on with the whiskey flavor barely peeking through. No sweetness to the smoke. Smoked harsh and on the hot side no matter how I puffed or packed the pipe.

The tobacco was on the dry side so I rehydrated it very slightly which improved the smoke a little, but not by much. The Mrs. barely detected any room note. Actually the tobaaco tasted better when the whiskey flavor dissipated. Slight dampness left in the bowl.

1 star (D) no matter how good the price point.

Update 5-4-2018- My philosophy: There are no bad tobaccos, some are just better than others. After jarring for a month I thought I'd give this another try. Both pouch note and smoke mellowed somewhat, but alas I just could not warm up to this blend. Being very generous I'll go 1.5 stars. (D+)

Similar Blends: Borkum Riff-but not so much..

The toasted Virginia cavendish is indeed a little toasty with a bit of grass, a little citrus, and maybe a drop or two of honey. The unsweetened black cavendish is mildly sugary is a support role. Playing back up is the nutty, earthy, slightly molasses sweet burley. The whiskey topping tones down the tobacco a little, but is mostly a team player, and slightly weakens near the finish. The strength level just passes being mild, while the taste is a step shy of being in the center of mild to medium. Hardly has any nicotine. Won’t bite or get harsh. Burns cool and clean at a moderate pace with a fairly consistent flavor. Leaves little moisture in the bowl, and requires an average number of relights. Has a decent, short lived after taste. An all day smoke.

Very mild blend, did not catch the hint whiskey until furth down the bowl. The natural sweetness of the Dark and Toasted Cavendish mellowed out by the Burley made for an overall smoke that would be great for those wishing to experience an Aromatic for the first time as it is a mild Aro and therefore would be good as a sipper for a palate used to American/ English blends.

Overall I find this would be a good Aro for that early morning smoke or even as a blend used to mellow out those stronger Aromatic's. I'm used to more flavor in an Aro, otherwise this would get a 4 star.

When you open the pouch, there is a raisin like sweetness that hits first. Then the smell of Cavendish tobacco comes through. It packs well and lights well. Now, the comparison to 1Q is that this one tastes less sweet and definitely is more golden than black. The aroma reflects this emphasis on gold. The smoke is full and the taste stays the same throughout the bowl. The flavor is mild and there is no bite. Admiral's Choice Black and Gold is more black than gold. And, unlike the other two, there is no vanilla that I can detect. I like this one for Summer smoking while the Admirla and 1Q are best for Winter and Fall. The one thing that this blend has going for it is price. By the ounce, it is just a touch cheaper than the others.

I like this one! Is it $20 a can fare? No, but it's a solid smoke. Very similar to Smoker's Pride Whiskey, it's slightly sweet, a tinge spicy and has an old-fashioned maltiness to it that's hard to describe. This is one of those bulk types you put off buying, but glad that you did buy it when you get ahold of a bag. Airing out brings out a more toasted quality. When I opened the bag the moisture level was perfect. Has a nice pouch note but somewhat nondescript. About midway down the bowl the experience is a smooth and monotone, but in a good way. Can't say it's four stars, but I'll give it a 3 and a half rating. Best of all your wallet won't be hurting.

Was gifted a pouch of this by my buddy D. Thanks bro.

Natural tobacco flavors of nuts and sweet hay with a touch of earth and a nice toasty note The whisky is fairly sweet and taste like whisky (duh). It's a smooth smoke and burns cool. Very few relights required. A simple yet tasty pouch blend that makes your wallet love you. $1.99 a pouch. Can't beat that.

Mild to medium in body and taste. Flavoring is mild.