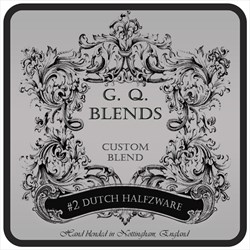 A modification on the Breakfast Blend which was created for one of our customers. We added some aged course cut; dark air cured Virginia taking the attention from the Kentucky and Turkish. The tobacco packs a full and earthy taste, while the Turkish adds a little cream. The classic Dutch Halfzware style rolling tobacco, but for the pipe.

I have been very excited about trying this one and upon my first puff I was equally delighted! When I opened it and took a sniff the most prominent aroma was a ceder/woodsy one, nothing particularly overpowering. The mix has a few robust pieces in there all mostly a medium brown in colour but there is a very small amount of light yellow leaves in the mix too. It has a splendid water amount to it and this aids the burn. It takes me a while to deliberate words to describe the flavour and in the end a simple description comes to mind... "a bold smoke". This is a tobacco that might be too much for more delicate, aromatic smokers, it's more of a blend for those who favour pure tobacco flavours. Of the three it's the Virginia that gives the least flavour, there is a slight hay note but that is definitely the last in line! The main flavour is similar to good cigar tobacco with an added nutty quality too. The smoke is quite cool, again this attests my thought of this maybe containing less Virginia than the other varieties. Nicotine? Again it's not for someone who wants a tobacco with delicate qualities, this satisfies my cravings with great ease! When the burn is over the remains in the bowl consist of mainly light grey ash with not much dottle at all.

This is a pleasing smoke that unequivocally earns full marks.

The Virginias have some citrus, a bit of hay and a little grass along with some floral earth. While evident in every puff, they also act as a base for the lightly nutty Kentucky (a minor player), and the more noticeable woody, creamy earthy sweet Turkish. The Turkish has a very light sour hit here and there, and a mild boldness more in taste than strength, but it has some of that as well. The nic-hit is a little past medium as it builds a little during the experience. Not quite an all day smoke though it was designed to be a lighter smoke compared to some of Glynn Quelch’s other products. I rate the strength and taste at medium, though the taste is just past that. There is a certain delicateness to the experience which I attribute to the kind of Turkish employed in the mixture, which makes for repeat performance during your smoking day. I detect no topping. Burns as a moderate, easy pace with few relights, a very consistent flavor, no bite, and no dull or harsh spots. Leaves no moisture in the bowl. The after taste is pleasant as is the room note. Three and a half stars.

Like the other GQ blends I have tried, I am again reminded the Glynn Quelch is a blender that I simply occupies his own space in the blending world. Like StevieB, I have had needed some time to come up for a word for this blend. The pouch scent of Halfzware is “rich” and offers the similar “curry-like” scent of his Breakfast blend, although as with that blend, I don’t taste any added flavoring here either. The cut is thin with some small pieces and it packs with ease. I suspect that there are some Gawith Hoggarth blending tobaccos in this blend as the Virginias and Kentucky taste similar and there is a the slight floral note that I associate with those blends, but again, it is only slight. There is a savory quality to Halfzware and I don’t get any sweetness from the Virginias or Oriental components. But it is a complex blend to say the least, bringing out different dimensions in each bowl. It is medium in strength and has an ample amount of body. I can’t recall off the top of my head a similar blend to this one, that’s a good thing!

Amazing! Such a nice change. Completely different from anything else I have smoked. The flavour is a really nice woody/oaky taste but not too much. Its mild (I usually find them boring) but am really enjoying this. About to purchase some more :) Gets spicer and fuller towards the end of the bowl.

Age When Smoked: Straight from shop