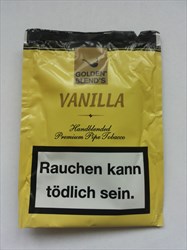 This is a mild blend tobacco of hand picked Virginia and burley tobaccos. Distinctive, pleasant fragrance with the taste of exotic vanilla.

Notes: Due to EU regulations, this is sold in some European countries as No. 1.

Another tobacco with an aroma much more akin to sweets than tobacco... Once lit this produces a mild Virginia flavour smoke with surprisingly just a hint of sweet vanilla. It smokes well but burns to a very coarse ash with much dottle. It is not too wet when smoking or at the end of the bowl but it did require many relights. I perceived no bite throughout the smoke nor for that matter did I perceive any nicotine! The biggest surprise is the room note, it is quite a pleasant mainly tobacco scent that really lingers. Not much more to say than that - certainly not in any way unpleasant but ultimately completely forgettable.

The immediate smell on opening the packet is of dramatically sweet cloying artificial VANILLA. I may have wow'd and coo'd about such a smell in my younger more innocent days, but now as a cynical world-wise grumpy middle-aged old man it's a smell I could do without. It's like the irrepressibly cheerful person who "likes mornings" that you meet when you've dragged yourself out of bed with a killer hangover. Too much, too soon.

When smoking the flavouring is detected more by those around you, rather than the smoker him(her)self, and it's by no means an unpleasant smoke. The sort of thing one can forget you're smoking. So as a standby pack, when the rest of the cupboard is bare it's not too bad, and the price was very reasonable.

Therefore I was surprised that the tobacco was neither overly moist nor had an overly artificial room note. It smokes well, if not very cleanly (ash dotted with black remnants) and smells strongly of vanilla.

In terms of the taste, I don't enjoy virginia very much (this was literally the only tobacco they had at the corner store), but the flavoring does not have much of an impact, apart from the tobacco tasting quite salty. So if you like virginia and cavendish, this will do.

Take care not to inhale, I accidentally inhaled a bit of the smoke and it was very unpleasant.

To someone looking for something like this in principle I would recommend MacBaren's Vanilla Cream Flake over this blend in every way, even if that is twice the price.

Smelling the blend gives an unmistakable 'whack' of vanilla. Similar to the cloying smell of butterscotch sweets. It's exceedingly false and a good indication of the smoke that awaits.

If you like vanilla aromatics, as I do, this is a must try. From word Go it's a smoke that's loaded with creamy vanilla. The smoke itself is full bodied in build, being palpable and cool. It can give a little tongue bite but it's more of a nibble than a proper bite.

A very false tasting blend but I like it.

GOLDEN BLEND’S N°1 (a.k.a. Golden Blend’s Vanilla) is the same as Golden Blend’s Vanilla Supermild you can find here under the same brand but with another entry. It would be good to merge them into one voice to avoid confusion. Besides that, I think the brand is Poschl Tabak from Germany while Golden Blend’s is just the name of the product line, even if I could be wrong. But let’s get to the review. OTC product, this blend is an all-day aromatic, unpretentious but honest. A discreet aromatic which tastes of tobacco. Opening the pouch, the scent is vanilla. The taste is also vanilla. But it doesn’t cloy. The vanilla flavoring is mild to medium and it is pleasant and doesn’t bore. Mild in strength and taste G.B. N°1 has an agreeable room note. Cheap with a good price-quality ratio. Not only for aromatic blends’ lovers. In my personal rating system (from 1 to 10) my score is 6 and two stars.

When you open the pouch the room smells immediately like vanilla. It's a very pleasant smell. The tobacco is not to wet and because of this you can smoke the tobacoo instantly without drying first.

The mixture of Virginia and Black Cavendish is approximately 60:40.

Lighting up the tobacco is quite easy and he burns smoothly.

The taste is not so sweet but mild. There is no burning on the tongue or on the gums. After a while the taste gets very dry on the tongue. The room note is very pleasant and it smells not only like vanilla. A little bit of honey smell stands in the room, too. So, I will recommend this tobacco to smokers who love a good vanilla mixture of virigina and black cavendish. But in my opinion I prefer the Danske Club Black&Virginia more.