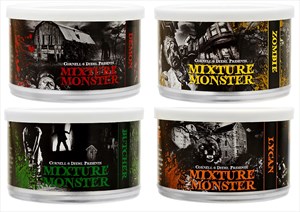 "Across the New World a darkness brews, While hanging tobacco emits its flues. A rich Cavendish blend both dark and light, With apple, caramel, and chocolate in sight. Four new designs to frighten and scare, It's Mixture Monster, the world prepare!"

Halloween blend? Yes, Halloween blend. We decided that while everyone seems to have Christmas covered, ol' Hallow's Eve was unjustly neglected. C&D agreed, and so churned us up a witch's brew of rich black and light Cavendish and eye of newt, sweetened with aromas of appropriate treats - chocolate, caramel, and apples.

This tobacco is great! If you like aromatics, you’ll love this one, too.

I was initially skeptical because of the “Halloween” marketing. Just seemed a little too gimmicky… almost like it was compensating for a less-than-stellar blend. But I bit. And I’m glad I did! The aroma from the tin is just plain great. The smell of butterscotch, toffee, and a hint of chocolate is enough to make your mouth water. The marketing says it’s also supposed to taste like apples, but I never picked up on any of that – the other flavors are there in spades, though.

I let some of the tobacco sit out for about 20 minutes before filling the bowl – the ribbons were a little on the moist side, so I think a little drying time would be advised. I was easily able to get the pipe (a Peterson Smooth Green Prince Churchwarden) packed and lit without any issues. This tobacco has a very light sweet taste on the palate and the aroma of the heavy white/blue smoke is very agreeable. The toffee and chocolate flavors were still a bit noticeable once lit, but not nearly as pronounced as from the tin. The tobacco stayed lit and only needed to be tamped and relit a couple of times along the way.

I definitely like this tobacco. I originally purchased 4 tins (1 of each label – Zombie, Lycan, Demon, and Butcher) and was a little worried that I might be stuck with some so-so tobacco if I didn’t enjoy it, but my initial concern was quickly erased after the first few puffs. I don’t know that I’d want to smoke it every single day, but it is rather perfect for this time of the year. Well done, C&D!

I love halloween so this blend kind of caught my attention with the halloween marketing. I bought 2 tins to try it out (demon and lycan). I opened the tin expecting just caramel and apple that the supplier noted but once I took a whiff of this stuff I found out its much more complex than that. theres hints of caramel, hazelnut, chocolate, slight toffee, and fermented apple. All together it smells just like a candy corn. My friends love the smell and taste of this stuff and its become a tobacco that everybody wants me to share with them. So to say the least, it smells GREAT.

Not only does it smell great, but it tastes great also. It smokes very similar to the smell with lots of carmel and hazelnut with some chocolate and the fermented apple comes through subtly. The room note is incredible. Last night a bunch of friends borrowed some to try while I smoked some black irish and the smell of their smoke was incredible when it got blown my way. It packs easy and lights fast, staying lit till the bottom of the bowl where I usually relight one or two more times. Its easy to smoke and pretty delightful for you and those around you.

If you're and aromatic smoker, give this stuff a try. Its easy and tasty and you don't have to baby it. I highly recommend this blend to halloween fans out there because it tastes like the candy of the holiday.

Update 8/11/15 After seeing the video on Smokingpipes.com about the making of the New 2015 C&D Christmas Blend (which btw sounds delicious with Chocolate Sauce and Christmas spices) I was reminded of my mason jar of MM. After a year of aging the leaf has mellowed considerably. Like most C&D it was packed young so the aging has made this great blend exceptional!!! It's amazing that Smokingpipes sold out of all their tins but there's only 3 reviews?? Anyways I truly hope they continue making Halloween Blends!

Like an idiot I waited until Halloween to have my tin of Mixture Monster arrive. I waited looking out the window all morning for the UPS guy to arrive. It was worth the wait, Apples, Caramel and Chocolate taste and aroma. MM is a chunky blend of mixed cuts that really helps it smoke cool for such a rich aromatic. I get notes of toffee, chocolate and Candy Corn, being so rich this is really best left to special occasions and holidays with the family or out in public. C&D has really outdone themselves this time and deserves to be applauded for creating a Halloween Blend for us pipers. We just love pairing a blend to a holiday or season and MM fits the bill as a Fall / Halloween blend.

Btw a neat trick I've learned is that Cornell and Diehl's paper labels wrap nicely around the Ball Jars middle, use a small piece of scotch tape to secure and voila! Looks great on a shelf...

As other reviewers have said, it smells great in the tin. What I personally get are notes of caramel primarily with chocolate and honey undertones. My buddy said it came across as rum. Either way it smells great! It almost comes across as too sweet but don't let that put you off. In the pipe there is a good bit of sweetness off the light. It tones down a bit but maintains enough sweetness to complement the scent. The flavor is almost of candy corn or honey with hints of nutmeg.The room note is very good and similar to the taste. Low strength and fairly cool smoking for an aeromatic. Not as easy to get tongue bite as with many aeromatics. Will be getting another tin to keep for later in the year!

Conclusion: Aged just roughly four months, this is a review of the second edition - Monster Mixture II. A confectionary blend that satisfies one's sweet tooth. A mechanically fine tobacco of medium strength that I can greatly recommend to those looking for an aromatic, this is a nice one.

Taste: Smells of synthetic strawberry in tin, fruity and sweet, kind of like the swedish christmas candy "Tomteskum". Tastes like strawberry, honey and caramel, quite heavily so, throughout the entire bowl. I did not pick up any apple or cocoa, but can see how they added to the sweetness and fruityness. I would say the flavouring is a medium, with C&D Autumn Evening and my reference heavy one, but still this is really sweet. The last third or so starts to show off some grassy notes from the virginia, however the burley remains undetected in taste but is present in feel - a slight pepper-ish tingle on the tongue. The finish reminds me of that slightly ashy taste of burley, so i guess it adds to that as well.

Mechanics: Burns clean and needs virtually no relights after some drying. It burns down to a fine grey ash, does not bite and strength is about a mild medium.