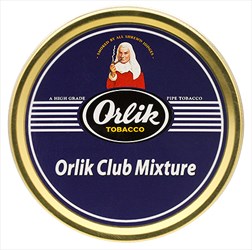 Notes: P&C's website includes the information that a caramel/toffee flavor is in the topping.

The Virginias offer mild grass and citrus, which is often a theme with Orlik aromatics. They form the base of the blend. The burley is lightly nutty, wood and molasses sweet with a touch of earth. The black cavendish has a mild sugar hit. The caramel, vanilla and toffee toppings may seem mild, but they do sublimate the tobacco taste to some extent. The vanilla takes a little of the lead over the other two toppings that underscore what you notice from start to finish. The strength and taste levels are mild. Has a very mild nic-hit, and it won’t bite. Everything that went into this mixture is well harmonized for a very consistent, smoothly sweet flavor that never weakens. Burns fairly cool, and very clean at a moderate pace. Requires few relights, and leaves virtually no moisture in the bowl. The after taste is as mellow as the taste you get when you smoke it. Has a very pleasant room note. A mildly sweet all day smoke that gains just a tad more strength in the last quarter of the experience.

Although it says it's a ribbon the pouch contains more of a mixture of different cuts, some ribbon, some small shaggy bits and some little clumps of flake. The flakes are not of a size to require rubbing out, they are fine to 'stuff and puff' but they are still tiny flake pieces. The aroma that comes across is a bit deceiving, it smells a lot more aromatic than the smoke tastes! Straight from the sealed pouch it's ready to smoke.

Once lit it's a very relaxing smoke. I can't really identify the added flavour as vanilla exactly but the smoke has a mild, sweet, creamy quality to it. Due to the creaminess I think the ultimate accompaniment would be a glass of Irish cream liqueur! This burns even giving off a fairly cool smoke. On the negative side it can bite a little but that's eradicated if it's sipped a little. I find the vanilla flavour becomes a little more pronounced after the first half of the bowl has been smoked, it still has a mild quality but is more identifiable as being vanilla. I find the nicotine to be quite mild in Club Mix', I think it would be a great blend to begin the pipe smoking hobby with.

I don't agree with the term aromatic being used for this, there is a tiny amount of added flavour but not enough to warrant the term 'aromatic' being employed. Although there are a few tiny issues it still deserves full marks.

Love it as a daily smoke. I tend to smoke hard and never got a bite from this one. Fairly strong chocolate notes for me. I am not an aromatic fan but this one has enough other enjoyment for me that I love it, particularly the room note. I plan to get more tins at my next opportunity.

Age When Smoked: My age or the tobacco?

Purchased From: Pipes and Cigars online, I think

Not something I'd normally purchase, but grabbed a tin on the cheap in a clearance sale. This is a solid danish style aromatic, pleasantly sweet without gobs of topping. Moisture level is just right out of the tin so it smokes clean and cool...big pluses when talking aromatics. If you're a fan of lighter aromatics you can't go wrong here. Personally, I probably wouldn't purchase again just because my tastes lie elsewhere. It's well done and reasonably priced, no regrets having tried this one.

A nice mild tobacco that I will probably buy again. The smell of the tobacco from the pouch is fantastic, toffee and butter, vanilla. The colour of the tobacco is mostly towards orange with darker bits, beautiful. So it is Virginia, Burley and Cavendish. But there are mote I think. If you spread it out and look at it you´ll see some rougher bits, it seems like cut plug pieces. It is easy to pack and smoke. But it is not so easy scrape out, seems to leave unburnt tobacco that really sticks to the bowl.

But now something strange happens when you smoke, there is no connection between that wonderful tin note and the smoke itself. When you smoke it you don´t taste that toffee, vanilla taste I think. But the people around you, they get it and say it smells wonderful. But it is still a nice smoke and sometimes it surprise you with a darker taste, from the Burley or cut plug. So it is interesting enough.

Opening the tin I smelled chocolate. Clearly milk chocolate, because I favor pure. This is the first time I disagree with Jim Inks. I definitely do not smell vanilla. In the smoking all flavors are gone. As if this is not an aromatic mixture. Strange but experienced. The tobacco burns very well en it completely burns up in my pipe, but that can be the quality of the pipe - new and Meerschaum. Little nicotine. pleasant to the end. Room note mild and pleasant. All day smoke.

Having enjoyed the Orlik golden sliced, I thought it was time to sample it's cousin and shelfmate, the club.

I was surprised that this was an aromatic, assuming the blend would be another version of the golden sliced, like Blue and Red Davidoff's or Capstans blue and yellow for example, or better still, and more obviously, St Bruno RR and Flake.

The pouch offered a rather unexpected aroma and it was not like I'd ever come across before. It was a mix of cold coffee, a hint of something sweet-ish like chocolate perhaps with a ruddy, dusty, urban undertone. Not unpleasant, but it certainly wasn't a typical aromatic that I know.

The tobacco itself was standard and quite moist and the char light promised more than it acually delivered. The pouch aroma died away quickly at smoking and just gave way to a bland rather generic virginia flavour. The was no room note at all.

It behaved itself in the bowl and required only a few relights and I was using this as an everyday smoke. Briars were safe enough, although I didn't try in Meerschaums. I found the best way to smoke this was in a larger briar bowl and smoking in one sitting. Relighting from cold/paused was vile.

A full pouch later and I'm still not sure this should be classed as an aromatic and certainly would not buy it on a regular basis, although it might improve if decanted and cellared for a while.

Long thin-cut ribbon nicely tinned (couldn’t open tin with my quarter). Nice semi-aro quality blend for slip stream and bowl note. Easy draw and enjoyable sipping until ½ bowl then 5 hiccups (nicotine indicator) so I give this a 2 star. Am thinking up to this point I could have made this quality blend part of my rotation, so then I changed my mind.

Age When Smoked: fresh from the tin

Club Mixture burns very well to ash. It's neither hot nor overly wet. Little to no bite. The flavor is mildly sweet (don't know about any "toffee", though). It also lasts a good while in a pouch. I would say it's more mellow than CB regular, but not as bland as, say, CH. This blend is good in the sense that it does not do anything wrong. I hate giving it more than it earns, but it gets 3 stars, reluctantly. If all the awful, unsmokable blends ceased to exist, then this would necessarily get 2 stars.

So, I am confused as to why this has two entries and which entry goes with the tin in my hand. Since this one is for the re-release and it it's 2019, I wrote my review here (kick my shin if I am wrong).

Upon opening the tin you are greeted with a little advert explaining how discerning judges only smoke Orlik, which made me want peanut butter, since only choosy Moms choose Jif. Rather than peanut butter however, this Aromatic gives off carob paired with a slightly sour raisin, similar to the healthy chocolate cookies sold by our local organic grocery store. It is sweet, but not terribly so, yet earthy in body. The ribbon felt great and wasn't overly stewed, with a few meaty bits tossed in for good measure. The mix was not sticky to the touch and fired up without any fuss or muss.

While it advertises vanilla, I kept getting a nice subtle chocolate without any ultra sweet flavoring found in many vanillas I've tried. The smoke is pretty mild, and the flavor pleasing, so feel free to puff on it all day.

As an Aromatic smoker, I was in the right place, and this club is friendly enough to accommodate non Aromatic fans wanting to relax for the day without eating some kids cereal (though some may want to step outside for a cigarette since this won't satisfy an addicted nicotine fix).

Edit: I knocked it down to two stars, as the flavor became bitter and bland after about a week from opening the tin.

This is a light Danish-style aromatic with a vanilla toffee flavoring. The flavor is just a bit too heavy and overwhelms the nice tobaccos used. I greatly prefer the Mac Baren Vanilla Creme, which is why this Orlik only gets 2 stars.

Orlik Club Mixture provides a colorful mix of Virginia, Burley and Black Cavendish in different cuts, including some ready rubbed. There is no imminent smell of a topping detectable to me and it seems like only the BC was cased in the process of making it. I got a nicely balanced, very pleasant blend of tobaccos in taste. The casing does provide some creaminess to it, very subtle and not to compare with modern high aromatics. This is more a Danish classic in type.

Too much heat lets it bite and produce a little moisture at the bottom. I find the Club Mixture not spectacular, but it is an honest and solid smoke that just feels right. For just a tad more casing try the Mellow Mixture (beige/fawn pouch).