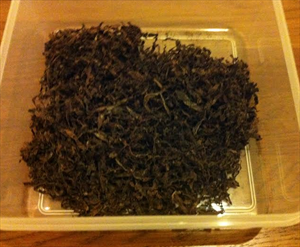 If you want to be sure of just how spicy and strong Perique is then smoke a bowl of this neat! The ribbons are dark brown in colour, not black but a dark brown. They are quite large in build and sadly a little damp but I guess as this is designed for blending that shouldn't present too bigger problem as what ever it's used in could probably be left for a few weeks to settle down or you will just take a small pinch to spice up a blend.

For the purpose of this review I am smoking it straight and it is a real power house with nicotine! I think how this would be brilliant for someone who loves nicotine to use to add to a pre made mixture to beef it up. This is strong but it smokes comfortably, mid temperature with no bite. This makes for a really 'zingy' novelty smoke, granted I couldn't smoke it neat regularly but I think that it's an experience for more pipers to try!

Two stars for a smoke on its own but for what it is, a straight Perique, I feel it is of a quality that deserves four!

Ok; if you have ever smoked blends like orlik bullseye's and reached a juicy fruity zone of bliss every once in a while this ingredient was probably the culprit. This is blending perique of which I bought a 50g loose sample for creating my own pleasures. This review is partially for the ingredient itself and some trials of mixing.

Smoked neat out of interest to get to know it on its own is its own education.. Despite its legendary potency it is actually smokeable on its own. Quite moist in the pouch it takes light ok anyway, but its a cool smoker and I can see why smoking it neat is a sacrilege. It doesnt burn hot enough on its own to release its full latent potency,it is more efficient backed up with Virginia. It tastes just as potent mixed with Virginia because the Virginia burns it harder; hotter virginia plus cooler perique meet halfway at a better smoking temperature that not only gives the same full taste as neat perique but you get the added dimension of zesty lemony Virginia as well; hence a 'va/per' blend is more tasty than perique on its own.

There is a point where adding more perique to a virginia blend doesn't actually give you more perique in actual taste but just reduces the citrusy sour Virginia and leaves you with the more cooler berryesque perique.

So on its own; its a very rich stewed fruit taste, kind of fermented like prunes. It is like tasting prune juice tobacco. It still tastes of tobacco as well in its core. It isn't as peppery smoked neat either I have noticed,this only seems to come out when blended with a hotter burning leaf. I don't yet know if aging will bring more pepper later from the bag or if this only happens in aged blends? What I have learned from playing around with it and from the best va/pers I have smoked is;it is not the perique alone that supplies the exquisite sour plum factor; the perique supplies a soft deep fruity plum and the bright Virginia combination supplies the sour. The blenders of good va/per mixtures know this golden ratio better than I have got time to find out. If I want to smoke a pure va/per I would probably reach for a ready blended brand before making my own for the sake of convenience,their experience of golden ratio mix and ready aged condition. But for experimenting or saucing up anything which isn't a pure va/per which I feel could do with a pinch of this condiment to save it or enrich it in some way is great because its potential addition doubles the range my entire tobacco collection..

It definitely does good wonders to the UK pouch version of Three Nuns;softens the edges, cools the smoke, thickens the smoke, enriches it like raisens to cereal. I never got to taste the original incarnation of three nuns which was apparently a va/per (now its a Virginia /Kentucky) so I will never know what I have really missed, but a pinch of this perique added lets me invent my own nostalgia.

Three stars on its own, Four stars to what it does to the current uk pouch version of bells three nuns. Looking forward to enriching Gold Block in the future.

Similar Blends: stuff with Perique in it.

Nice baccy, but very strong, so this review is based on it as a blending tobacco. After mixing it with a straight virginia, it is quite apparent to me this tobacco cannot be smoked on its own. The tin note is absolutely horrendous, but I guess this is what perique is supposed to smell like (I'd never had the chance to see perique tobacco on its own up until now). Just to be able to do this review, I've put more perique in my tobacco than a master blender would normally do, but you don't need to put as much in it to be able to experience it. At times I was thinking it was only perique that I was smoking, so be advised. Nothing stands out in it if you compare it with other perique tobaccos available in the market now, that is, it is zesty, citrusy and full bodied, so it could be a great addition in your cellar to blend other tobaccos with to spice them up. The smoking experience is akin to a very fermented tobacco with a hint of Lakeland essence (not very pronounced). Another thing you need to take into account is the fact that this tobacco will change the intrinsic characteristics of whatever tobaccos you blend it with. That is to say you might loose on some aspects to be able to gain on others. 3 stars out of 4.

Out of couriosity (which killed the cat as we know) I smoked this tobacco straight. Well, if you’re into nicotine this is the strongest stuff there is. Of course there are no great nuances here, just raw strength. But it is smokable. The GH variety has a sweetish background and it is not as peppery as you might think. Good for the occasional smoke if you really need a vitamine N hit. I would love to compare it with St James perique, the original, which I suppose might have that fruity (like in rotten fruit) taste. But it was satisfying and I feel like a real macho having dared to try it. I must admit, I do like it! Beware, the pipe will stink after the smoking and give your next smoke some pepper, but this will go away after several smokes. Of note - the tobacco tastes salty if you put a tiny bit in your mouth (yes, done that, too). Four stars and I will continue smoking it. Then again, I like weird stuff like stinky tofu and fermented shrimp paste, so my taste is very peculiar. I am an avid smoker of English blends, BTW, with Nightcap being my all time favourite.