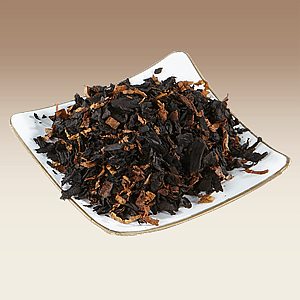 The black cavendish has a nice vanilla flavor that sublimates the grassy Virginia and burley, though a hint of nuttiness will perk through here and there. The cocoa/coconut topping competes with the vanilla for attention, and sublimates the tobaccos a bit. Has almost no nicotine. Won't bite or get harsh. Burns clean and cooler than your average blend in this genre at a reasonable pace with a consistent flavor. It’s very similar to the original, though this a cooler, smoother smoke, with just a little less coconut. The only drawback is that it requires a little dry time, which is hardly the worst problem to have. Leaves a little moisture in the bowl, and needs a few relights. Has a nice after taste and can be an all day smoke. I rated the original at two stars.

While this does have a fairly pronounced cocoa pouch note, it's reduced and never overpowering in the smoke. The vanilla plays a secondary part for me, which is just fine, as I wanted more of the chocolate and tobacco flavor to come through. And, although the tobacco taste is somewhat sublimated, it does still peek through occasionally, but is somewhat secondary to the cocoa. This will require some dry time, as it is a bit moist right out of the pouch, but well worth it. If you're looking for pronounced tobacco taste, you might want to look elsewhere. Otherwise, this is a well behaved, room friendly, all-day smoke, without bite or noticeable nicotine. I like it a lot, and am ordering more, but would rank it as a very solid three stars, due to the sublimation of tobacco taste. Other than that, sit back and enjoy! What's not to like?

Age When Smoked: Fresh from the pouch

I like this tobacco, its a straightforward old style aromatic. I never had the original, but have heard there was a little more "coconilla" (need more of it lol) flavor than the new match blend. This is definitely an all day blend just like Pa, CH just to name a few, but with the added aro smell. Smells like dark chocolate! This is a winner in my opinion!

Coconilla. What a cool term! I ordered every single match tobacco that was available. Even without reading the description, as soon as I opened the pouch, I could tell what this blend was all about. I was hit with an intense sweet, confectionary coconut aroma, with nutty undertones. Almond Joy.

The appearance looks to be 92% Cavendish and 8% Virginia. This blend is almost all dark/black tobacco. There are some very large chunks in here, so I took the time to cut up and break apart the larger ones to ease in packing down the road.

The blend was a bit sticky while packing. And when you do pack, do it gingerly and with little force. You will end up emptying the pipe and starting all over if you don't. It has very large chunks, it's moist, and will swell upon lighting.

Initial lighting and first half offers some great toasted coconut and nuttiness I've never had in a tobacco. The vanilla compliments the coconut well, without making it sickly sweet. This is a great warm weather blend, as it isn't heavy at all, and is very refreshing.

2nd half the coconut flavor is still there, but there is more tobacco flavor that comes through. Surprisingly, this burns fairly clean and dry, despite the stickiness on my fingers from packing. I puffed it hard at the last half to see how it behaved. Didn't bite or become acrid. I fact, it seemed to intensify the toastiness of the coconut!

This isn't one I would smoke all day, but it is a great change up from heavy English blends.