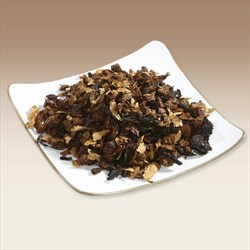 This is Sutliff's match blend for Country Doctor.

The lightly smoky, woody, earthy, musty sweet Cyprian Latakia, and raisiny, plumy, earthy, woody perique are barely condiments here. The perique has a lightest hint of spice possible. The nutty, earthy, woody, lightly molasses sweet burley is the main star, with the grassy, citrusy, bready, slightly sugary Virginia playing a support role. There are very slight fig and prune notes with a hint of a topping I cannot identify. At times, I get a slightly sour tangy taste mixing in with the sweet that gives this a minor complexity. Because it's a rough coarse cut mixture, I recommend a round bowl rather than a pipe with a narrow chamber so it will burn to the last bit. The strength and nic-hit are a couple of steps past the mark mark, while the taste is just past the center of mild to medium. Won't bite or get harsh, but it does have a few small rough edges. It burns clean and fairly cool at a moderate pace, and holds up its very consistent flavor to the finish. Leaves little dampness in the bowl. Requires few relights. Has a pleasant, short lived after taste. The room note is a tad stronger. An all day smoke, and superior to House of Windsor's Country Doctor blend. The major differences are that the Match is a little sweeter and fuller in taste, and doesn’t have the ashy, cigarette finish the original sometimes had. Less rougher, too. It doesn’t bite either, which could happen with the HoW version. I gave two stars to the HoW version.

I smoked a lot of HoW's Country Doctor. Yes it had it's warts but there were times when I hit just the right moment in a bowl and the flavors of the tobaccos and berry like topping would come together to meld into a good full flavored smoke. I still have some in a tin for comparison.

The new stuff: wide long springy flakes with variations of lighter and darker browns. To the nose it smells like mild burley mostly with nothing to suggest casing. Packing: this has bigger flakes so packing involves more than gravity feed. I pack several layers this with a tamp for each one. Takes a match easily and after the initial tamp and relight it goes on with minimal relights. Initial flavor is very mild, mostly basic burley and hint of something that is very faintly reminiscent of the original. I suspect its the condiments that are applied very lightly. Down the bowl the overall flavor becomes more definite but nonetheless remains quite mild. Smokes down to a grey ash, little dottle and doesn't sour at the end. This is a mild burley blend that requires little attention. Minimally aromatic. A simple no frills burley experience from a good quality leaf. It has none of the negatives of the HoW blend but the flavor is toned way down.

This was a tough one. I thoroughly enjoyed the taste, that is when I could get it. I had to puff a little harder than usual to get enough of it, and, of course, what happens when you do that? You get nipped. Even with a filter. The bite wasn't bad, rather mild, really, but still, it was there for me.

There is a topping of some sort in this, but I couldn't detect what it was. Whatever it is, it's really mild, and mostly there was just a nice tobacco taste. I liked this blend, just. I found it to be one of those smokes you could light up and forget about. Overall, a more or less pleasant experience.

Out of the matche's I've tried thus far, this one's on a slightly lower level than the other two (Edgeworth RR Match, Revelation Match). Still, it was worth trying.

I'll give it a strong two stars.

I must have gotten a bad sample or something because it tasted heavily mentholated. It tasted like an old Kool cigarette. If you believe this to be a mistake, please ignore this review.

I recently bought a large selection of "codger" Sutliff match blends and have been exploring them. Country Doctor is a cool smoking, extremely well behaved, relatively mild burley blend with a faint topping that comes through on the tin (bag) note but doesn't provide much taste at all.

The burley is noticeable, and it is a fairly nutty and somewhat "tobbacoish" smoke, but that is cut nicely by the presence of some latakia and Virginias. Started off just ok, but in the middle of the bowl had a "wow" moment as the flavors melded a bit. Picked up a bit of sweetness from the Vas and definitely a hint of smokiness from the Latakia. But both are clearly condiments here.

The best part of this tobacco is how well it smokes. Zero relights, which I know some people don't care much about but for me definitely adds to the smoking experience. Packed using the Frank method, and it just kept going and going. Consistent smoke output, medium density smoke, and burned very consistently all the way down to ash at the bottom of the bowl.

Although not a ton of flavor, it is an ovverall nice smoking experience particularly for those who like a straightforward burley with just a hint of complexity and occasional very mild sweetness. Did pick up a very mild nicotine hit.

To sum it up.. This Is GOOD !! Never smoked the original but I am smoking this every day. This is easily an all day blend... with just a slight natural sweetness to it. The blend changes every so slightly while you are smoking , and I like that. I sip this blend and have experienced no bite what so ever. This is a course cut and very easy to pack... I go a little light on the packing method as a looser pack seems to help increase the multi level flavor. I would very much recommend this blend.

Age When Smoked: Fresh From the Pouch

Similar Blends: This one stands on its own merits.

I'll preface by saying I have never had the original.

Pouch aroma of old timey Burley, and alcohol. According to my research, I did not know there was alcohol in the original. Or was there? If you inhale from a distance, you can detect the slight Latakia scent. Stick your nose close, burley and alcohol take over.

Judging by the appearance, I would venture to guess there is less than 8% Latakia in here. This blend is a bit sticky, it will form a ball when squeezed between the fingers. Moisture is a touch high, but a few minutes of dry time will give you perfect moisture. Loads well, if you avoid the cigar wrapper sized chunks you'll find in your pouch.

Initial lighting is slow going. Even after drying for 30 minutes, this blend takes off slow. Very slow. I would say on average it would take 4-5 charring lights. Pack very light, and firm up your pack as you smoke.

Flavors include a slight perfume note up front. Unlike the other reviews, This seems to have an overload of spicy perique. The burley is the backbone here, and the Latakia is slightly known hanging out in the back. This blend can burn wet, even when dried. Requires several relights, which worsen the taste each time. This blend seems very fresh. I have only smoked a few bowls (I like to smoke an oz before my final review) so I'll revisit after a bit of aging. and maybe dry it even longer. Right now, 2 stars

In my quest to explore all the OTC blends I can I came upon Sutliff's Match Country Doctor. With Burley, Latakia, Perique, Virginia and a flavoring of Liquor I thought this might be a good one to explore and explore I did.

Upon opening the bag my nose found the aroma of a light smoke with light woody, musty earthy and raisin that was pleasing. It seemed about right in moisture but received 45 minutes on a paper towel to dry and air out.

The cut is called a coarse cut but I found it to be some long, long thin ribbons, coarse and chunks. I rubbed it out a bit to break it down to make for easier loading of the pipe. I would recommend a shallower wider bowl for this. I used my 70 year old MM Bent Shank Cob because all my shallow wide bowls have been smoked very recently and while it took a bit of effort it filled well. Country Doctor lit right up and needed the average amount of relights. The smoke was medium and lasted in the air for a while. The room note is pleasant and this doesn't bite, but if pushes I believe it could give a tongue tingle. This burned very cool, medium and consistently and the flavor stayed very consistent also. No moisture. Burned to a gray ash. This could be an all day smoke.

Upon lighting it was clear the nutty, woody, musty earthy and a slightly sweet tangy flavor were the main features here. Very pleasant. Dancing in the background were a very light smokiness, with a very very light grass, a touch of citrus and a dash of raisin. Overall a very pleasant combination that played well with each other. If pushed I did find the tanginess would take center stage and become a bit heavy and I used that as the key to control how slow I sipped. The flavor stayed consistent and has enough flavors to keep one's attention but none of them rush to the forefront or retreat. Steady as it goes and there is no receding of flavors at the end of the bowl and no bitterness creeping in. Very pleasant from beginning to end.

Country Doctor is a bit more complex than most old OTC's with a variety of flavors. It isn't going to match the newer blends with all the flavors dancing in and out, or even Match Holiday with it s complexity. But, it is a more complex OTC with the flavors being pleasant and steady and can be smoked in any situation since it has a pleasant room note, can keep your attention if you desire to focus on the smoke or be a smoke you work, read or have discussions with for it wont draw your attention away from those things with a complex constant taste change. I enjoy Country Doctor and it is on my favorite list and will be part of my rotation. I give it a 3.5 out of 4 stars. Give it a try if you like a smoke with a variety of flavors in a consistent way.