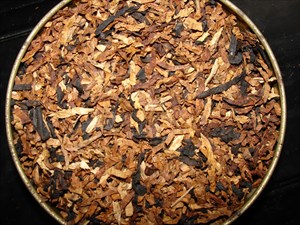 This is the blend that was made especially to commemorate our 100th Anniversary. A subtle mixture of Oriental leaf and latakia, plus a rich, matured Virginian.

Based on a 1 oz sample, this is a mostly brown with a smattering of black latakia. Bag note doesn't overemphasize any of the three components. Very small ribbon cut and it looks like I may have gotten the bottom of the barrel or the tobacco broke up a bit during shipment. No worries, as it didn't burn hot.

The balance in the bag aroma is mirrored in the flavor. None of the three tobaccos comes to the fore except on occasions. The Virginia is not of the sweet variety, but is more tangy and dry, with a more savory kind of flavor. Some sour notes as well, which is probably due to the combination of tobaccos. The orientals make their presence known and the latakia, while subtle, is obvious in each puff. Again, balance is the buzzword for this blend. If you're a latakia hound, Peretti and other blenders have blends for that. If you like huge oriental spice, look elsewhere. And if you like your Virginias sweet, you won't find them here. Complexity? A bit, but not enough to satisfy that craving. This one is for smokers who like the taste of all three components and desire a perfect merger where the three show their strengths in equal measure. A fine smoke, and my only issue is that even though this one has its niche in the realm of Peretti tobaccos, if you don't limit yourself to that blender, you'll find a small continent of similar blends. Not much in the way of distinction with this one, especially in a crowded field. Still, this is a good blend with a lot going for it, and I'm glad I sampled it.

The tin note of Century has a good amount of smokiness for the Latakia, some earthy floral aroma from the Oriental. This doesn't seem to have that Peretti "menthol" topping most blends seem to have.

The Oriental seems to be cut slightly different, as these chunks appear larger than the Virginia or Latakia. But not enough to hamper the lighting or packing.

This isn't half bad. The right amount of smokiness from the Latakia, the Oriental offers slightly spiced floral notes, and the Virginia brings toasty, sweet and bready notes to balance this blend out. I would say the Orientals are the most forward leaf of them all, but not enough to overpower the remaining components. As the bowl burns on, the spice increases, the sweetness goes by the wayside. Not particularly complex, but no so boring you become uninterested. This blend isn't a hall of fame tobacco, just another decent middle of the road blend. Definitely not worth the 4.75 an oz, there are better English blends to be had. 2.5 stars

Century is NOT your ordinary English blend. The "usual suspects" are there...Virginia, Latakia, and Turkish...but not in the ordinary proportions or types. For that, one should smoke Peretti's British Blend or the Royal.

While it is true that Century can be puffed into the "hot" zone, this caution is attributable to the Turkish component, not to the Virginia. Any domestic weed is far in the background. The Turkish comes to the fore at once and stays there. The matured Virginia is there to add sweetness...sometimes.

The first bowl of Century I smoked was in a small Sasieni "Ashford" shape, a quarter-bent author. The second was in a Comoy's "Blue Riband" billiard. The third was in a 1940's-vintage GBD apple. As they say, the third time is the charm.

Century is a marvelous smoke for those who appreciate variety, spice, and subtlety in a tobacco; one might, however, have to experiment to find it; Sasienis do not do this wonderful blend justice, and an old Comoy's does little more. An Algerian briar GBD, conversely, allows it to sing.

There is only ONE blend I would compare with Peretti's Century Blend...and that is Friedman & Pease's "Kismet," which is no longer available. The primary difference is that Kismet used SYRIAN Latakia, while Century incorporates Cyprian.

That makes a world of difference. For those who never tasted Kismet, it was a less-nuanced version of Greg Pease's "Bohemian Scandal." Syrian Latakia is less smoky than Cyprian, contains MUCH more nicotine, and has a winey, sweeter taste that mixes well with the Turkish used in Kismet, Bohemian Scandal...and (probably) Century. Also, if one ever smoked P & W's "High Hat" with Syrian Latakia...it was as stout a smoke as I ever had and was able to tolerate--simply because it was delicious. The same mixture with Cyprian Latakia is just another American English, albeit a good one.

Happily, Peretti's Century is NOT just another blend. It is smooth, bite-free, and delicious. Highest accolades!

This is a bit of a thicker cut ribbon comprised of medium brown a very, very few black bits. Smells like virginia, earth, a bit of spice and slight hint of latakia.

The turkish/orientals take center stage on this one. There is a lot of buttery spice and earthy leather components that merge well into the slightly sweet and slightly tangy va's. The latakia is barely present and adds some spice and smokiness that seems to smooth the smoke out. It has more of a N hit than the other Peretti English blends I've sampled (This is 3 of 4). It's very 'dry' on the sweet scale and is more spicy than the others. It has a few rough edges, but is still a good smoke. Reminds me of chelsea morning, but not as sweet and a bit more bitey and less latakia.

Very nice light English blend. Tin note is mostly VA and Oriental with a hint of smokey Latakia in the background.

The flavor is very straight forward: VA and Oriental blend well to provide a sweet and lightly spicy smoke. Peretti uses top grade tobacco and all of the blends I tried come at the perfect moisture level. The VA is slightly grassy and mildly sweet with a hint of citrus. The spicy and slightly woody Orientals slightly outpace the VA's, but it is really a unified flavor profile that works very well. The Latakia is very hard to detect in the smoke, it may augment the sweetness and the smokey flavor occasional makes itself known.

An excellent English balkan blend. The other reviews on this page say it much better than I can. But let me emphasize, it's a very nice medium English-latakia blend. The latakia is wonderfully balanced and is neither a whiff or predominant. The virginias are just as balanced. Smooth, interesting and satisfying. Nice room note too. Solid quality.

The sample I received of this blend was from a friend that bought it at the Chicago show. This tobacco is absolutely as basic and true to form as it gets. So why the high rating? It is perfectly balanced. The blend has a significant amount of nice VA tobacco and the Oriental is very nice. All of the tobacco is of the highest quality. The room note is as expected not wife friendly. This blend smokes cool enough though that taking it out doors is not a problem. If you like the traditional English blends you are going to love this one!!!

A straight and very classic English mixture, don't look here to find variations from the tradition. At sight the blend is dominated by the pale leaf of Virginias and turkish tobaccos, with some flash of black latakia here and there, but don't let the appearance fool you: the latakia is not mere colour here. Nevertheless the mixture is dominated by Virginias from the beginning to the end, with the classic VA sweetness well balanced by the oriental component which adds deepness and spice combined with a grat quality latakia. Nicotine wise it's not really strong, it can be an all-day smoke for the majority of smokers. Pay attention in puffing it slowly because it could become a little hot if rushed, due to the high VA content. Classy.

I tried this at the Pipe Show last week and was impressed. A nice medium bodied English where the Virginias are in the forefront. Latakia is very noticeable and the Orientals are in the background. It reminds me a lot of a an amped up My Mixture 965 by Dunhill. A good solid smoke. It nips a little though about one third of the way through the bowl. Try it if you like 965.