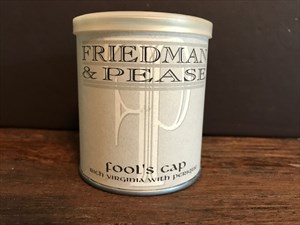 Fool's Cap is a blend of several varieties of Red, Lemon and Dark Stoved Virginias, artfully combined with just enough unflavored Black Steamed Cavendish for a subtle sweetness. The finest St. James Parish Perique provides a piquant spice and fullness of body. Fool's Cap is a rich tobacco of medium strength, with a pleasing room aroma to delight and amuse the senses.

My tin was a 2 oz job that was about 12 years old, purchased from the esteemed Pipestud, who reviewed it below.

This was dull brown in color and I'm betting that Cornell & Diehl produced it from an F&P recipe because the cut looks like garden mulch. The virginia is way to the forefront here and the Cavendish does indeed add body. The perique was mostly in the tin nose, and the blend had an aroma similar to Haddo's but much fainter. The smoke was definitely on the bland side, with some kind of topping throwing off the focus. The virginia, classified as lemon, did not possess its own sweetness, and the whole shebang had the mouthfeel of a cigar... and not one of the best ones. As with the Dunhill Ready Rubbed I just smoked, this one had little in the way of character. But it looks like one that would be fun to experiment with. I'm going to add some more perique and see if I can spice this one up rather than toss it.

GL Pease has produced some classic tobaccos. This ain't one of them, IMHO. The good news is this one is out of production and the classics are still around. Enjoy those and pass on this one.

The tin I opened recently was 17 years old, and its important to keep that in mind, especially since this blend is no longer made. Upon opening my tin, I was met with a fairly dense ribbon of tobacco, a mixture of light and medium brown ribbons, with a smidgeon of darker tobacco (likely the cavendish and perique). A mild fruity scent wafted from the tin. As I expected with a well aged Virginia, there was sweetness to the smoke, and the room note was quite pleasant. But the tobacco itself was not overly flavorful, though it is improved a bit as I continued to smoke thru my bowl. Ash was a mottled salt and pepper color. Overall, a bit disappointing. I was left thinking, is this all there is to it? I had higher hopes for a Virginia with this much age to it. After smoking several more bowls, my observations have not changed. Still a bit of a disappointment.

The red Virginia provides a mildly tangy, earthy, slightly fermented and “vinegary” dark fruit sweetness, and just stands out over the other Va.s. The dark stoved Virginia offers a little stewed fruit, sugar, earth, and light tang in a support role. The tart, citrusy lemon Virginia is in the background. The unsweetened black cavendish chips in with a little smoothing sugar. The spicy, raisiny perique is a condiment at its least, and rises slightly higher at other times. The strength is just short of the center of mild to medium, while the taste is at that threshold. The nic-hit is a shade past mild. No chance of bite or harshness. Burns cool and clean at a moderate pace with a slightly inconsistent, sweet and lightly spicy flavor. Leaves little dampness in the bowl, and requires an average number of relights. Has a pleasant after taste and room note, Can be an all day smoke, though its lack of depth places it at two and a half stars.

A very mild VaPer with added Cavendish for body. The Perique is the real deal but way off in the background. My tin of this no longer produced classic had 12-14 years of age to it which certainly mellowed this classic blend and there wasn't a hint of harshness or bite. I added 1/3 Five Brothers to most of the bowls of this F&P offering which added the strength I appreciate without interfering with the wonderful taste.

I bought 4 tins (100g) of this for $44 so it was a good bargain. My research tells me in was only made in 98/99, so if you find a tin it probably will be well aged. For me the Perq seems to have taken over the blend while aging, it has a strong vineger taste to it. The Cav is barely detectable. However is is quality and different. I've found it good for blending, adding some dept to boring blends. I've also has a great success turning it into a Scottish blend by adding some MacB's whiskey blend. If you like a vineger Va/per....you like it.

Tin Aroma: a mild and mellow virginia blend. The perique is less noticeable than I thought it would be.

Physical Characteristics: a light colored mixture, with the barest minimum of darker perique strewn throughout. A very short cut, which makes gravity-filling a pipe easy, even if I do occasionally get a stray piece of tobacco sucked through the stem.

Notes: On first light, the virginias, especially the lemon variety surge to the forefront. They provide the dominant flavors throughout the bowl, with the perique in a strictly supporting role as 'salt and pepper' here. The black cavendish helps to keep the blend on an even keel, and bite free, despite it being what I would consider medium strength, and full bodied. The various grades of virginias dance around one another throughout the smoke, providing a good amount of variation and suprise, inside of a framework of a solid virginia blend. The perique is a bit more noticeable towards the end of the bowl, but never overwhelming.

This tobacco is just too light for my taste . The Perique seems to fade into the background . It doesn't satisfy any of my basic smoking urges . I just can't think of anything to say about this one . Not memorable .