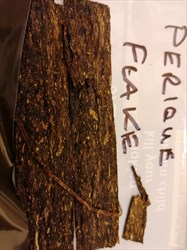 Unless new information is available, so far as I know, this tobacco is yet to be produced on a market scale. I had my sample from Gawith Hoggarth's sales representative Iain Hurst himself at the Nottingham Pipe Show celebrated in the Canal House this year. He would not share any info on what type of Virginia leaf or what ratios, I must say, but my guess is it contains a fair amount of bright virginia and about 10/15% perique. The taste profile got a nice tang to it that has been nicely paired with the spicy notes coming from the perique. Not a nicotine bomb by any stretch of the imagination, but its flake form and slow burning properties means it will leave you satisfied in the long run. I think it is important to mention Gawith Hogarth has already got a similar perique flake (Louisiana Perique Flake) in the market, but this one has got no casing in it. I understand this is to cater for that fraction of the market not so keen on Lakeland type tobaccos, which is something I have a soft spot for, but I am rather pleased with this presentation. I only hope it creates enough interest to mass produce it. Highly recommended.

It is not every day that you get to try a brand new blend from the renowned house of Gawith Hoggarth, and as soon as I saw that this new Va/Per flake had been released for public sale after the initial trials, I was very eager to try it. Like many traditional flakes, it derives its character solely from the tobaccos used, and the process, and has not been subjected to any flavourings or toppings or other fannying about. It came as a 50gm pouch of beautifully cut dark 6" flakes, (double the normal length of tinned tobacco). I cut them in half to make handling easier and it was obvious that there is some ageing happening here, with micro crystals of sugar sparkling in the layers of the flake . The aroma was incredible. A luscious mix of sweet fruity Virginia and a savory malty scent from the Perique and more than a passing hint of dark chocolate. I am not a fold and stuffer, so I rubbed one of these shorter flakes out and left it to dry for 2 hours, (Gawith blends come very moist ). I packed the bowl and settled down for what turned out to be a 50 minute smoke. The natural comparison to be made would be with Samuel Gawith St James Flake/Plug, which is more peppery and less bready and # 27 lights much easier, but has a tendency to rise up in the bowl to a larger degree, so a loose pack is advised to allow room for expansion. Initial flavour is mild and sweet with a good Perique hit, espescially on the retrohale. This flavour quickly intensifies to include the usual raisin and plum from the Perique and some brown sugar and bread from the stoved Virginias and settles to a very consistent flavour to the end of the bowl. It burns very slow and cool with no hint of bite even when pushed a little and needs a few relights, but I will try more drying time next bowl and that should help. I didn't want to over dry it and loose the essence of the obviously best quality tobaccos used. Room note is pleasant and sweet and typical of such a blend. Lately I have been smoking Charatan Black Flake (which I really enjoy) and it has almost the same aroma. Towards the end of the bowl, it had a tendency to clump and go out, but again, more drying time should fix that. All in all a very high quality tobacco blend which comes with the usual Gawith caveats (Don't smoke it wet, be patient and it will reward you greatly).

Update:- After smoking this almost exclusively for a week, it has been a very pleasant journey. Overall, St James Flake is still the one to beat, but I think this will age incredibly well and in some aspects (Coolness and easy lightability) it is ahead. I think in reality, it is a photo finish and I will certainly smoke this again and would buy it if St James was ever unavailable. They are of course close cousins and share the same DNA. All stocks of this seem to have sold out very quickly, so availability could be patchy until it becomes firmly established. I'm looking forward to trying some with more age on it.

I had the pleasure of trying this when it was in development, having been given a generous sample at the UK pipe show in 2019. I've since bought some now it's officially released, to see if there's any difference from the sample I had.

The aroma of the raw flake is rich, earthy, slightly sweet, with plenty of perique "pong". There's also some mature grassy aroma, like late in the summer after the heat. It comes a little moist, but dries out easily after rubbing to an ideal state for smoking. It lights easily, and the flavour is initially quite mild, nutty, and with a sweetness like demerera sugar or grasmere ginger bread. I took this to be a topping, and I suppose it could contain some sugar water but this is reportedly an unflavoured tobacco.

Through the bowl the flavour really develops and intensifies, with a spicy, tart, acidic flavour coming through and building into a really peppery effect - very nice! It may need some relights toward the end of the bowl, and leaves a little dottle, but not too much.

Overall, a simple but charming tobacco. Whatever you may think of the merger of the Gawiths (personally I'm pretty sad that the Kendal Brown House is no longer in use, and I've noticed a more "standardised" cut to the Samuel's flakes) this at least is a nice addition to the available selection.

This is an excellent smoke. I have been smoking this almost daily for a couple of weeks now and it is fast becoming my favorite 'daily' VaPer.

The mechanics of the flake deserve some special mention. The first thing you will notice is the sugary looking long dark flakes which have the perfect thickness for when you rub them out keeping the smoke cool throughout. They breakdown easily but I found myself cutting them in half which gives the perfect amount for most of my bowls. The smell is the astringent, vinegary scent rather than the fruity one associated with aged VaPers but there is a slightly musty (in a good way) undertone which to my palate, as limited as it is, makes this blend stand out from others.

I prefer my VaPers slightly dryer as that seems to agree with how I smoke and this one really delivers. The ratio allows this to be an all day smoke in the sense that it will deliver after a large dinner or with a morning coffee and not lose anything in terms of satisfaction. The notes are what you expect but again with an aged undertone which supports the spicy peppery flavour of the perique which is felt as much as tasted. I personally did not detect and have not detected the dreaded 'essence' attributed to lakeland produced blends regardless of an 'unscented' label a specific lakeland blend may have.

Purchased From: The Black Swan Shoppe

I take it that this tobacco from Gawith, Hoggarth & Co. is intended as a counterpart to Samuel Gawith's St James' Flake. My relatively unsubtle palate can't detect any difference between the two worth mentioning. This is a sturdy VaPer in which the usual Virginia characteristics - sweetness, grassiness - are complemented and enhanced by the spiciness/ plumminess/ fruitiness of the Perique. A very worthwhile and well-behaved flake. It needs a little drying time (though not too much, or you start to lose the flavours), after which it burns slowly and consistently and retains its definitive flavours all the way to the bottom of the bowl. Fold and stuff is best. If you take your time over preparation and filling, you won't need many relights. Smoke slowly, though, or you won't fully enjoy the nuances.

Gawith Hoggarth's other VaPer flake, Louisiana, is to my mind rather spoiled by the casing. Perique flake, by contrast, has no casing that I can detect. An excellent tobacco; highly recommended.