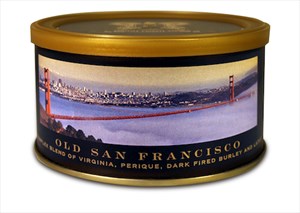 A medium English with no discernible topping. The dark fired burley is earthy and a little nutty, with a delightful cocoa flavor. The Cyprian latakia is not in full force, though it does offer a little smokey, woodsy depth. The Virginia acts as a slightly citrusy, grassy base for the other components. The perique is a minor player, being slightly plumy with a hint of pepper. The nic-hit is mild. Won't bite or get harsh. Leaves just a light dampness in the bowl and requires few relights. The interesting part of the mixture is that some of the flavors are occasionally subtle, and not present in every single puff, with the exception of the dark fired burley. Subtle or obvious, the variety of components burn cool and dry at a moderate pace to provide an all day American English smoking blend.

I received a healthy sample of this back in October and just recently finished it. It was kind of a weird type blend to me. I can honestly say when I lit it up and through the first quarter of the smoke I just did not like it at all, It just had kind of a weak off taste to me. Kind of a mix of strange chemical and hot air taste.

As I got into the middle third of the smoke it started to taste really good; delivering the flavors one would expect from an American English. Very earthy and nutty sweet with a decent amount of latakia smokiness. If the whole bowl tasted this good than this would be a four star blend to me, but it didn't. As I entered the last quarter of the bowl it kind of went to boring as if the flavors I was getting before had just disappeared and were replaced by a boring monotonous watered down version of what I was experiencing before. I don't think that Sutliff lists a topping on this blend, but what I experienced seemed to be indicative of a topped blend. I am putting extremely mild as flavoring merely on a hunch, but don't know for sure whether there is a topping.

It is odd and maybe it is just me, but I have not had this experience with other American English blends that I have smoked. On the objectivity of would I recommend this, I would say no, but what I tasted in the middle of this smoke was too good to warrant a single star review. However, I would also recommend Sutliffe's own Lord of the manor or their revelation match over this blend. But I did like it better than R Blend and Man's best friend.

Overall, I am leaving this with two stars and a somewhat recommended and probably will not reorder.

This is a pleasant smoky blend that seems to get a little sour at the end. Not my favorite to be sure. Smoking slowly seems to improve the blend.

There are two unusual things about this blend. Although I handle a lot of Sutliff Private Stock tins in the aftermarket, I have only seen Old San Francisco on two occasions in the last decade and, fortunately, there were two tins in my latest buy. The other item of note about this blend is the total absence of four star reviews, even though it has a high rating score in general. I had to know what this was all about and ripped open one on the tins in due course. The tin opening was uneventful with no pressure release nor any funny aromas. I knew immediately it was an English blend, almost certainly a Balkan blend and, yes, an American English blend too. The tin aroma was surprisingly stout and strong and turned out to be stronger than the smoking aroma. I picked up from the tin aroma a blend of dark-fired Burley, Perique, Virginia and Latakia in descending order. The smoking aroma was never, at any stage, quite as stout as the tin aroma. Smoking this blend, from the perspective of a seasoned English smoker, was kind of like a roller coaster ride; we went up, we went down and we even went sideways for a time. The sideways came in the top thirds where things were spicy but nebulous in taste and aroma. Old San Fran never bit, but was real tingly on the tongue up at the top of the bowl. Then, somewhere near the bottom of the top third, this abruptly stopped and we ascended to the land of four star performance. This pleasant interlude went down to a more normal English profile in the bottom third that trailed off to nothingness eventually. I liked Old San Fran and might keep the other tin in my private stash, but, I think I now know why there are no four star reviews and I am with reviewer TallPuffO'Burley 2015-07-15. We didn't care for the roller coaster ride - three stars.

Age When Smoked: unknown, but between 5 and 10 years old

Purchased From: a fellow pipe smoker

Similar Blends: I don't know, as this blend smokes inconsistently down the bowl..

This is a spicy, pungent (cedar wood, charred wood) and quite strong English blend with ample use of Latakia. I happened to be smoking Nightcap alongside it, and I have to say it's not that far from it. Not as complex, not as pungent, maybe even not as strong but quite close. It lacks the deep core of blackness that Nigtcap posses which reminds me of motor oil but it has a punch (perique is noticeable also) and additionally it has a mellow sweetness and and a beautiful burley nuttyness. It came rather dry, it needed a little bit of moistening for my taste, but even then it burned rather fast and I had some - not serious - tongue bite. The tin contains different cuts of tobacco, ribbons and broken flakes. Some flakes were rather long and made packing difficult. A rather good English blend.

The same little shop that sold me a particularly nasty bulk ounce of 4X4 Rugged also had a tin of Old San Francisco which almost made up for the 4X4 horror show. OSF is a light to medium English that was right up my alley since I really like a little topping (when done correctly) to ease the room note, OSF makes for a great morning pipe since the Latakia is lightly applied and the blend is light in Nicotine and will note have the MRS running for cover. Although not a traditional English since it contains Burley I don't think it is a major flavor and the Perique is also lightly applied and never gets too peppery or spicy. If you have been disappointed by Sutliff in the past, let them make it up to you with a bowl of OSF, a really pleasant Mild English that has a nice room note and some good flavors making it a no brainer for the morning or an all day light English.

There is something really refreshing about a tobacco that can be packed right out of a fresh tin, and taste great young as well. This is one of those tobaccos. A nice ribbon cut tobacco that is dry and perfect for smoking right out of the tin. There do tend to be some larger chunks and even some stems so sift accordingly.

The tin note is very smokey but from both worlds. The campfire smoke of the Latakia and the braised pork of the Dark Fired Burley.

The first quarter of this I get a lot of Dark Fired and some Va. Latakia is very faint and the perqiue is almost undetectable. Slowly passing the halfway point the sweetness of the VA and Dark Fired slowly begin to fade and the Latakia seems to take the front stage. The Perique is slighly more involved than the first half but really is a condiment in this blend. I have a sneaking suspicion that this is green river burley that has been processed as perique. Regardless this tobacco burns very evenly and smokes cool.

Random notes: Despite being a complex blend, I found that a smaller, conical bowl was the best for me. A dublin shape goes really well with it in my experience. I didn't enjoy this in my morta pipes at all and found it really shined in my briars. Well done Sutliff.

There is a good bit of sweetness and spice out front. The sweetness from the Virginias, the spice from a combination of the other three components. I taste the Virginias most prominently followed by the Kentucky. The Perique and Latakia are faintly detected in the background. It's a nice flavorful smoke that might serve as an introduction to Latakia for the uninitiated. I find it a very pleasant smoke.

Mild to medium in body. Medium in flavor. Burns perfectly.

A pleasing mixture of blonde thru to black tobaccos. Mostly a short ribbon with the occasional larger piece that looks like broken flake. The tin aroma is dominated by a soft turpentine aroma of Latakia. There is also some sweet caramel on the nose.

I found I could pack this baccy fairly tightly without it rising out of the bowl on the first light. Once lit this is a trouble free blend.

As the smoke goes, it is a light American English with no orientals apart from the Latakia. Interestingly, there is a fair presence of Perique in this blend, and the relationship between Lat and the Perique is in my view what defines Old San Francisco. Unsurprisingly, Latakia is the foremost note from the start. It is supported by some gentle, sweet, Va which also contributes some lemon zest from time to time. As the bowl progresses the Lat is overtaken by the Perique with its plum and pepper presence building steadily. The DFK is at best a background presence imo.

A very well balanced tobacco with a pleasing transition as the bowl progresses, it is interesting without being complex or heavy. Quiet without being studious. Very nice with a sweet dark coffee, in the garden, listening to the birds.