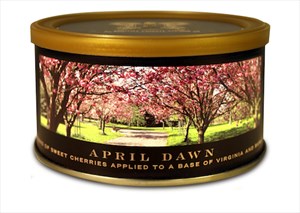 The cherry aroma is strong when you open the tin, but it’s less so when you smoke it. It tastes a little like a milder Spinnaker, but the tobacco is much dryer here. I don’t really taste the nutty burley much, though it’ll pop up a little if you completely dry this out. The grassy, citrusy Virginia is a little noticeable, more so if dried out. After the half way point, it is minutely syrupy at times, but not annoyingly so. Unlike some cherry blends, it doesn’t turn harsh as you get near the end. Basically, it’s a medium tasting blend that leaves a pleasant after taste, has a nice room note, and burns pretty decently, though there’s a very slight bit of moisture at the finish. Needs few relights. Has little nicotine and won’t bite or get harsh. An all day smoke.

I like aromatics, but I guess I hate cherry flavoring.

To this date this was the least favorite thing I've smoked (not counting a few cheap gas station buys) and it now lives in the garage as an Emergency smoke, though to this date I still haven't found an urgent reason to revisit it.

It is light to the touch and burns quickly. The real coffin nail is the sickly cherry flavoring which is reminiscent of cheap Walgreens cherry filled chocolates or cough syrup.

It actually gave me a headache. The room smelled of cigarettes afterwards. Avoid this one.

Going to have to agree with a lot of what Jiminks said. Don't let the tin note scare you off it's actually a very mild cherry blend when smoked. I had to dry mine out for a bit before I put it into the bowl. Smoked a little hot without the dry time. The flavor is pretty mild despite the smell at first. Builds up towards the end of the bowl but is medium at its strongest point.

I personally don't go for too many fruity blends but this was probably the best cherry that I've ever had. If you're looking for more cherry pow to your pipe I would recommend Hobbit's Weed.

I was given a tin of this. That's the only reason that I would end up with a cherry-flavored tobacco. One hot, summer day, as I worked in the yard and the garage, I popped it open b/c what the heck.

It's light... beyond light. It smokes easily and doesn't bite. It has a very mild and pleasing room note and - the biggest surprise by far - leaves practically ZERO lingering scent. I've smoked this several times since in my car specifically because there is no lingering smoke smell in my car the next day. It's very strange to me and I'm not sure how it's possible, but - for that reason alone - it's almost worth buying a tin of cherry tobacco.

Tin note is up there but not overpowering, mine came a bit wet but left it open overnight and it smoked well. The cherry smell was a bit syrupy but once lit it's subdued, instead of a candy/cough syrup type taste I get a cherry blossom or cherry floral type. It's really light enjoyable smoke and keeps cool and billows very well, a necessity on the golf course!

At first this was too wet out of the tin, but drying didn't help. Flavor was weak to begin with and faded swiftly. The tobacco is not bad (no off tastes or anything wrong), and simply qualifies as "it's a smoke" and a very mild one at that.