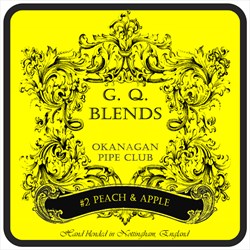 A rich aroma of musky apples with a sweet, ripe twang of peaches. The tobacco is silky smooth to smoke, with a highly aromatic room note, not what you would expect for a latakia blend.

Notes: Erin from the Okanagan Pipe club contacted us and asked if we could make couple of “Club Blends” for them. A Balkan and an aromatic was the brief and over several weeks we experimented with various ideas. The Aromatic, much to our pleasure was to contain latakia and almost perique, too (one day we might revisit that idea). Peach & Apple was specified for the topping and we looked about for the right flavours. The 2013 Christmas Blend and our Rum & Honey are both built on a solid foundation of strong, spicy Virginias. While these tobaccos may be heading towards the stronger end of the Virginia spectrum, they burn slow, smooth and above all else cool. When mixed with “American style” black cavendish, from mild white cube burley, that has been steamed and sweetened. This adds a wonderful creamy texture to the smoke and again keeps the blend cool. When latakia combined with this style of black cavendish adds an even thicker and silky texture to the smoke and of course the trade mark “smoky” flavours too. A gold, fluffy cut Virginia is then added to not only allow the tobacco to burn more freely, but also soak up some of flavourings. Natural extracts of apple and peach are added along with a little, almost undetectable dash of cinnamon for good measures. The resulting tobacco has a rich aroma of musky apples with a sweet, ripe twang of peaches. To smoke the tobacco is silky smooth to smoke, with a highly aromatic room note, not what you would expect for a latakia blend. Had this blend not been made for the Okanagan Pipe & Cigar club, this would have been an addition to the GQ Blends Aromatic Latakia Series. Released in May 2014

The smell from the pouch is like a perfumey Balkan. Of the different tobaccos it's the Latakia that comes through the strongest in the unlit smell. The moisture amount is great and this makes for easy lighting and once lit it tastes 'different' to other things I have smoked!

Like the unlit aroma it's like a perfumed Balkan. The Latakia is the most formidable of the tobacco flavours. The Black Cavendish really softens the taste and cools down the smoke. The additives aren't as strong as I expected them to be in the flavour. They are perfectly noticeable but not too strong. I find the most difficult taste to acknowledge is the cinnamon, possibly as it's quite a full flavour. Next to that in the line of difficulty is the Virginia, again as Virginia is a fairly subtle taste it seems to struggle cutting through. I find the N is at a medium amount in this. Satisfying but it doesn't churn my stomach!

This is a unique blend but that's worth a try! Three stars.