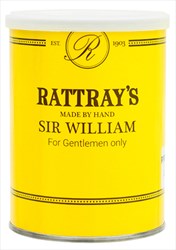 Notes: Sir William is a ready rubbed loose cut. The main ingredients are various selected Virginias, which are responsible for the round taste. Fired Kentucky, cured Indian and aromatic Thailand burley are then added, and topped by a light whiskey flavor. But in the end only requires one word to describe this blend aptly: a record! -edited quote from HU-Tobacco.

Very small ribbons - small in both length and girth, with a tin aroma of... coconut? Or something along those lines. I guess it could be construed as a booze topping, which is what it actually is, but it smells more coconutty to me. Underneath the topping is a rich, deep tobacco scent.

This is billed as predominately Virginia but it smokes more like a burley-in-front blend, with the Kentucky and Virginia alternating in the shotgun position. The flavoring is evident in each puff and tastes more like booze than it smelled but it's sweeter than any whiskey I've ever tasted, including bourbon (which, as a scotch aficionado I find too sweet to drink). The sweetness here isn't over the top at all, but instead lends a nice balance to the dry earthiness of the tobacco. This is a well done aromatic that skirts the line between aro and non without going to far afield into the sauce realm. More of a Euro-aro, which makes sense, of course. The flavor in the top half of the bowl is sweet without being sickening and melds well with the tobacco. Unfortunately things go south in the last half - or really the last third. The flavoring becomes more faint and the tobacco takes over. Sadly the tobacco doesn't taste quite up to par. It gets a bit rambunctious and over-dry with a too quick finish. Not harsh but a little bitter. This might age well but my new tin was too youthful and reminded me of the green stuff coming out of a formerly well received but now less than ordinary U.S blending house (which shall remain nameless). Two and a half stars upgraded to three, not because it deserves three but because this has the potential to be a three star blend. I smoked two of the four oz in the tin and I'm going to let the other two sit for awhile, and then revisit this review.

I am surprised that there are no other reviews yet of this blend. This is a first impressions review.

Cracking open the the tin, reveals an almost cloyingly sweet aroma of an excessive flavoring, and I anticipate a hot, biting aromatic. The ribbon cut is loose and almost the perfect dryness for immediately loading into my Patriot cob.

Upon lighting, the sweetness prevails but quickly recedes from it's dominance. Despite the tin stating that VAs are the main component, to me the blend smokes as though it is a Kentucky/burley blend with VAs detectable only in the background.

With every puff, where I expect bite to arise, it never does. Instead of a single dominant component, there is a striated experience of Kentucky, burley, VA and the whiskey all at once. As the bowl goes on, this develops into a rhythm of Kentucky followed by burley followed by a slightly sweet endnote. The room note is quite pleasant due to the flavoring. It does not taste like a whiskey flavoring per se (what whiskey is that sweet?), but it admittedly plays well off of the other components.

Halfway into the bowl, I think this is very pleasant but perhaps not outstanding - there is no drama here. But further into the bowl, puffing away, I suddenly realize that the nicotine level has snuck up on me and yet there is a subtle deliciousness that keeps me from slowing down. (Considering that I am used to blends like GH Dark Flake and 1792, I'm a bit surprised at its strength.) Warm, toasty, friendly and inviting with that slight sweetness at the end of each puff, I finish the bowl feeling quite satisfied and yet still wanting more.

Rattray marks the tin as: Flavoring 2/5, Strength 4/5 and Room note 3/5. I daresay they are spot on. This is a quite enjoyable blend, and if I had any complaints it would be that the ribbon cut allows it to burn a bit too fast to enjoy at a slower pace. With some age on it, I think this will be quite impressive. All in all, a very delightful and tasty blend.

Edit 1/2/2015: This continues to be a great blend after many bowls. Very satisfying combination of flavor and strength.

The first thing I noticed, and also felt a bit perplexed by, was the tin-note: there's only a hint of whisky, the majority of the smell is like nougat; strange!

The mixture's dark brown in colour and has a spot on moisture quantity. The best way to describe the build, rather than just using the catchall term 'Ready Rubbed', I think is 'fairly delicate ribbons'; not chunky, or broken flake like, but well rubbed out.

The smoke? I quite like the taste of this; I find the Burley/Kentucky flavour to be more prominent than the Virginia's are, with the Oriental/Turkish falling midway between the two. The actual tobacco flavour's rather full and fairly well rounded.

I don't get a great deal of topping (unlike the tin-note); and in the smoke there's far less sweetness and more whisky, albeit not too heavy.

One of the lower points for me is the heat of the smoke; it's generated by a very consistent and even burn, but it's just too warm for me; this always abates my rating.

The room-note's okay: it's not bad, not good, not heavy, and not light; I'm indifferent to it.

The unburnt tobacco's aroma isn't reminding of Whiskey AT ALL...it's hard to pin-point to be quite honest, but I've read someone mentioning "something along the lines of Coconut" and this comes as close as you might get. Yet the flavorings seems mildly applied and also in smoke I wouldn't identify as an "Aromatic" per se. It's somewhere along the lines of Petersons 3P's or ST. Bruno, which I consider "semi-aromatics", where the tobacco has enough room to play.

The flake is rubbed out very finely and almost ribbon-ish, and therefor easy to handle, pack and light. In the pipe the flavoring again isn't too whiskey-ish, but more floral and somewhat "exotic" (think pina colada maybe). Yet I'll grant it a mild malty quality that might remind of Whiskey. The main attraction are the tobaccos in here, which harmonize very well with the flavoring. Slightly smoky, pleasantly spicy and earthy, with only minor sweetness to it. They harmonize vrey well with the described flavoring aroma and are more present than the flavoring is.

Not too shaby I'd have to admit! It's totally NOT what I was expecting... but it's an OK smoke, that I enjoyed smoking and of which I can easily see people having pleasure with this blend. So 2,5 stars, more of a 3 stars tendency, as I'd "recommend" this.

StevieB sent me this as part of a trade. I like it a little better than he did. Thanks for this one Steve.

Led by the Kentucky and Burley with the Virginias picking up the rear. It's earthy and nutty with hints of smoke and fruit. The topping is a very mild whisky and, I think, a touch of sugar. The overall flavor is very nice. It does burn just a little warm, possibly due to the sugar. The good news is that it maintains it's flavor perfectly so a little extra warmth doesn't bother me too much. All in all a very nice smoke.

Purchased From: acquired in trade (Thanks Steve)

Cracked open this yellow beer can and was greeted with a soft cocoa aroma sprinkled over a light leather oil mix, which sort of morphed into a sweet caramel Whiskey topping. Nothing overly sprayed, sticky, or overtly Aromatic here, just a natural pile of tobaccos with some sugar.

The medium brown ready rub, left little to rub out (just a springy ribbon cut here), packed tightly, and fired up with ease. The initial puff has a decent nicotine hit without being overpowering the now dialed back flavor, making for a mild Aromatic without much froo froo and some Whiskey residue in tow.

For me, it was a miss, as I generally like more candy in my Aromatics, but for those of you whom appreciate the taste of Burley (the Virginia and Oriental are way in the rear), give this one a try.

SIR WILLIAM: Particular, a special one. A robust and satisfying mixture. There is not only whisky in this blend, but much more. I mean there is some sweet casing and this is without any doubt a flavored blend. Anyway not a strong but a mild flavoring. Above all this mixture has the great virtue of being able to please both lovers of aromatic blends and lovers of natural tobacco. It is strong enough and you never get tired of it. A pleasant surprise. Give it a try! In my personal rating system (from 1 to 10) my score is 8 and three complete stars.