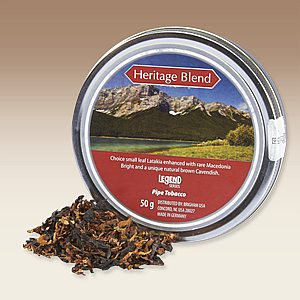 I was given a variety of the Brigham tobaccos to review by the USA rep, and Heritage was one of them. No question but that the bulls-eye was hit when Brigham's blenders patterned this one after the legendary Dunhill 965. The combination of the Cavendish, Brown Virginia leaf and the Latakia was nicely done. Not as strong or full flavored as 965, but a very nice replica that should get better as the aging process continues. I put a few tins in the "cellar" for future enjoyment.

Heritage Blend is modeled after Dunhill’s My Mixture 965. In fact, it’s an American rebranding of Brigham’s Mr. B’s D-series, “The Mixture,” which was introduced in Canada to satisfy 965 smokers, when Dunhill’s was no longer available. But, as I hadn’t smoked 965, “back in the day,” I have no reference point, so that my experience is based only on the tobacco in the tin. The tin was given to me, in 2013, by Brian Levine, the Pipes Magazine Radio Show host, who said it had been in storage at Brigham’s for two years, before being released. The tin aroma is of a classic English mixture, leather and spice. The ingredients are the same as Dunhill’s original. The moisture content, after three years of cellaring, was just enough to pinch it together, but not damp. Those who like a drier fill should let it rest for an hour before loading. The flavor is wonderful; balanced, smooth, yet complex and mouth-filling. The Latakia, which is prominent, but never overpowering, has married nicely with the tangy Macedonian and the nutty brown Cavendish. No bite, no goopy dottle, just the tang of good tobacco, a smile of satisfaction, and some powdery white ash, at the end of a pleasant smoke. This is an excellent mixture in the classic English style.

Apart from one big twig it comprises medium ribbons, and is about 25-75% between dark and light in colour. The moistness of my tin looked perfect when I first opened it.

In the lead position we have the foolhardy Latakia, giving smokiness, woodiness, and cooling the smoke. I wouldn't call it a Lat-Bomb, it's nowhere near caustic enough, and smoother tasting than a L.B., but the Latakia is without doubt the dominant taste. After the Lat' comes the Cavendish, and the sweet note from this makes the flavour ultimately smooth. The burn from Heritage is impeccable in both speed and consistency: slow, and cool.

A very nice English. A solid example of the genre. The Lat leads with smoke, wood and spice. The Brown Cav adds a nice sweet nuttiness. I confess to having trouble picking up the Macedonian. I think some of the spice may be from it, but the rest seems lost in the Lat. Regardless, it's a very pleasant smoke. Smooth and lacking the acrid note that many Lat blends can have.

I've worked through half a dozen 50g tins of this fine mixture lately, needing a replacement for 965, which seems to be disappearing again. It really is very close, a bit brighter and moister, but nothing that cellaring wouldn't correct. A cool smoke, with no tendency to bite, easy to light and keep lit. Very dry ash and no gurgling from the pipe. Very pleased to have found it!

Edit: I've mentioned this in my review of Brigham's Nightcap clone, Aurora Borealis. I'm not normally a fan of messing with the careful blending done by someone with a great deal more experience than I have - the old adage about mixing apple pie and cow pie comes to mind: you don't improve the cow pie and you ruin the apple pie. But, here I have found something that is wonderfully good - mix half and half Aurora Borealis and Heritage, and you get a sweet, mild smoke with flavours that aren't apparent in either of the parents. For example, I get a noticeable grassy hay taste rather like Gold Block It's well worth trying in my view and I'll likely continue to consume them mixed together.