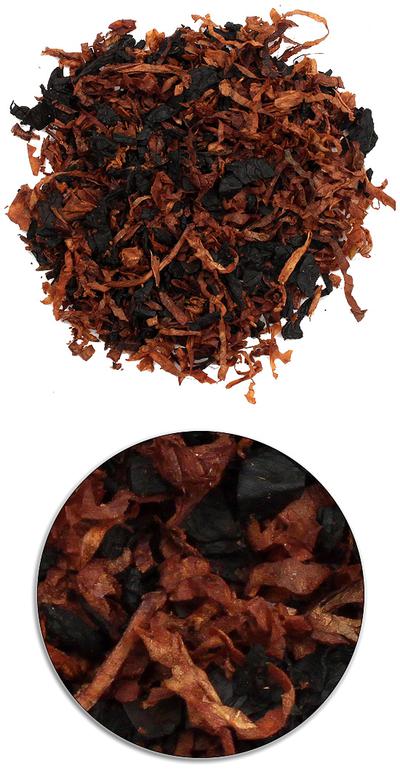 Very satisfying with a mellow, nutty flavor, this medium mixture is based on McClelland's fully rubbed Burley Virginia Cake Cavendish, and is seasoned with black ribbon, lemon Virginia and a small amount of Xanthi. The orange liqueur top note combines well with this blend to produce a fine smoke with truly refined aroma both in the pouch and in the room.

This is a pretty good aromatic from McClelland and really the first aro produced by them that I have enjoyed at all. I was excited to try this one as I am a fan of the cordial that flavors it. Not as much as my brother who pretty much takes a glass after every meal and is the responsible party for introducing myself to it.

The liquer is an orange flavor and does hit the spot following dinner. The same flavor does translate over well to this tobacco and holds pretty well through to the bottom of the bowl. I did not realize their was any oriental leaf in the blend when smoking it, but it must have helped adds some earthiness to this one as it did seem to have a nice bit of body to the smoke.

Otherwise, leaf indication is not really easy with this as the topping is pretty heavy. As with most aros, if you like the topping, you will enjoy the smoke. I did enjoy it myself and recommend to those who enjoy Grand Marnier.

Although not my ideal type of blend, it's quite a good smoke.

It has a smooth aromatic flavour, instead of an over-citrus orange flavoured one. The topping seems more fervent at the beginning of a bowl, until about a third has been smoked. As well as giving little 'citrus' attributes (more actual orange than citrus piquancy) the liquor has more sweetness than alcoholic sharpness. Although not heavily added, the topping has a slight stickiness to it. Of the tobaccos I get a lot more Cavendish than the others. #720 has a slower burn, but the moistness is partly responsible: it arrives a little 'tacky' to the touch. The smoke doesn't bite, and is quite cool.

A well made blend, but I wouldn't add it to my rotation. Somewhat recommended:

McClelland's Grand Marnier presents as a ribbon of medium Browns with distinctive chunks of black Cavendish. Jar note is sweet and toasty, indistinct within this class of tobacco. Similarly, the charring and true lights bring the traditional Cavendish-based aromatic's flavors of vanilla, marshmallow, light cacao and caramel. I detect nothing at all in the way of Grand Marnier flavor beyond the slightest hint of zest in the background.

Where this blend does distinguish itself, however, is in the dryness of the smoke. While not exactly cool-smoking, #720 is certainly an aromatic intentionally blended to avoid the "goop", heat and damp so common among contemporary aromatics. By mid-bowl I get more toasty marshmallow than citrus or alcohol. But sipped slowly, there's tobacco flavor here. A bit too sharp for me, thin in mouth-feel and lacking in body, this blend might be a good crossover for those aromatic smokers looking to break out of the typical, wet, black Cavendish intensive, American aro section. The finish is acrid and ashy, though relatively dry.

Smoke this slowly on a cob and you'll get some decent flavor that smokes relatively dry for its class. While sharp and thin, one I would reach for over the vanilla goop aros that have become more lately popular.

I picked up some Gran Marnier when McC was going out of business.

I opened up the jar which I had put away in 2018 and found that it is still quite moist. The jar note has some orange but not overpowering. The tobacco is mostly dark (black cav) with some lighter strains included.

It packs easily and takes a couple of lights to get going. The early part of the smoke has a citrus background with some top sweetness. Not a lot of tobacco behind it. As it burns down, the citrus goes away and its pretty mundane. It burns down to a good ash.

not something that I'd buy again (even if I could) but it has been an enjoyable smoke.

I like aromatics and this one is excellent. I bought it at a Brick & Mortar without knowing the individual tobacco components but I could tell immediately that there was something about it that distinguished it from most aromatics, which seem to share common characteristics. I suspect it is the addition of the Oriental tobacco. The orange liqueur flavor remains consistent throughout the bowl, it burns cool, and completely to a fine ash without excessive moisture. This is one aromatic that I want to always have on hand.

Purchased From: The Corona Smoke Shop of Michigan (Jackson Store)

Comment = Smooth, Mild, Mellow, actually has an orange Flavor, just a hint of After Taste on finish

The little blurb from tobaccomkt.com says: "Very satisfying with a mellow, nutty flavor, this medium mixture is based on our fully rubbed Burley Virginia Cake Cavendish [what the heck does THAT mean] and is seasoned with black lemon, lemon Virginia and a small amount of Xanthi. The orange liqueur top note combines well with this blend to produce a fine smoke with a truly refined aroma both in the pouch and the room."

The product consists of wide, short ribbons of black cavendish (~50%), about 30% reddish-brown virginia that was once a flake (tiny flakes in the sample) rubbed out into ribbons, a smattering of bright virginia, and the rest is probably burley. The cut on all ribbons is shortish, so it is easy to pack. #750 is also very sticky but not especially goopy. The moisture content is not all that great considering the manufacturer, though a little drying out is in order.

There is not that vinegary aroma often associated with McClellands blends. (It seems to me that this is confined largely to their tinned blends, esp. virginias.) There is also almost no pouch aroma, definitely no blast of that favored orange liquor. What little nose there is is slightly sour, like many unflavored black cavs.

The taste is also dominated by black cavendish, at least initially. it IS sweet, but no surprise given the stickiness. Also burns a bit steamy, so some more drying out is in order. As the bowl progresses, a nuttiness comes to the fore, and the sweetness increases. Towards the bottom, the sweetness deepens and a slight bitterness develops. A significant dottle remains, which is steamy and flat if relit. My tongue also feels a bit abused.

My overall impression is sweet black cavendish, a tobacco experience that I seem to enjoy less and less as time passes. I do not know, maybe I got a batch that missed the Grand Marnier topping, but this has NO orange flavor, not much flavor of any kind. One dimensional may even be too generous. This, as well as other McC. aromatics, makes me think that McC. does not do aromatics very well.

I will try again after the product has died, er, dried (Freudian slip) and had a few months of aging. I am not keeping my hopes up though.

False advertising. I detect absolutely no Grand Marnier in this blend whatsoever. There is something, but certainly no orange casing/topping.

On the other hand, it smokes cool, never any hints of biting. Burns clean if it is the right RH.

I give it two stars, only because it is quality tobacco. Minus two for false advertising.

It´s a good tobacco for smoke every day. No bite the tongue but it´s too much humidity in my opinion.

This is one of those 'ok' aromatics. The pouch smell is pleasant enough as is the room note. But the taste isn't anything that's made me want to spend a lot of time with. I was intrigued with the use of Grand Marnier as a topping but it just doesn't carry through to smoke flavor. Not one of my regulars.

As over the top aromatics go this one is fairly decent. If you are o.k. with aromatics give it a try. A 2 to 3 star in its' class.