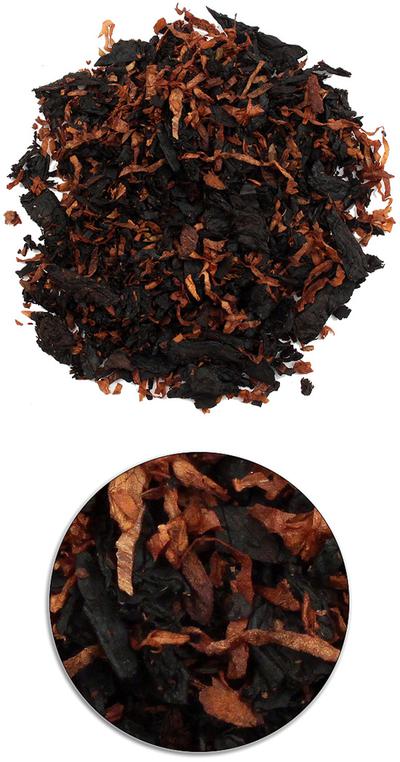 A rich, fragrant blend of Special Black and the highest grades of Virginias and Carolinas, seasoned with a hint of Oriental and Burley-Virginia Cake Cavendish. Topped with a delicate honey-nut aroma that reminds us of Greek Baklava.

The lightly sugary, toasty black cavendish is a major player. The various Virginias and Carolinas offer some grass and citrus, and a little earth, bread and dark fruit in strong support roles. The nutty, earthy burley, and woody, dry, slightly spicy Oriental are background players with the burley being the more obvious of the two. I hardly notice the Oriental. The honey nut topping mildly tones down the tobaccos, and doesn’t have a lot of depth. Doesn’t taste much like baklava. The taste almost reaches the center of mild to medium. The nic-hit is very mild. Won’t bite or get harsh. Burns cool and clean at a reasonable pace with moderately sweet, very smooth flavor. Leaves little moisture in the bowl, and needs an average number of relights. Has a short lived, pleasant after taste. An all day, undemanding work and play smoke. Two and a half stars.

As you can see from the picture, it isn't too coarse a broken flake. Apart from a few pieces it's pretty much a straight ribbon. Black Cavendish accounts for the majority. Moisture's good.

Sweet nuts: this is how the smoke tastes. There's a fair amount of added flavouring so this leads the smoke. Any Oriental flavour avoids me, but I get a notable Burley taste. Other than that, the smoke's mainly comprised of Cavendish and Virginia flavours: the Virginia flavour's sort of bready/doughy. The burn from it's good, being cool, even, and reliable.

I get this one, I really do. I enjoy aromatics and pressed virginia flakes also. I guess I'm on an aromatic kick again. This blend of reds black and brights is towards the flat side but never really gets that flat. Sipped slowly I taste the tobacco and the sweet nutty Baklava flavouring. Lights easy, burns well and the room note is not sickly sweet but like warm honey roated pecans and walnuts. I like this and everytime I try a McClelland blend I am very impressed by their work.

I'll start by saying I like aromatics. This is an aromatic that I did not find goopy at all. It has a nice flavor and excellent room note. I smoked it fairly fast on a short lunch break today and had no tongue bite whatsoever. This is a blend that I will get some more of for sure and will take a bit more time with it later on.

No strong aftertaste and none of the 'waxy mouth' that cheaper aromatics give off.

This is the third McClelland bulk aromatic I've tried, and it is very similar to the other two. The only real difference is the substitution of honey for their flavors. Because of this, I'll keep this review short; read #705 or #105 for more details in general. The tobacco's smell is strongly sweet, an aroma of honey and nuts masking any natural smell. It is totally black, a soft, moist blend of short to medium blend that packs easily. It lights well, and burns with roughly the average number of relights needed per bowl. In the first third of the bowl, the flavor is sweet and fairly strong with honey; I really don't detect much of a nutty flavor. As with #105 and #705, the smoke is very mild, thick, and totally bite-free. It is also likewise one-dimensional, but not too boring regardless. In the second part of the bowl, some of the casing burns off, though it is still pretty strong. There is no problem with moisture or bite, but I can't sense any of the underlying tobacco, beyond the occasional mild taste. In the final third, the flavor remains smooth and honeyish, a rather uncomplicated aromatic tobacco. There is some moisture in the bottom, though it isn't excessive. Overall, this is nearly identical to #105 and #705, with a honeylike flavor being the main taste component. A nice, light change of pace with a smoothness that makes smoking a lot of it easy.

Let me begin by saying that in my opinion this may not be one of McClelland's better aromatic offerings, but I must disagree with the reviewer experiencing a "sizzling" sound with the initial light. In my view he probably just had the fire turned up a wee bit high.

I found the tobacco easy to light, and after 1 relight and 2 or 3 tamps, it burned clean all the way to the bottom of the bowl. Sorry, no goppy residue at all.

As to the flavor, and I don't smoke nearly as much aromatics as I did 20 years ago, but I found it kind of remenicent of Drug Store aromatics I smoked when I first began smoking a pipe. Smelled great in the pouch, but was disapointing in the bowl. However there was a pleasant nutty taste that kicked in toward the second half of the bowl.

Although I have smoked 3 or 4 Mcclelland aromatics I would rank above this one, I would suspect many aromatic smokers would give it a higher ranking. Personally, I give it 2 stars.

Goopy, stick black cavendish-based stuff. Weird kind of thichish short ribbon cut. This is not one McClelland's lighter brown cav/virg/burley aromatics like Three-Cherry, You know you are in trouble when, immediately on light up, you hear that sizzling sound. Real sweet, too, but I prefer to eat my baklava. At least the flavoring is not over the top. I really like good aromatics, but this ain't one of 'em!

IMO, if you really want a good honey-flavored aromatic, try Peter Stokkebye's Heather Honey. Don't bother with this one.