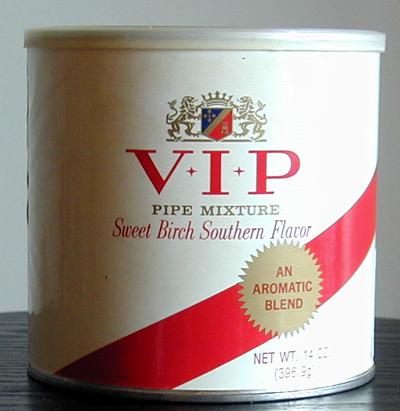 This blend springs from sweet Southern Birch with choice Burley's and Dark and Bright tobaccos. Delightful aroma in pouch or pipe.

The birch taste was the main flavor, and while it did remind me of birch beer, it had no depth. I got a light vanilla hit from the black cavendish, and nearly nothing from the burley outside of slight nuts and earth. Had almost no nicotine. Burned a little fast, and I had to sip slowly because it was close to being bitey otherwise. The flavor was consistent. Left a little moisture in the bowl, and needed few relights. Could be an all day smoke.

I thought this blend was pretty good. The room note reminds me of fresh cut orchard grass, and the taste was somewhat sweet with undertones of.........well birch! I wish this blend was still around. Now off to review the "Match" version, which is no "Match" at all IMO!

I actually discovered VIP a long time ago and had an interest in it's flavor characteristics.The approach to the birch flavoring struck me as very natural.When smoking this mixture I would picture an old mountaineer creating this blend.The result is of natural mellow birch with a hint of spiceyness,and does not taste like root beer.The tobaccos have a masculine taste which make a nice smoking mixture.I can't recommend VIP as an all-day smoke,but it's the blend you want to smoke on your porch while enjoying a view of the mountains.

Excellent for a camping trip under a campfire and birch tree in the Adirondacks. Suggest cutting it with peach flavored tobacco for a real treat. Would smoke great in a cob.

I'd been wanting to try this unusual blend for a long time. The birch flavoring is very unusual but I love it! Don't detect root beer but a mild sweetness that I find very pleasant. Sorry that it's not around anymore but I have a large tin so it will last me a while. Try it if you can find it!

I got this through Thompson cigar renamed Paul Bunyan by lane. After much research found it Lanes VIP renamed by Thompson. A good Burley Cavendish with a Brich vanilla flavor which is very mild. Still almost a very natural tobacco. A good summer smoke. A nice simple Pack and burns well. A nice simple cahnge of pace try it.

Ok, I admit to smoking lots of this in my younger daze(sic).

Call me crazy but I actually liked the birch beer taste and aroma at the time. Unfortunately, the underlying tobaccos are not of very good quality.

Tasty burley blend, and as the others have said, it smelled heavily of birch 'root' beer in the pouch. I have never had birch beer but this smelled like root beer to me, only less sweet. I enjoyed it for what it was, I will come back to this in the summertime. They used a decent quality burley with no medicinal taste as I have found some burleys to have. Very much like drinking a glass of root beer while smoking Prince Albert. I will not smoke this very often, but it could be an occasional change of pace.

I didn't think they made this stuff anymore. I appreciate the occasional mug of birch beer, but I sure don't want to smoke it. The tobacco used is quite marginal. . Try this only if you can get a small sample, and are feeling wildly adventurous. (For heaven's sake use a cob!)

This tobacco is practically dried up straight out of the pouch. The smell of birch beer is overwhelming when opening the pouch. It smokes very hot and tastes nothing like tobacco. This tastes like cigarette papers soaked in root beer syrup. Once you try it, you'll never forget it...and not in a good way...this will give you Post-Traumatic Smoke Disorder! YUCK!

Mixed burleys with some virginia. Tastes like birch beer. Leaves a bad aftertaste. Smokes on the cool side however. It's not that bad but not my cup of tea. {Or mug of Birch Beer}.