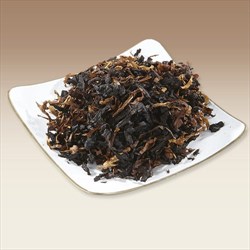 Russ' Monthly Blend - Cinnamon Roll features cinnamon and vanilla notes over a blend of Virginia, burley and black cavendish. The combination of flavors helps to avoid the "hot" cinnamon flavor; it has a flavor more like its namesake.

As usual, I've had an aromatic Sunday. I'm quite impressed with this one!!

It qualifies as more of a mixture than just a ribbon. The pouch contains all manner of shapes and sizes. There's a little more dark brown and black pieces than lighter ones. The cinnamon can be identified in the pouch-note but it doesn't smell that strong. My moisture was perfect.

Cinnamon can often cause an acidulous, harsh, flavour; be it in food or tobacco. But this doesn't have that style. The vanilla and mellow black Cavendish placate any causticity! The doughy tasting Virginia adds nicely, and makes it seem more like a cinnamon roll, than just a cinnamon flavoured blend. The nutty Burley gives it some 'backbone', and keeps the bready Virginia and sticky black Cavendish in check! The burn from it's perfect: cool, steady, quite slow. I don't find it bites unless REALLY forced.

This is a nice blend. Smokes smooth to the end. There's an overall presence of sweetness with varying tones that keeps this blend interesting. The cinnamon hints come through periodically, but not regularly which only adds to the interest. A nice aromatic blend if you're looking for a change of pace. I found it went great with a good cup of coffee. Probably not in my regular rotation or on my short list of aromatics, but I wouldn't be disappointed if I had it again. The tobacco never seemed to clearly pull through, but I can't say it was heavily cased either. If you are looking for a decent smooth smoke with a hint of cinnamon, this is worth a shot.

The first time I smoked this I did not like it, so I put it away for a month. This time I tried it in a new meerschaum, what a difference! The cinnamon was prevalent in the taste, but not over bearing. The tobacco was just a little stronger than most aromatics. Although my wife cannot detect the cinnamon roll room note, she does find it pleasant and I noticed it tend to linger longer that many of the others that I smoke.

Purchased From: pipes and cigars.com

This has become my go to morning coffee smoke. Lately continuing through my morning commute. I find the sweet cinnamon scent carries into the flavor of the smoke very well without being cloying. I've a cob dedicated to this blend, and find the cinnamon infuses the pipe itself, making for a nice symbiotic relationship between this blend and the subtle sweetness of a cob pipe. Makes a nice dessert tobacco as well. Tobacco flavors are there, but in the back round. Perhaps too sweet for an all day puff, but a tasty start to the day and a change of pace from more savory tobaccos. Enjoy!

Buttery and nutty, this is an easy-smoking, smooth aromatic with little bite. I don't really get any cinnamon notes (which might be a good thing.) Overall, a decent aromatic but I probably won't be getting any more, because it just lacks some of the flavor I crave from my other go-to aromatics (Dan's Blue Note, Lane 1Q, HG-2000.)

A crisp and cold, but sunny, January morning. Sitting on the front porch smoking a bowl of Cinnamon Roll while drinking a nice hot cup of coffee. Pure delight.

Russ's Blends are some of the best aromatics available and Cinnamon Roll is no exception. This blend maintains the aromatic cinnamon roll flavor from the first puff to the very last.

It has been a while since I smoked Cinnamon Roll. I ordered two ounces to try while ordering my regular fare because it sounded interesting. Now we are talking a mild warm pastry flavor here not a Red Hot or Hot Tamale candy jolt of flavor. I cleaned and alcohol salted an older metal filtered Dr. Grabow to start out neutral on this test. It is a mild smoke and the cinnamon is lightly and pleasantly in the mix. I was not overwhelmed or underwhelmed but blew through 2 oz. in record time. Suddenly it was gone and I was missing it. Cinnamon Roll is possibly the most comfortable and pleasant pipe tobacco I have yet to smoke. It is a nice tobacco. Any one should at least try it once even if you don't care for aros. I am going to order some as soon as I finish this review. If you drink coffee, as others said, it is a good mix.