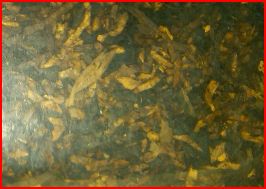 A confectionary delight. A fascinating mixture of Red Virginia, Virginia, Burley, and unflavored Black Cavendish flavored with chocolate and marshmallow.

R18 is a good example of a Danish type blend. Not overly sweet or overly flavored. You still get some tobacco taste here. Nutty earthy burley and a little Vinegar from the red Virginia. Both compliment the Cavendish which is the star of the show. A deft touch of chocolate and vanilla sweet marshmallow are present and are also very good. Does not get goopy, burns to a fine grey ash with very little dottle. Definitely an all day smoke of this genre. I like it while working around the farm as a change of pace smoke. It’s a 3 for me in this blend type.

One of the better smokes from our PG slinging friends at Altadis. Not as goopy as I had feared, not as plastic/chemically as I thought it might be either. I get the better version of Captain Black comparison and think it to be fair. As others have mentioned, this showed up randomly as part of a sampler pack from a vendor. Would I go seek this out and buy it, maybe not. But it is workable option for when you want to puff on something that won't piss everyone off.

I got this in a sampler from Pipes and Cigars. It has a pretty good smell out of the pouch, but tastes rather mild and is what I like to call an Alright smoke. I wouldn't pay for it, but it smells nice and doesn't bite, so I'll hold on to it for now.

Upon opening the bag, it smelled of green/sour apple to me and had a hint of something else I couldn't quite put my finger on. My reaction was to say to the clerk, "Wow, that's different. I think it's worth a try!"

It certainly was worth a try. I can definitely taste what, again I can only describe as a pleasant, sour apple flavor which plays in the foreground with a hint of light cinnamon. It also smoked with a familiar sweet, almost pungent note in the background that reminded me of some of the Lane Limited blends (as does the name). I must emphasize, however, the sweetness is definitely an undertone as this blend has an almost light, playful character that ironically dovetails with the heavier sweetness of the bottom note. I know the listing of flavor agents features liquor prominently, but I would describe the flavor as apple cider with a cinnamon stick, complemented by a comforting, familiar, Lane-1Q- type undertone. I should also add, the "cinnamon" is not some harsh, in-your-face, artificial flavor like you would get in a hard candy or pack of gum; it is a more smooth, mellow, natural flavor akin to real cinnamon when blended in the right amount as a complement to a sugary treat. This blend smokes well and doesn't seem to bite too terribly much, even with my overly aggressive puffing.

The best thing I can say about this blend: It's definitely not monotone, as so many aromatics tend to be.

The worst thing I can say: It's somewhat odd. And that's not necessarily a bad thing, it's just the worst I can say about this blend. It is just odd enough that I can't see myself smoking it obsessively. A couple bowls in a row is almost too much of a pretty good thing. This blend takes a chance, which is what makes it simultaneously likable and easily overdone.

Now the question of stars: From and unbiased point of view, I might actually highly recommend this sweet-n-sour, not-quite- fruity blend, depending on what the consumer is looking for. However, I like to base my recommendations on my own personal tastes and preferences. I rate this a solid 3 Stars -- I definitely recommend it.

I may not keep in in my regular rotation, but I will DEFINITELY be buying it again!

I too received a pouch of R-18 upon ordering a new pipe from P&C. This stuff is wonderful. This is my first review of any tobacco product, so I don't know all of the terminology like casing and such. This stuff is mild to the tongue and yet delivers a delightful taste. I am not a pipe snob, so my judgment of tobacco is limited to answering the question, 'Would you like to smoke another bowl full of this?' Regarding R-18 the answer is yes. Not only that but I plan to buy more, which is what this is all about.

I ordered a new Savinelli pipe online and this came with it, I tried it out and basically is a better smelling better tasting version of Captain Black in my opinion, inside the pouch smells almost like a healthy candy bar (Clif bar ex.) and the smoke is more pleasant than Captain Black. Lane limited discontinued this one but it is made by Altadis under same name R-18 (known as Danish cavendish at Pipesandcigars.com)