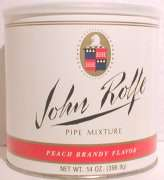 There's a little nut, citrus and grass from the burley and cavendish-style Virginia, more so at the half way point and beyond. Peach brandy dominates the experience, and it's sweet with a few tart, sour notes, though it does weaken a little at the same point the tobacco becomes more noticeable. The main problem is that it gets bitey if you puff fast, so I suggest a slow puffing cadence. Has little nicotine. Burns lightly fast, leaves some moisture in the bowl, and requires an average number of relights. The after taste is sweet and sour, but also has some bitterness. Could be an all day smoke.

When my father quit smoking cigarettes back in the 1960's, he bought a couple of Kaywoodie pipes and a tin of John Rolfe Peach Brandy to help him through. I was just a kid and noticed that dad's pipe smoking career was short lived. Too bad, because I loved the smell of that Rolfe Peach Brandy burning in his pipe.

I snagged an old tin of this 8-years ago on eBay and couldn't wait to try it, figuring that it would bring back a lot of pleasant memories. I got through about half a bowl and realized why dad quit the pipe so suddenly. This tobacco tasted very bitter with no sweetness to match the smell. Worse, it beat the dickens out of my poor tongue which wound up in a sling for a week.

John Rolffe Mixture is the other blend dredged from my early smoking memories by an ebay offering of one boxed pouch of Hayward Mixture plus one boxed pouch of John Rolffe Mixture. In my early smoking days I tried all over the counter blends available in drug and grocery stores (in the back water of my home town there were no smoke shops) and I do mean all - rows and rows of boxed pouches and tinned mixtures. I started in the beginning of the first row and methodically smoked my way through them all to find out what was what - it was fun and I have fond memories of doing it. Some were good and some not so good, but, there were two mixtures that stand out in my memory as failures: Rum and Maple and John Rolffe Mixture. The Rum and Maple I recoiled from, as I had never tasted nor smelled anything like it before. Convinced that a pipe tobacco should NEVER have an aroma or taste like that, it became the first pipe blend that I promptly threw away in disgust after two bowls. I still feel that way about it to this day.

The John Rolffe Mixture was somewhat different, in that I stuck with it for several pipe fulls and gave it a good chance. In those days it was more of a flake cut than the current ribbon cut from Lane. It smoked like Prince Albert with a peach brandy flavoring. I wanted to like the blend but the peach brandy aroma I always found off-putting. However, underneath was a solid smoking mixture of cavendished burley that I liked. Unfortunately, every bowl-full smoked okay down to about the one third point and then it became a little bitter. The cheap peach brandy flavoring and the persistent grottiness that came into each bowl became too much and, inevitably, out it went.

I recently had a chance to smoke the Lane version but one whiff from the small tub I was offered brought back old memories and I passed. Because some of us like this type of blend (note the four star reviews below) I give it two stars.

When I was a youngster, this was readily available in Woolworth's, Walgreens, etc. It was along the same lines as Middleton's Cherry Blend: A decent Burley/Virginia, lightly cased with peach brandy with the tobacco taste coming through. It smelled nice, but not nearly as sweet as the current herd of black Cavendish aromatics.

The last time I saw it was on JR's website, just before it went to the retirement home for old OTC blends, where it joins Bestoval, Edgeworth Ready Rubbed, Brindley's Mixture, and many others. Still, you never know when you might come across an unopened tin on e-bay eh? I wouldn't break the bank for this stuff though if I were you!

Altadis is producing a "match" blend. I will probably pick some up to see if it is anything like the original (as I remember it anyway). The Edgeworth copy is very enjoyable, so I have reason to hope.

What's incredible is just how much these blends morph as they change blenders over the years. Rum & Maple in its original form fairly bragged how it contained Syrian Latakia(!) So, sometimes the only thing left of a blend is just its name...

An exceptional aromatic smoke with pleasant, elegant, sweet peach brandy flavoring. Springtime in a pipe. Just a delightfully doctored burley called a "matching blend" from Habana Premium in Albany, NY, though not a flake cut like the original John Rolfe of my college smoking days. This one is ribbon cut and smokes a little fast. But the fresh, sweet dry as in wine taste sticks all the way from light up to cool down.

Recommend this one with a cob and then you get double sweetness. I admit Im stuck on aromatics with sweet casing. This one is an appropriate tribute to the man, John Rolfe, one of the early settlers of the Jamestown, Virginia colony who according to Wikipedia was the first successful cultivator of tobacco as an export quality crop to old England. And what a classy guy because Rolfe married Pocahontis, fathered her son and introduced her to British Royalty. This is one sweet smoke. Happy Hunting!

I can see why some people might like this baccy. It tastes very rich in Virginias and starts with a mild peach flavor that lasts for about 1/2 of the bowl. However, it does me in just trying to get through one bowl full (which I haven't thus far been able to accomplish).

It may be in some change in the blend because I notice that those who have gone before me purchased it quite awhile ago. But I have tried JR from 2 different blenders and it seems to be the same in every way from both of them.

The pouch note is pleasant with a decided aroma of peaches which is the only thing that I can find that lets it be called an aromatic. The aroma does NOT show up in the room note.

With whatever moisture content I have tried it with, the baccy packs easily and well, lights well and stays lit fairly well. The problem I find is in the taste. All I get while smoking this is strength and harshness. It never actually bites but I feel the ever presence of the threat. It smokes somewhat hot which is why I probably don't get bit because of controlled sips in an attempt to keep the heat down but this results in not much smoke ever being produced. Strength builds and about mid bowl, I have lost any thoughts of pleasure and within minutes have to empty the pipe. Maybe I'm a wimp, but I just can't smoke this any more.

I know that there are those who enjoy much more strength than I can tolerate but I can't honestly go higher than 1 star.

I really enjoy this blend alot. It is, as other reviewers say, a nice nutty burley with a slight peach flavor. It is IMO the perfect aromatic. Not sickly sweet in your pipe and has a great room note. From the can it needs no drying and is ready to go! Burns very easily; if not a bit fast; and will tolerate any packing job you care to use. I've never been bitten by this but smoke slow anyway as it can get bitter if overpuffed. This is always in my rotation burley nut that I am..Hey give it a try you'll enjoy it!

I really expected this to be an aromatic because of it's name. Not that I had by heart set on an aromatic when buying a tub of this stuff but the name combined with the tin aroma had me prepared for a Captain Black sort of experience. Boy was I dead wrong. This is just plain cool dry smoking burley... nothing else.

As with most burleys I've come across you need to smoke this slowly or else it will become bitter. However, smoke it properly and you'll be rewarded with the nutiness you smoke burleys for.

﻿This is a nice blend. It states on the can that it?s peach brandy flavored but it is not your standard aromatic. The peach brandy flavor does come through a bit, but it is mild as the main flavor coming through is straight burley. This has that nutty, toasty taste that straight burleys like Prince Albert have, but with a little bonus of the slight fruitiness of the peach brandy topping. This smokes cool, doesn?t bit nor goop up the pipe. A very dry smoke. The room note is definitely of peach not like fresh fruit, but more like peach cobbler and very strong at that. But I happen to like the smell peach cobbler and it seems to be enjoyed by the people around me. Another tobacco that will become a stale in my rotation and I will always keep on hand. It?s really not hard to see why this is a classic blend.