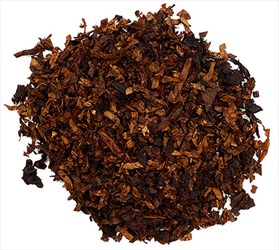 Highly Aromatic. A quality blend of Golden and Black Cavendish flavoured with Brazilian coffee. A gourmet smoke. Alive with flavour.

There's a very minor honey note and slight grassy tobacco taste from the gold cavendish. The unsweetened black cavendish adds a little brown sugar smoothness to the blend. The coffee topping is mild and creamy sweet with a touch of sugar. I noticed the barest hint of bitterness, but I really think it's the kind one can usually expect when they drink coffee. The taste of coffee from the tobacco is a little milder than the smell of the tobacco itself, and could use a little more strength of taste. It does sublimate the tobaccos to a fair extent. Mostly, this is a smooth, fairly easy burning all day smoke with a very consistent, cool and clean flavor to the finish. Won't bite or get harsh. Not much nicotine here. The strength and taste levels are mild. Leaves some moisture in the bowl, but no dottle or goop. Requires and average number of relights. Has a short lived, pleasant after taste and room note. Two and a half stars.

I was given a few ounces of this I have been smoking on the commute. It is described as "highly aromatic" and mine was not. It has a little more topping than Carter Hall, but less than PS Nougat. The golden cavendish and black cavendish combo in the description are on the money. The black cavendish does not have any vanilla. The pouch note is slightly sweet and identifiable as coffee.

Smoked this was a pleasant surprise. It has a flavor I can describe as coffee with cream and one sugar. There is a soft creamy feel to it on the tongue and a slightly sweet, slightly bitter coffee taste. There is not much tobacco flavor, but what little is there is nutty and mellow. It has been easy to smoke and does not require attention.

This is a fairly good mild aromatic. I am surprised it does not get more love on TR. I would like a little more tobacco flavor in there, but the topping is pleasant and smoking characteristics are good.

Well if highly aromatic means no coffee flavor or smell then this tobacco fits the bill. A tasteless waste of money and time (not to mention tobacco). Not recommended.

Awhile back I was on a quest to find the best coffee/espresso Aromatic, and sadly none of the 4 I encountered were acceptable. Having no love of Sutliff products, I am not expecting much from my small 1oz bag, but for scientific research, I bought some.

The open bag vapors give off a general cocoa smell, unlike any coffee bean I've had the pleasure of grinding at home for espresso. This annoyingly thin, flakey cut blend wasn't 'too' overly topped, but was still dusty/sticky and packed down densely like a wad of fish flakes. Burned reasonably well offering a mild smoke that expectedly did not remind me of coffee, giving off a non-natural flavor I can't really pin down. It was meh and not worth the chemicals I surely ingested.

While the flavor was not the worst of the 1 star blends I smoked, I just personally hate and can't recommend blends with paper thine bits and limp cuts.

The blend contains a far higher proportion of brown Cavendish in comparison to the black. The tobacco's cut quite coarsely, there's a bit too much moisture, and it smells strongly aromatic.

#203 is easy to light, and gives a good burn, albeit, too hot a burn. I enjoy the taste, though, as it's more like a cappuccino as opposed to a harsh espresso; there's coffee flavour, quite a lot of sweetness, but I get no harsh or bitter coffee qualities, like I'd expect from an espresso. As well as the heat causing discomfort, adding to the same feeling is tongue bite. This reduces what would be a four star aromatic to a rating of only two stars.

The room-note scores four stars though, and the nicotine's mild.

As an aromatic smoker, the tin note on this was hard to smell. The taste of the tobacco itself was reminescent of a bitter cup of coffee, but the topping wasn't as plentiful as I'd have liked, and left a bit to be desired. Still, I'd recommend it for the coffee lovers, people wanting something new, or aromatic lovers. It's not the greatest but I honestly think this blend gets a bad rap.

I got to try this before a favorite shop went out of business, If you like the thought of smoking coffee than you'll love this blend , smokes and tastes and smells like coffee, tasted as good as chocolate expresso beans yum yum!

This review is coming from someone who loves his coffee and regularly smokes while drinking a cup. I purchased 2 ounces from P&C in December 2016 with a gift card I had gotten for Christmas. The aroma on opening definitely had a coffee scent and the first smoke didn't disappoint. I jarred it and put in on my shelf and broke it out again this morning. The coffee note is still very present. The cut is rough but it packs nicely. The room note is pleasant with a smoky coffee scent present but no overwhelming. The flavors are very similar to a cup of coffee with a bit of sweet and creamer. A very smooth smoke that hits the coffee flavor but doesn't kill you with it. The cavendish blend gives enough of a tobacco presence that you won't forget you're smoking a pipe. Definitely one I could enjoy throughout the day.