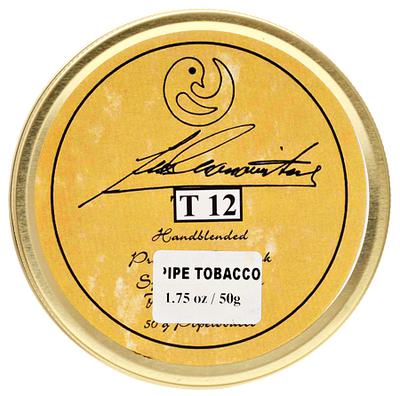 An unusual blend of top grade Virginia with steam cured black cavendish and a hint of Oriental leaf. Beautifully contrasted and mild, with a typically Danish aroma.

The fairly coarse ribbons give off a sweet, slightly aromatic, aroma. I see more brown than black; about 80-20%. My tin had good hydration, perfect for imminent smoking. So, on with the smoke:

To my palate the blend has an unequivocal casing. The initial flavour to greet me was a sort of pastry, nutty, maple-sweet one. It hasn't been added with enough puissance or strength as to completely subconrad or bully the tobaccos out of the way, but it gives the smoke a definite embellishment. The tobaccos aren't too black Cavendish 'sticky', like a lot in this genre. Instead I taste mostly Virginia, with the Cavendish taking a joint support slot with the woody Orientals. Unfortunately I find the smoke too warm, especially when my pipe's puffed with impunity; so, I have to be gentle. It burns steadily, without the need for much work.

T 12? If it weren't for the temperature I'd recommend it, but because of this it gets just two stars:

I thought the above review by Jesse was awsome and right on the mark. This blend is sweet in a very light sense, and will flex its muscles with too agressive puffing. The leave exudes quality, and there's just enough real tobacco taste to suit me.

If you are an aromatic lover, this blend will be pleasing to you, I think. If, like me, you normally shy away from aromatics, you might still like this. It burns slowly, packs easily and stays lit well. But again, don't puff too aggressivly or you will be putting vasoline on your tongue!

*Sep 19 update: I am downgrading my recommendation of this a bit. I loaded up one of my Danish freehands with this for the first time in two weeks. The tobacco didn't seem any drier than the last time I smoked it, but it had lost most of its tin aroma. Smoking it was very, very harsh. I have other tins that were opened for the same amount of time that never lost their flavor as this has, nor did they develop this kind of harshness. The stuff did nothing but bite no matter how gently I sipped. This tobacco needs to be strictly regulated to maintain a high moisture content! The way it is when you first pop the tin, that is the way you need to keep it. Downgrading to two and a half stars for its unruly nature and difficulty in keeping hydrated.

*Sep 4 update: I don't know what happened to this stuff, but it has changed character on me over the past couple weeks. I noticed the other day that it was a little drier than it had been (the tobacco), and stuffed my pipe as usual with it. I lit up, and took a nice, easy draw. Ouch, ouch, ouch; I thought a bee had stung me on the tongue. While a very good blend, I agree with the other reviewers that, if you ain't ceer-full, you will be on a steady diet of ice cream cones for awhile.

I asked my tobacconist for a recommendation on something for a change of pace from the heavy English blends that I usually like to smoke. I specified that I do not, repeat do not, like aromatics. Aromatic tobaccos are, in my opinion, part of that same category as flavored coffee; they're crap. And people who use the stuff should be tied to big boulders, and rolled down steep hills with jagged rocks at the bottom.

Bearing this in mind, my tobacconist pulled down a can of T-12 and handed it to me. Okay, the stuff smelled less obnoxious than most aromatic blends. It fell apart easily, rather than sticking together in a big lump, so the cut and humidity were good. Heck, I'll just smoke a bowl of this stuff right now; a big bowl.

Right off the bat I could tell this was not what I was accustomed to in aromatics. It was sweet like a mild virginia, but without the bite. Surprisingly, it didn't smell up the place like so many cavendish blends. I had to be careful packing it into my big freehand, and following tamps had to be very gentle so as not to end up with the bowl getting too juicy. There was no vanilla odor, no fruity nutty taste; just good sweet and mild flavor and aroma. I don't know that it could be classified as a true aromatic, but that is a good thing in my opinion. It is a nice change of pace when I want a light blend.

While the series lacks imagination in the naming department, I've yet to meet a bad Chonowitsch blend (T14 being the best). This time I decided to shift down a notch to T12 and try one of their Aromatics, which is often my preferred style.

The tin mentions some nutty and Maple flavoring within (as well as some Burley and no mention of Oriental - which differs from the description here). Upon opening, I would agree to a nuttiness' coming from the natural Virginia, but nothing Maple... just a general mild sweetness. In fact the only 'Aromatic' here was a dusty perfume scent, which I found a bit jarring my the time I got to the end of the tin. The mostly light brown mix had a good toasty feel without any stick toppings, nor much Black Cavendish. This was not a candy laden, stewed affair. The bowl sparked easily, releasing the aforementioned Virginia sugar, but never did too much beyond being an easy mild-ish nicotine all day smoker.

For being an 'Aromatic', it was boring, though it never felt cheap on quality, making 12 an appropriate number as it was the gear you start in before moving up.

I wish that I had the ability to pronounce the name without stumbling on my tongue, so I will call it JC/T-12.

The 50 gr tin opened with release of an airlock, and the tobacco was amazingly dry. I like dry, aged pipe tobacco. I was not disappointed at all.

Room Note is very pleasant. Strength, very mild. Did not detect any toppings or casings, only outstanding blending and finishing. Each component of the blend stands forth like a beautiful teaser. Money well spent.

Smoked in an Ebony Rhodesian (Pre-Comoy Archer's), the smoke was mellow and friendly. Absolutely zero tongue bite. This I can attribute to the tobacco being aged for quite some time. Definitely worth squirreling a few tins away!

3-stars is my rating. I think that I will be looking to purchase one of those old steamer trunks which were common many years ago, and start stocking up on my favorite blends. T-12 will be a blend worth storing several tins.

This is a really pleasant tobacco that burns just a little on the slow side and has a charachter that is balanced just about exactly in the "medium" vicinity. Rounded flavor with just enough complexity and a decided slightly sweet note that harmoniously enters as part of a Virgina base. The Orientals in this tobacco add just a hint of weight without making the blend heavy, and their presence is most welcome since they play against the Cavendish wonderfully and add some wheat or nutlike notes. Most pleasing, but can bite if encouraged, so take it a little easy. I would recommend this as a pleasing change-of-pace to a Virgina or perhaps even an English smoker. I enjoyed my sample very much.

While some blends by Jess Chonowitsch have turned out to be small masterpieces, others just leave me confounded. T12 of course belongs to the latter category. Typisch dänisch all right, exhaling quantities of Irish Cream and English Allsorts from the tin enough to hide the natural aroma, if any. In combustion, the amount of oriental leaf just suffices to yield a cigarettish character to the otherwise enjoyable combination of bright virginias and black cavendish. Good burning qualities (cf. below) further benefited from using meerschaum pipes instead of briar. The tobacco is not mild by any means, a good medium in both strength and taste.

There's an aspect to T12 that I have to show gratitude for. For many years, I feared I had become immune to the dreaded tongue bite. Now that was not the case by any means. After the first bowls of T12 I was literally bleeding from the gums and the palate. Reasonable precautions should be taken, including consideration of not opening the tin.