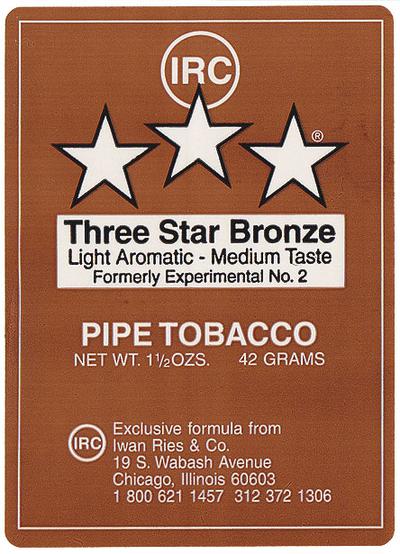 From the eight ounce tin: Starting with a foundation of black vanilla cavendish and a touch of chocolate flavoring. Equal parts of our world famous Three Star Blue and Ries' Affinity are added to a hybrid blend.

There really isn’t a very dominant varietal in this blend, though the nutty, earthy, toasty burley and a little honey, grass and toast from the cavendish tend to be the most noticeable. The grassy, fairly citrusy, lightly dark fruity Virginias play a support role. There’s a small amount of smoky, woody sweet Cyprian latakia present to push the flavor a mite. The plum and raisin from the perique is faint. The vanilla sweetened black cavendish has a lighter touch than expected. The same can be said for the more obvious chocolate topping, which seems to have an alcohol base as I get a note of that here and there. They don’t tone down the tobaccos much at all. The nic-hit is very mild. Won’t bite or get harsh. Burns cool at a reasonable pace with a very consistent taste. Leaves little moisture in the bowl, and requires an average number of relights. Has a pleasant, short lived after taste. An all day, comfortable smoke. Two and a half stars due to the lack of depth, rounded up to three stars.

Do you remember when you were a kid and an older fellow, be it a grandpa, dad or neighbor smoked a pipe? Wherever that man walked, there was that distinct aroma of pipe tobacco: a creamy vanilla extract with some other mysterious scent you could never quite put your finger on. It was a character-defining trademark of the gentleman who smoked it, and like a cologne or aftershave, it seemed his alone. Whatever it was, it made entire areas smell delectable, and you couldn?t wait until you grew up so that you could smoke a pipe and enjoy the same sweet aroma. Three Star Bronze is one of those tobaccos those old, long gone gentlemen smoked. In a vein similar to Wilke?s ?Royal Scot?, IRC ?Old Colonial? or Pipes and Cigars? ?Old Tartan?, Bronze is a blast from the past. Much as I like the immediate gratification from this tobacco and the nostalgia it brings to mind, I?ve clearly outgrown heavily cased, sugary sweet blends. Actually, a better alternative in this genre is ?Three Star Rum Cordial? (see my review). If you?re graduating from Captain Black or Borkum Riff, Bronze is a good choice. However, and a big one at that: it?s gummy and syrupy, and though I might enjoy a bowl on a whim, like St. Paul, I?ve put away childish things. The whole experience reminds me of sickening sweet aftershaves like Brut, Aqua Velva or Hai Karate. Be careful how you use it!

Two and a half of five stars

This blend was fun to smoke because I could load up bowl after bowl after bowl and never tire of it. Just a hint of flavor, and good flavor at that. It is gentle on the tongue and will not produce fatigue no matter how many bowls of it you light up in a day. Better than 3-Star Dutch in that you could taste the tobacco, but not something a veteran smoker will turn to on a regular basis. For something unique and fun to load up with, give this a try!

Sorry to break with the pack here, but this is really great stuff. It is what it is- An American Aromatic. It should not be compared to anything but that class of Pipe tobacco. In that class it is TOP DOG! I taste and smell just a hair of latakia in the blend along with a strong vanilla/chocolate casing that is ever present throughout the entire bowl. Richly delicious, and yes, it is sweet but in a very sophisticated way. Try an ounce before passing judgement.By the way if you do not like American Aromatics do not review it. Why bother? For those of us who understand everything has its place this has earned that place at the top of the AROMATIC food chain. 4 Aromatic stars!

There is a reason why I never ordered any of this blenders products. I'm not really into aros and the thought of "mild" tobacco does nothing for me. This was purely an exploration into this blending house and it's offerings. I had ordered several samples of the products that they offer and proceeded to smoke through them this spring.

Now, given that they are not representative of what I typically like, I will not be ruthless here. There is no reason for me to do that. I give the house of Iwan Ries an overall rating of 2 stars, and that is because there is a following for them that seems quite strong. They just don't do it for me.

If you are one that likes very mild and soft tobaccos with little nicotine, this house is perfect for you and you won't go wrong ordering almost anything on the menu. But, if like me, you are a veteran that likes a little more than medium nicotine, flavor, and body, you probably will be disappointed.

Summary: 2 stars for the entire line of Iwan Ries. I won't waste any more space in each blends category because they would all say the same thing. Meh.

This is one of the best of three star blends . Easy to smoke , no bite , great aroma and would make someone a good all day smoke

This is one of the newer Three Star blends, in the light aromatic catagory. This tobacco does not follow in the classic aromatic catagory IMO. There is no overbearing sweatness to it. It is a cool smoke, with no wet heel in your pipe. I accidently found a very tasty nitch for this tobacco, in that I currently enjoy this with my morning coffee. It is a blend of seven different unknown tobaccos, except for the obvious black cavendish. I find this blend a nice companion with coffee in that several mild spices appear to dance on my tongue, awakening my taste buds, and during the second and third portions of the bowl, the occasional subtle taste of chocolate begins to appear, although not in an overpowering way, notably from the cavendish. This overall presentation makes for a tasty treat while providing a mild, yet flavorful, first morning smoke. I have tried this tobacco later in the day, but find it not to have the same presentation as the first morning pipeful with coffee. This is probably due to switching to richer tobaccos mid-day on, i.e. Dunhill.

This was a little bit meh. It started out very metallic - now that could be simply a reaction to the new corn cob, so I should verify this on a briar - but it wasn't pleasant. Once I got to the middle of the bowl, and had relit the bowl a couple of times, it had sweeter and more pleasant taste. It ended badly - ashy and more of that metallic taste, but that might be more of an issue with technique. I'll finish what I have, but I won't be buying more of this.

Changing rating to "Not Recommended" because, honestly, I wouldn't.

Although I am primarily a smoker of non-aromatic blends, I had occasion to try Three Star Bronze as a change of pace. I can truly say, it was, as the Monty Python sketches used to say, "something completely different". To begin with, the pouch aroma was typically a black cavendish based sensation of vanilla and raisin. It was very moist, so the blend may benefit from some air-drying. Packing and lighting...no problem. The flavor initially was nice, but very light and mild, once I undertook the process of seeking out the flavor, as I am accustomed to tobaccos of a more robust character. It was tasty...pleasant, a little bit choclate-y, an understated sweetness, with a slightly tangy undertone. It was not the coolest smoke I have ever tried, but there was never any harshness or bite, and it finished well: Dry, with a minimum of bowl moisture.

Three Star Bronze is a pleasant, easy going smoke. If you like blends like 1Q, or HS3 by Lane Ltd. you may like this. If you're a novice, definitely consider it. It won't be on my personal listing of favorites, but it's a blend I can recommend to those who are looking for a mild, gently aromatic smoke, one that you can load up and puff on daily without much attention.

Three Star Bronze is another of Ries? many light aromatic offerings. It has a sweetness and subtle spiciness noted upon first light and the taste and flavor do not change much from beginning to end. The cavendish dominates the six other unknown tobaccos in this blend. It is not a tobacco I would smoke on a regular basis but it can be an occasional, welcome change.

A cigarette is to be smoked. A cigar is to be enjoyed. A pipe is to be savored.