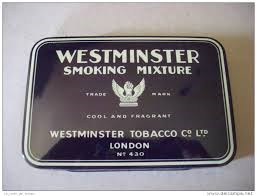 Small dark blue pouch, white writings (no picture available of the pouch, but of the tin only).

This one is dry in the pack, but burns clean, even and a little fast, but it does not smoke hot, nor will it bite. It smokes better with a little hydration. Has very little nicotine. There's not much Oriental here, but it does offer very mild woody, dry spice notes. The Cyprian latakia is smoky and woody, but only has a mild presence. The Virginia is grassy and mildly citrusy as it forms the base of the blend. Has a fairly consistent flavor. Leaves no moisture in the bowl, and hardly needs a relight. The after taste is rather plain. Has very little complexity, but it's a decent work and play all day mixture. It's mostly for people who either want to try English for the first time to gauge their interest, or for those who just want a light, light, light smoke.

Bought in a 40 grams pouch in Switzerland, AD 2013, at average price for common drugstore tobaccoes, quite cheap. Thin cut and less moist than in usual EM, when opened smells like EM, but with a sort of light chemical scent inside...

Aroma: classic EM aroma, with less latakia and less orientals spicy flavour than usual, but surely there is something desturbing inside, seemingly a bad casing.

Taste: not the best of EMs, barely decent. At the beginning it's apparently weak, but half an hour later opinion is changed...

Burning: much faster than usual EMs (Dunhill Standard, i.e.), the cut is too thin.

Maybe the danish way to make an English Mixture... it's cheap (A LOT cheaper than usual or premium EMs) and not so bad, but classic mixtures are an other world! Try something else, and better...