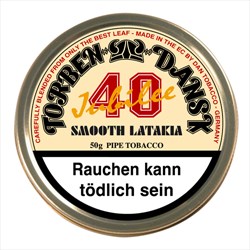 From Danpipe.de: We built this very dark mixture on the basis of a soft, unflavored Black Cavendish and added a 10 percent share of Latakia to it. Rich and complex in taste, subtly smoky and subtly sweet. Slow burning and therefore soft and cool in the smoke.

Having overlooked this, the "other" Jubilee blend by Torben Dansk for a few years, I finally could be bothered to obtain a tin. Long story short: it was long overdue, much to my surprise.

Opening the tin, it's black. Some dark brown in there, but mostly shiny, dark black. A medium ribbon cut, and the tin aroma already declares there's a lot of Black Cavendish in there. May I attribute this blend to Michael Apitz? He most likely had a hand in its creation.

Lighting is easy for something with this much BC in it. The flavour is sweet-bread-ish (Black Cavendish) with some spice to it. The Latakia most likely is mostly Syrian, with some Cypriot in the balance. The most notable effect of the Lat is that it makes the burn uncomplicated: pure BC mixtures are usually hell to keep lit while at the same time keeping one's bowl from glowing a nice cherry red.

The room note is a very nice, dry, airy, bread-ish affair that is quite acceptable. The Latakia makes only for a gentle side note there. Very mild on the tongue, and I would actually recommend this blend for the beginner: it is mild, fragrant, and easy to smoke. I have no dottle left at the end of the bowl, which is quite unusual for something mostly BC.

Took a chance on this, as I thought it was latakia only in the tin. I do not know if it is Cyprian or Syrian Latakia in this blend, but it sure tastes great. It lights and smokes with no problems whatsoever. It burns down to a dry ash at the bottom of the bowl. The nicotine level is just right for me. There was no issues with moisture, as it was perfect out of the tin. Highly recommended for either blending with other weed or straight out of the tin.

Update 11/2/14: I updated the contents in the description to have the correct ingredients in this blend.

There's a sweetness to it that reminds of dark chocolate. Its taste is consistent up until the last puff. It doesn't leave an after taste nor does it spoil your breath.

It's an uncomplicated tobacco.

The room note is tolerable to pleasant.

I, too, would recommend this blend to beginning pipe smokers.

Update: I discovered that the room note is definitely pleasant. I change my rating to highly recommendable, especially for beginning pipe smokers.

It also does well in a pipe without filter, which is not often with DTM tobaccos.

Pipe Used: Any pipe will do

The 50g tin's content was almost perfect moisture wise; I dried it for about an hour. Packs well. Needed a few relights but could be smoked consistently. The taste is mildly sweet which is due to the Black Cavendish. The Latakia, however, balances this blend. It tastes slightly nutty at times, but most of the time you will get that cool, smoky, slightly peppery taste and flavour that makes this blend stand out to me. One thing to criticise, however, is the lack of real depth some other blends like Dunhill's Early Morning Pipe or My Mixture 965 have. Smooth Latakia (or Latakia Blend) gives you a consistent smokey smoke. It is a blend that can be smoked absentmindedly, because your palate will get used to the taste and won't be overwhelmed with flavour. Neither will you get a nicotine kick out of it since it is rather mild. All in all, a perfect smoke for early mornings if you prefer to start the day without having had breakfast. I will definitely buy Smooth Latakia again.

EDIT May 2017: I filled my pipe and puffed really hard to see if I'd burn my tongue and hand. To my surprise, nothing of that sort happened. I could be puffing more than ten times a minute (a little bit excessive, I know) without ever experiencing tongue burn or hand burn. Something I noticed, however, was that the more I puffed the more nicotine I could feel. That's why I've changed strength to a medium instead of mild/medium.

Update 2014-02-25: After smoking a few more bowls and letting the tobacco dry, I am upgrading it to 2 stars. I can taste a pleasant sweetness and a hint of Latakia. Drying makes the Latakia coming through better and the smoke gets more interesting. It is also completely bite free when dried and so I even bought a second tin. --------------

Original review: This is not Latakia only. It consists of unflavored Black Cavendish and 10% Latakia. The tobacco is rather moist and needs some drying. It is very mild and tastes of warm sweet air with a hint of Latakia. The last fifth of the bowl gets acrid and harsh. Maybe it can be used to dilute strong blends. Will not buy it again.