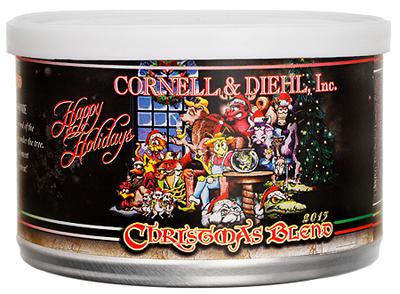 This delightful blend will put smoker’s in mind of the figgy pudding of years’ gone by as they light up under the tree. A touch of Perique supplies the raisin element while the blend of flavors complete the treat!

Let me start by saying that I love Perique, but this stuff is just awful! As soon as I saw this on line I immediately ordered a tin and I couldn't wait to try it. As I opened the tin I was greeted with a pleasant fruity aroma and thought this is promising, but when I packed my pipe and lit the bowl all I got was Perique - a LOT of Perique.

I typically smoke Virginia and English blends, and lately I have even been enjoying some aromatics, but this is by far the worst tobacco I have ever put in my pipe. After a few tries in a few different pipes, with no change, I gave the tin away.

So I finally sat down last night with the intention of thinking of a review for this tobacco. I filled my bowl, let it dry/sit for about 10 minutes, grabbed my drink (Jack Daniels) and went outside. I had been reading the other reviews on this while smoking and was really surprised by the negativity. However as I paid more attention to the description and the tobacco itself, I can definitely agree. The tin note is very pleasant with strong hints of fig, plums, and brandy. That is really where the pleasantries end. The tobacco is hard to light and keep lit during the smoke. There is very little flavor and what is there is quite bitter and harsh. Additonally the room note is almost non-existent. I smoke both strong English blends as well as double ligero cigars, but the nic in this blend hit me hard. I was sitting down and as soon as I stood up I got the "new-smoker" nic buzz. I was so hopeful when initially buying this blend and I might keep the tin just to smell, but I hesitate to smoke this again!

Age When Smoked: 8 months since purchased

I was so stoked to try this, when it came out I went and bought two tins from my local shop. I smoked a bowl right when I bought it after finishing a bowl of Chelsea morning. The taste seemed kind of off from what I was expecting from the tin description, but I chalked it up to smoking it right after an English. The worker at the shop said it smelled great though. A couple days later I smoked this blend again, on its own this time. What an awful experience. This is the harshest tobacco I have ever tried. The tobacco smells absolutely amazing in the tin but tastes horribly harsh in the pipe. I love C&D tobaccos but this is one to pass on. Because I bought two tins, I will let my unopened tin age for a few years and see if it changes anything.

Purchased From: Puff And Stuff

I'm a relatively new pipe smoker so I'm still adjusting to the taste of different tobaccos. However, this is terrible stuff.
I cracked the tin and was greeted with a sweet, fruity aroma. So promising.
However, when lit, none of that came through. Even the room note lacked anything present in the smell. It was a very Perique-ey, harsh, smoke. Not enjoyable at all. I forced myself through the first bowl and then gave it a second try a few days later to no avail. I dumped it out and cleaned my pipe within five minutes.

I agree with the other reviewers. In fact, my experience was identical. On opening the tin, it smelled fruity and almost liquor like. I thought, "Boy, I have to get more of this before it's sold out!!" I couldn't wait to try it and although I had a couple of other "holiday" blends to sample, I went for this one first. But within the very first few puffs, my body reacted to the nicotine. This almost never happens even with strong tobaccos till at least mid-pipe. The strongest quickest nicotine reaction I've ever had. I couldn't believe it. In years of trying different tobaccos this one had to have the biggest gap between the experience of smelling the tobacco in the tin and smoking it in a pipe. But I persevered hoping the taste would make up for the kick. Alas there was nothing to it and I gave up. It was like getting a great Christmas gift you thought you'd love and having it break apart the very first time you use it.

On the other hand, if you can't get enough nicotine than this tobacco is for you.

The appearance is a monochromatic ribbon of milk chocolate color. The consistency is perfect. There is no dust. The tobacco is ready to be consumed right out of the tin, which unfortunately had no date on it, but I assume it was released in late 2012.

Despite the many years of aging, I was greeted by a multi-faceted bouquet of fruit and berry flavors, dominated by dried prunes. In addition to figs, dark raisins, dried apricots, dried cherries with salt - and all this is heavily flavored with cognac. The bouquet is so dense that you can barely smell the tobacco from underneath. Nevertheless, I managed to catch a slight spice and a faint bread note.

The taste, surprisingly, is not as bright as it smelled. Moreover, it is quite tobacco-like: a flavor of wheat bread, a faint earthy note, a fair amount of white pepper, as well as some proportion of prunes from topping and cavendish. With sufficient sweetness, the tobacco is, however, somewhat pungent in the beginning of smoking. But afterwards the taste changes to softer, though all the harshness does not go away. The tobacco bouquet also changes: the bread note intensifies, followed by woody notes, a bit of cinnamon, cardamom, and dried apricots. If you can imagine a pie filling by its smell, it tastes like a finished pie with spices and prunes. Towards the end of the pipe the flavor becomes quite tobacco-like, and the topping is barely perceptible. The tobacco smokes medium-hot, so I almost didn't miscalculate when I picked up the biggest pipe I have, the one with the thickest bowl walls. "Almost" because the tobacco turned out to be strong enough for an aromatic. I'd say its strength was slightly above average - somewhere in the middle of the pipe I felt a slight but palpable nicotine kick. The tobacco burns, leaving a dark gray ash and almost no moisture.

The smoke from the tobacco has an earthy, woody note with a raisin complement. It lays a light canopy and disperses quite easily.

What's the result? A very good blend that could be classified as typically American if it weren't for the large amount of topping. It seems light, bribing with its flavor, but be careful if you're lucky enough to buy it - that impression is deceptive. Actually, I can understand, why the rating here is so low - it is very 'complicated' blend.

My nephew grabbed this out of a box pass before it got to me. He didn't like it so much and gave me a good sample of it. I did like it. For some reason the topping was really light to my tastes. There is no doubt a lot of perique in the blend. It really reminded me a lot of Old Joe Krantz.

As I like OJK, it stands to reason that I would like this blend as well. For those familiar with OJK, it is a very strong VaBurPer, with heavy emphasis on the latter two ingredients making it a very strong earthy blend. I don't think this is quite as strong as OJK, but it is definitely a strong one.

Other than that there is little I can say about it. I recommend the blend even though you can no longer buy it new. I am not sure I would pay too much for it though and I imagine, like any other limited edition tobaccos, it is selling at a premium. If you are into collecting these, you will buy it anyway. But if you are strictly looking to taste it, buy a couple ounces of OJK in bulk and enjoy.

The tin note is delicious. Figs, fermented fruit, maybe a bit of liquor. It could use a wee bit of drying previous to smoking. I did notice that it does not take to the match all that well requiring quite a few relights.

The first portion of the bowl is all perique. It starts to settle down a bit as we go. Burley starts to peek it's head out followed by a tinge of sweetness from the Virginia. The perique,while still remaining dominant, changes throughout the remainder of the bowl. It goes from figgy to pure pepper.

This may not be everyone's cup of tea but I find it alright. I will note that with most of these seasonal blends I prefer to buy this Christmas and cellar until next year. Sort of a present to myself. I feel it gives these blends a chance to mature a bit. Enjoy!

I must admit, I was afraid to light up upon reading the aforementioned reviews. As a seasoned pipe smoker, yet a review "newbie", I had to give this blend a whirl. As a daily English smoker, I DO enjoy an aro on occasion. The tin I purchased was much too moist for my liking. I allowed the tin to dry out for about 45 minutes and proceeded to light a bowl. I was surprised by the tobacco. To me, it was VERY complex for any aro that I have tried in the past. I believe the key to a pleasant pipe bowl of this blend suits itself best to a small bowl pipe and a very slow smoke. I was able to find in this blend, definite tastes of fig, raisin and only a favorable Perique note. I actually liked the blend!! This is only one man's humble thought...

Wow, the haters on this tobacco. Well, I liked it. Would have bought more if my store had some in stock. The Perique really gives it a decent strength. It has a nice plum/fig smell to it which makes it feel like a Christmas blend.