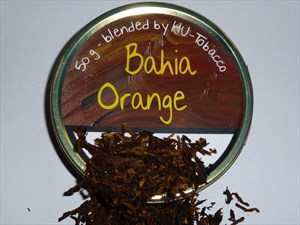 Bahia Orange is a dark pressend ready rubbed flake from Indian and Brazilian Virginia leaf, spiced up with some little unflavored black cavendish for interest. A delicate infusion of sweet nut, dark chocolate and bitter orange presents a distinct, likewise balanced flavor. Bahia Orange is an anything but everyday smoking pleasure with a sweet and spicy taste.

The orange flavor immediately presents itself at first light in a mild to medium way. It's always noticeable, but never dominates the show. After a few puffs, the dark chocolate called out to my taste buds in a delicately mild whisper. The chocolate gets even more subtle as you go along, but you always feel it's there. The toppings do not drown out any of the earthy, woody, lightly citrusy, and grassy, slight spicy, tangy dark fruity Virginias or the brown sugary black cavendish. The latter is just above being a condiment. The strength and taste levels barely reach the medium threshold. The nic-hit is a step short of the center of mild to medium. Won’t bite or get harsh. Burns slow, clean and cool with a very consistent sweet flavor that translates to the short lived, pleasant after taste and room note. Leaves little moisture in the bowl as it burns to ash. Requires a few relights. Can be an all day smoke.

Upon popping the round tin, I’m greeted with a heavenly aroma of orange and chocolate. It’s neither chemical nor overpowering. I would describe the tobacco as rubbed out, broken flakes. They are lightly moist, but can be smoked as is.

It lights easily, and my initial impression is what I can only describe as Orange Crush. It’s unique and captivating. It quickly morphs to a mouthwatering, plain orange. I also sense mild notes of hay, bread, cocoa and spice. The Orange Crush and spiciness re-emerge with quick puffing.

The burn rate and body are midway between mild and medium. The nicotine level is mild. It’s neither harsh nor syrupy. It smokes well in briars and cobs.

Bahia Orange is my benchmark of aromatic blends. The topping doesn’t drown out the high quality tobaccos, it enhances them. It’s a very pleasant all day smoke, and will be appreciated by all pipe aficionados. If it were available in the United States, it would be in my rotation.

HU Tobacco Bahia Orange - The secret to this amazing aro is to let it dry in open air for a few days before piping - this reveals the absolutely highest grade tobaccos and their flavors with a creamy orange topping that compliments beautifully with balance and deep complexity!

Similar Blends: None.. in a league all it's own..

Bahia Orange presents itself more like ready rubbed than ribbon cut. The tin note does welcome you indeed with a distinct chocolate, sweet orangey-fruity scent, imbedded in something alcoholic. Very inviting and fresh, perfect on late summer evenings.

Dark, ripe and full VAs dominate in taste. Hints of dark chocolate are present, but in a supportive way. Now the orange is not sweet anymore, has become even more discrete and is rather sensed in the nose than on the tongue. This feels and tastes not per se like an aromatic, but like an aromatic for lovers of pure quality tobaccos.

For those who care: A filter takes away the subtle finesse in this blend, so I preferred it in pipes without filter. It burns very slowly, doesn’t bite at all and is low to medium on nicotine. Bahia Orange stays naturally sweet and spicy until the end of the bowl.

Pipe Used: Briars with and without filter

This is an Aro with a lot of tobacco flavour in it. Smells really nice like bitterlemon, orange and dark chocolate, very tasty. As soon as it's lit, the tobacco kicks in, mild and gentle with no tonguebite at all. You get a big amount of tobacco flavour with a chocolate-orange taste, that's allways present but never too much.

I usually like most of the HU Tobaccos. Unique and great stuff they are. This one ... I'm not really sure what to think about it. I smoked it out of different briars (big head, medium head, small head; all with a filter) and never really liked it. The smell of oranges and dark chocolate out of the tin is rich and full, nearly overwhelming. It awakes great expectations! Unfortunately a lot of the smell doesn't come through as taste after lightning. It's somehow nutty, maybe a hint of chocolate is detectable. But for my taste buds all of the rich orange is lost. I finally gave it a try in a little meerschaumpipe ...and there was surprisingly a bit of orange finally. But it still was not as expected. Dont get me wrong, it's a solid tobacco (the tobaccos used by HU are as always top notch), but not much more than that. It burned cool and was easy to light in all pipes I used and is a socially acceptable tobacco because of its aromatic room note. Would I buy it again? Nope. There's better stuff from HU out there.

Age When Smoked: fresh and about 2 years

Interesting blend. Obviously high quality broken flake topped with orange. The tin note is very orange-y, but is much less apparent in the smoke. Mostly a sour, somewhat fruity note. I feel like the Virginias in this blend are somewhat young, making this blend more one-dimensional and somewhat sour than I would like. I expect it will age beautifully though, and expect great things in 5 years.