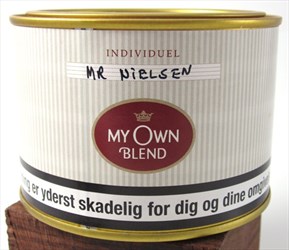 Notes: This mixture is made by My Own Blend Special Blends tobacco blender Lasse Berg in the memory of Mr. Steffen Nielsen who started the famous pipe shop The Danish Pipe Shop. The tobacco is made in development and dialogue with the son of Mr. Nielsen.

The blend's quite coarse, there's one or two leaf like pieces, and also some twiggy bits; this isn't a real problem though, there's not loads of them. The smell is strongly aromatic, the tin carries quite a good note of wine. As always with P.O. the water content couldn't be any better, so on with the smoke:

Firstly, igniting Mr N' is as easy as a blend can be, and my initial thought is directed towards the smokes thickness: it's almost chewy! And then, once an even burn has established itself, it's quite a pleasant smoke. I'm not sure why red wine isn't listed as an aromatic additive, the smoke has a more than obvious hit to it. The other aromatics work together nicely: at first it's the chocolate and vanilla running the show, it takes until I get past halfway for the almonds to cut through. So that's the aromatics dealt with, now on to the tobaccos: the sweetness from the Cavendish gets a little confused with the sugary toppings; the chocolate and vanilla cancel it out somewhat. The Oriental and Latakia make up a large part of the smoke: slightly sour, woody, and smoky. The Virginia gives a crystal-clear grass note: this really picks the lazy flavour up. I wouldn't say the nicotine's any more than mild to medium, and the room-note isn't any better than pleasant to tolerable.

This is a good blend, but it falls short of getting a high recommendation:

The blend is made with mild Virginias, cavendish, oriental and a pinch of Latakia. It has a wonderful aroma of redwine, vanilla, chocolate and almond. Its a very interesting "modern" tobacco meaning a hybrid between a modern aromatic and an old school English mixture. I like the three steps you have when you smoke this. First you think "Aha its aromatic" but the aromas are pretty neutral and then the spicy parts come in and in the end you get a little kick. I would rate it as a medium plus in strength and I smoke it a lot. Its easy to fill and light and the aromas hide the oriental parts so people are crazy in a positive way with the smell.